Scientists at Scripps Research, IAVI, the Ragon Institute and Moderna, Inc., have come together to make critical advances in developing an effective vaccine against human immunodeficiency virus (HIV).

The findings were published on September 29, 2022, in Immunity in two individual papers. The research describes the first steps in a vaccine approach that aims to prompt the creation of broadly neutralizing antibodies (bnAbs)—antibodies that are broad enough to fight and protect against many different variants of a virus. By identifying the most promising bnAbs and the human genes needed to make them—as well as designing protein and mRNA vaccine candidates to begin bnAb creation and verifying the vaccine candidates—the team is paving the way to create an effective HIV vaccine.

“Our two studies describe a collaborative effort to genetically and structurally understand bnAbs, and ultimately ‘reverse engineer’ vaccines to elicit these bnAbs,” says senior author William Schief, Ph.D., a Scripps Research professor and executive director of vaccine design at IAVI’s Neutralizing Antibody Center at Scripps Research. “HIV has remained one of the most difficult viruses to protect against because of its natural ability to quickly mutate and evade capture from the immune system. Working closely together across scientific disciplines and institutions, our team’s findings mark a crucial step forward in overcoming these historic hurdles and creating an effective HIV vaccine.”

Researchers have long studied how a small percentage of infected individuals with HIV are able to make bnAbs. Even when bnAbs do develop during infection in these cases, they arise too late to help block the virus. However, researchers have demonstrated that bnAbs can protect against the virus if they are present before a person gets infected with HIV. This observation has led scientists to try to develop vaccines that induce bnAbs in healthy individuals, but designing such vaccines has proved difficult.

The new work at Scripps Research, IAVI and Ragon aims to break the logjam by carefully choosing the bnAbs to elicit, and then designing custom vaccines that coax the immune system to produce the target bnAbs in a stepwise manner. The team focused on bnAbs that bind to the apex of the HIV spike protein (analogous to the spike protein of SARS-CoV-2). These apex bnAbs employ extremely long loops (called HCDR3 loops) to pierce the spike protein like a spear. By binding to the apex of the HIV spike, the bnAbs prevent HIV from infecting human cells. 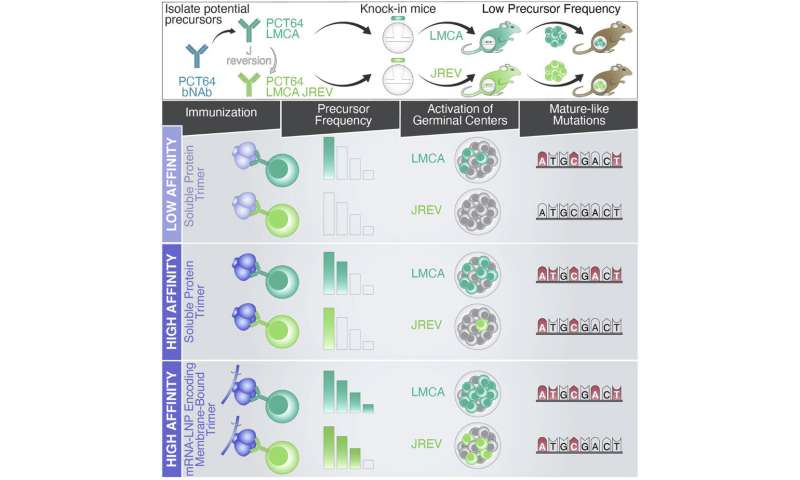 The scientists first needed to determine if the general population had the precursor cells that would eventually lead to the creation of these potent bnAbs.

“Finding the bnAbs we need is like searching for a needle in a haystack,” says co-first author of both papers Zachary Berndsen, Ph.D., assistant professor of biochemistry at the University of Missouri. “To make an effective vaccine, we must first find the precursor antibodies that can eventually become bnAbs, while also seeing if those precursor antibodies are common enough throughout the general population to stimulate,” adds Berndsen, who was previously a research associate in the lab of Scripps Research professor Andrew Ward.

All bnAbs mature from a type of antibody-producing white blood cell, called a naive B cell. These B cells are often referred to as “germline” precursors. Through bioinformatic analyses of a massive database of 1.2 billion human antibody sequences, the researchers learned that two apex bnAbs had the most frequent precursor B cells. This discovery led the team to focus on developing a vaccine tailored to induce those two types of bnAb.

“The long HCDR3 loops in apex bnAbs are rare in human antibodies, thus one might expect that precursors to these apex bnAbs are also rare,” says co-first author Jordan Willis, Ph.D., senior principal scientist at the IAVI Neutralizing Antibody Center at Scripps Research. “However, we found that two classes of apex bnAbs had relatively common precursors, so we decided to focus our vaccine design strategy on those two bnAbs.”

“The first step in designing a vaccine to induce these apex bnAbs was to engineer a priming immunogen with a high binding affinity to the right germline precursors,” says co-first author Krystal Ma, a Ph.D. graduate student at Scripps Research. “The next steps will be to design a series of boosting immunogens that can mature the precursors into bnAbs.”

After many rounds of design and extensive in vitro testing—combined with cryo-electron microscopy “snapshots” from the Ward lab, which provided insight into how the virus might eventually fight back against the bnAbs—the team created a successful priming immunogen. 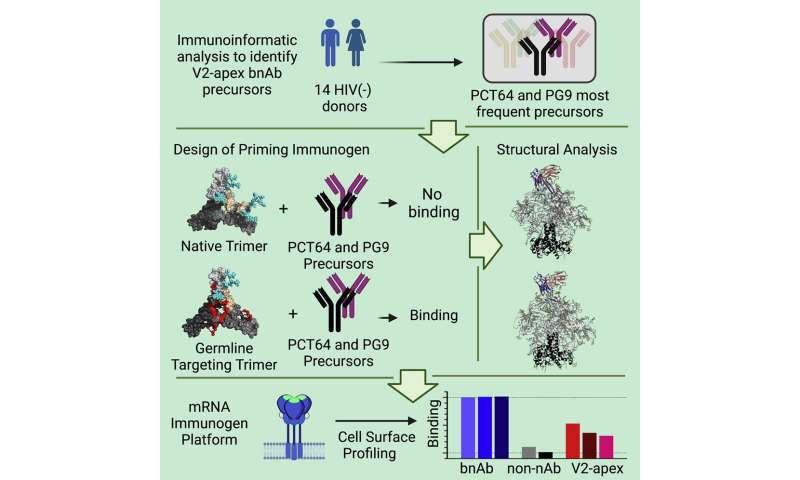 The Scripps Research and IAVI scientists collaborated with the lab of Facundo Batista, Ph.D., associate director of the Ragon Institute, to show the new immunogen was able to successfully bind to the germline precursor B cells and elicit the desired responses in mice expressing the bnAb germline genes at the same low frequency they appear in humans.

“This is a very important step, as it shows that vaccinating with our immunogen can actually elicit responses from the precursors we were targeting,” adds Willis. “We also showed that vaccinating with an unmodified HIV protein could not elicit those responses, which proves that our affinity engineering was required.”

The antibody responses have potential to develop into bnAbs that could fight HIV, which the scientists will attempt to achieve in future studies with different boost immunogens that are still in the design stage.

“We and our collaborators are building on this approach, developing and testing immunogens to drive the later stages of bnAb maturation,” says Batista.

As a successful vaccine must be viable from a manufacturing perspective as well, the team collaborated with scientists from Moderna to successfully formulate their germline-targeting immunogens into mRNA vaccines (similar to the COVID-19 vaccines). This approach gave even better antibody responses in the mice than the typical vaccine formulation, while also being much easier and faster to manufacture.