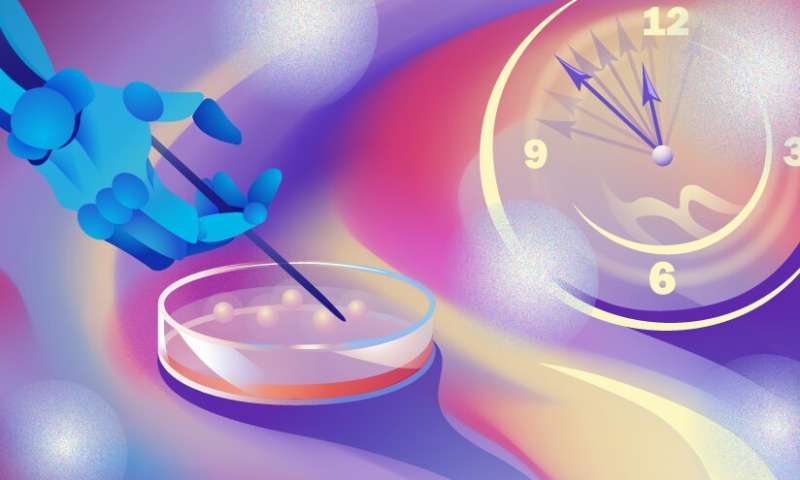 The method currently used to produce stem cell-derived tissues has a very limited throughput. By semi-automating tissue differentiation, researchers from MIPT and Harvard have made the process nearly four times faster without compromising on quality. Presented in Translational Vision Science & Technology, the new algorithm is also useful for analyzing the factors that affect cell specialization.

The retina is a tissue of the eye that consists of several layers of neurons forming a chain. It senses light and preprocesses visual information before feeding it to the brain.

Because of their limited potential for regeneration, the loss of retinal neurons leads to permanent blindness. Today about 15 million people in the U.S. alone have retinal degenerative diseases. This number is growing, mainly because of population aging.

Medical researchers are pursuing a number of approaches to address retinal health issues. Some of the options are neuroprotection, gene therapy, and cell replacement. While these approaches target different diseases and employ different mechanisms and methodologies, one thing is universally true: Their development requires massive amounts of retinal cells for research purposes.

It is possible to grow retinal tissue in vitro. This involves placing stem cell clusters into a special medium that induces the spontaneous formation of undeveloped neurons, followed by their differentiation into retinal cells. That process produces actual retinal neurons organized as complex tissue, without any external stimulation of development pathways during specialization.

The method has its limitations, though. For one thing, it has to do with the random nature of the initial neuron growth stimulation. A further inconvenience is that it takes 30 days for the artificial retina of a mouse to develop correctly, and up to one year for human organoids. The MIPT-Harvard team made an attempt to address these problems by increasing the number of cells produced and improving their quality.

The researchers compared the quality of the robot- and human-grown cells by producing several thousand retinal tissue samples for automatic processing and the same amount for manual handling. The biologists scanned the welles housing the tissue samples from the first group and analyzed the resulting images with a Python script they wrote to perform that specific task. The program determines the areas in the photos where the glow of the fluorescent protein is the strongest. Since this protein is only produced in developing retinal cells, the high fluorescence intensity points to the parts of the sample with the right tissue. That way the software can determine the amount of developing retina in each organoid.

The automation algorithm was able to optimize cell production by simultaneously testing many systems—without any adverse effect on tissue quality. The approach reduced the time researchers needed for cell processing from two hours to just 34 minutes.

“We implemented automated liquid change during retinal differentiation and showed it had no negative effect on cell specialization,” commented Evgenii Kegeles of the Genome Engineering Lab at MIPT. “We also developed a tool for automatic retina identification and organoid classification, which we showed in action, optimizing cell specialization conditions and monitoring tissue quality.”

Kegeles added, “One of our goals in this research has been to scale up cell differentiation to enable a high-throughput tissue production for drug tests and cell transplantation experiments. Automated sample handling makes it possible to reduce the effort on the part of the personnel and produce several times more cells in the same period of time. With some slight modifications, the algorithm would be applicable to other organoids, not just the retina.”