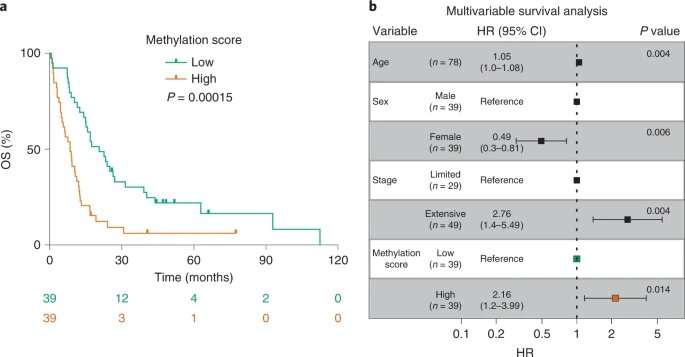 Doctors could one day diagnose and characterize early stage small cell lung cancer (SCLC) with a simple blood test thanks to a transatlantic study led by CRUK Manchester Institute Cancer Biomarker Center researchers at the University of Manchester with a team at Memorial Sloan Kettering Cancer Center in New York published in Nature Cancer.

The study focused on a new sensitive blood test to detect, characterize and monitor small cell lung cancer (SCLC), the most aggressive form of lung cancer.

SCLC is a fast-growing type of cancer that can rapidly spread to other parts of the body through a process called metastasis. Most small SCLC patients, representing 10–15% of all lung cancer cases, are diagnosed late with advanced metastatic disease and few survive beyond 1 to 2 years. However, of the minority of patients with SCLC who are diagnosed very early and have surgery, 6 out of 10 can live for 5 years or more.

They focused on making their method sensitive enough to find methylation modifications in the very low levels of DNA shed from a patient’s tumor into the blood stream, known as called circulating tumor DNA (ctDNA). The test was sufficiently sensitive and accurate to detect methylation of ctDNA, even from patients whose tumors were diagnosed at the earliest stage.

The standard treatment for SCLC is chemotherapy, but there are multiple types of SCLC that, recent studies suggest, would respond differently to a range of therapies. The new blood test developed by the team could also classify which type of SCLC is affecting a patient, supporting the potential for more personalized treatment options.

Professor Caroline Dive, who led the study, said, “SCLC is a terrible disease, causing so much anguish to patients and their families. We think this blood test could be really useful in future clinical trials of new therapies to predict and monitor treatment responses.”

Dr. Rothwell, who led the laboratory work, said, “A key advantage of blood-based molecular subtyping is that blood is much easier to collect and is able to circumvent the challenges often encountered in analyzing scant and often extensively necrotic tissue associated with tumor biopsies. Our study opens up the exciting possibility of detecting SCLC earlier and assigning patients to more personalized treatments.”

Prof Charles Rudin, chief of thoracic oncology at Memorial Sloane Kettering Cancer Center who leads the global consortium that defined the different types of SCLC, said, “To our knowledge, this is the first published study to show that DNA methylation analysis of a blood sample can identify the SCLC molecular subtypes. Though further validation is clearly now needed in a larger independent patient cohort, this blood test could one day assist clinicians in choosing better treatments for SCLC, which is currently notoriously difficult to manage.”

Dr. Marianne Baker, research information manager at Cancer Research UK, said, “These promising early results show that the CRUK Cancer Biomarker Center is leading the way in developing liquid biopsies. These could allow doctors to spot a person’s lung cancer earlier, and even track how a cancer changes over time, helping them to choose the best treatments.

“Many people with small cell lung cancer are diagnosed too late to be eligible for surgery, and this reduces their chances of survival. We urgently need ways to detect it earlier and blood tests like this have the potential to help us achieve this goal.