I have chosen the path of least resistance with my daughter’s sleep. Which is to say that when she wakes in the night I, semi-comatose, bring her into our bed. My sleep, while fractured, is less disturbed than if I was getting up to resettle her regularly and my partner gets the odd kick to the side of the head as she shifts around in bed between us but, it hasn’t broken either of us to the point of actually doing something about it.

We are not the only parents opting for chronic low level discomfort over the short, sharp pain of change. 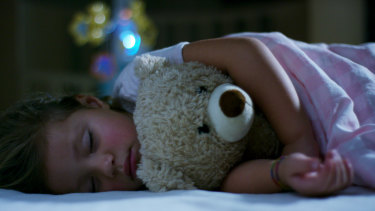 There are techniques that do work to help children sleep, promises expert Dr Michael Gradisar.Credit:Shutterstock

Dr Michael Gradisar is a paediatric sleep expert from Flinders University. In 2006, when he started South Australia's Child and Adolescent Sleep Clinic, he had “no idea” whether children experienced the same sorts of sleep problems as adults.

As families started trickling through the doors, he noticed a “common theme”; children weren’t able to fall asleep without their parents. They would either fall asleep in their own bed before “waking up and freaking out” and ending up in their parents’ bed for the rest of the night or they were already sleeping in the same room as their parents, either in the same bed or on a mattress by the bed.

“One boy, a 13-year-old, had never slept independently of his parents,” Gradisar recalls.

It turns out about half of all children experience sleep problems at some point and, when they are ongoing, they exhaust the whole family.

This is why Gradisar says he understands when parents take the path of least resistance, even though sometimes it means inadvertently exacerbating the problem.

It affects up to 30 per cent of children, making it the most common sleep problem and often overlaps with anxiety.

Gradisar explains that if a child is lying in bed at night, wide awake, their imagination and thoughts often start to take over. They might hear a noise outside and think someone is trying to get into the house and believe they need to stay alert and listen out in order to protect their family. In this way the wakefulness feeds the anxiety which feeds the wakefulness.

Based on his 16 years of clinical experience and research into which treatments work the best, Gradisar says he has “honed it down to two treatments that are very quick and take about one to two weeks”.

What the later bedtime is, depends on the child, Gradisar explains: “The best bed time for their child varies like sleep duration.” 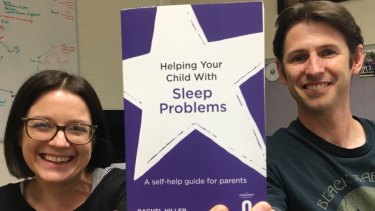 After calculating the bed time for one eight-year-old girl who came to his clinic, Gradisar was surprised to find it was 11pm.

In their new book, Helping Your Child with Sleep Problems: A self-help guide for parents, he and co-author Rachel Hiller explain that the sleep needs of children differ – just like their height, shoe size and weight differ. For example, 80 per cent of 8-year-olds obtain 9 to 11 hours sleep but having more or less does not necessary mean they have a sleep problem.

Similarly, the time children need to go to bed can vary greatly.

After calculating the bed time for one eight-year-old girl who came to his clinic, Gradisar was surprised to find it was 11pm. “I remember the dad going ‘what?’ and I wondered if I had calculated it correctly but they came back one week later and she was no longer waking through the night.”

The calculation is based on the child’s current bed time, the time they wake up in the morning as well as the amount of sleep they usually get, and how they are functioning throughout the day.

It is their ability to function well throughout the day that is a far greater predictor of whether they are getting enough sleep or not, Gradisar stresses.

The second treatment they use for childhood insomnia involves cognitive and exposure therapy.

“We examine their fears and try to replace them with more realistic thinking,” Gradisar says. So if a child is afraid to sleep for fear that noises outside are threats to their family, he might start by asking them what others things could be making that sound.

The exposure part of the therapy involves very gradually showing the child they are safe to sleep in their room. In some of the families he works with, the child won’t fall asleep unless their parent is under the cover with them, so exposure therapy might involve the parent lying with them on top of the cover and then at the end of the bed and then sitting on a chair by the door and then just outside the door “until the child gets used to the idea” that they are OK.

While it’s tempting to give in to a short-term solution, the more we do it the harder the habit can be to break, Gradisar warns. He also points to research which has found that children who sleep in their own bedroom have more sleep and more consistent sleep, which frankly is a victory for everyone.

Dr Gradisar joins a team of international pediatric sleep experts on March 1, 2019, to participate in a World Baby Sleep Day question and answer event on Facebook.com/pedsleep