Public health officials believe that discrimination against people who are overweight is partly for blame for our dismal progress against the obesity epidemic.

Despite the fact that one in three Americans and one in four Brits are now obese – a condition we now know is partially genetically driven – these people are still pervasively blamed for their own condition.

And, according to the authors of the new study, from the University of Liverpool, this stigma has been shown in prior studies to actually stand in the way of people with obesity’s efforts to make healthy lifestyle changes. 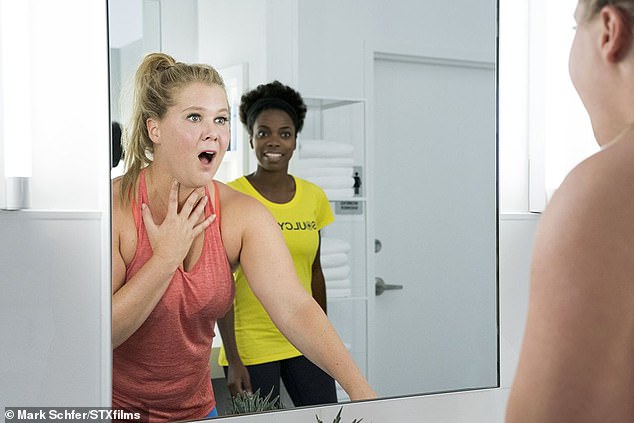 In the film I Feel Pretty, Amy Schumer (left) plays on stigma around body weight. Her character sees herself as beautiful, in spite of not having a body like her fitness instructor – who is skeptical of Schumer’s confidence. A new study found that slim people tend to see overweight people as ‘less human’ than others

There’s no denying that obesity is a health epidemic.

Obesity rates have tripled worldwide since 1975, according to the World Health Organization.

And it’s become clear that obesity not only raises risks for but causes some cancers, heart disease and type two diabetes.

For those who are overweight or obese, conflict and judgement only serve to facilitate unhealthy habits like over-eating, rather than encouraging people to stick to healthy diets and exercise.

But stigma remains one of the most considerable barriers to better health outcomes for overweight and obese people.

In particular, the view of others as less ‘human’ or less ‘evolved’ has been shown to fuel conflict through support of divisive policies in the setting of race-relations.

The University of Liverpool study authors tested both how slimmer people view their overweight peers and the likelihood that these people might support policies that are detrimental to overweight and obese people.

In surveys distributed to 1,500 people divided across the US, UK and India, they asked participants to rate how evolved various groups of people were on a scale of one to 100.

Respondents also gave their weight and height (to calculate BMI).

In some treatments, participants were given the option to donate either to a charity that would benefit people in general or one that would fight animal cruelty.

In other treatments, they were given the choice of the same animal charity or one that would benefit obese people.

Overall, people were more likely to rate obese people as less evolved than others.

And the lower someone’s BMI, the more likely they were to give the obese group lower evolution and ‘human-ness’ scores.

The extent to which someone was evolved was measured using a slider under a rather crude series of five silhouettes ranging from that of a chimp walking with its knuckles to that of an upright, relatively modern-looking human man.

Across all of the study treatments, obese people – whether American, Indian, British or Arab – were rated as ‘significantly’ less evolved and human (at least statically speaking).

In one of the study treatments, people were asked if they would rather $0.50 was given to a charity supporting American people to a charity against animal cruelty.

About 40 percent of participants chose for $0.50 to be allocated to a charity benefiting Americans, while the rest – 60 percent – said they would rather donate to an animal charity.

But when the human charity was specifically for ‘obese Americans,’ support for humans dropped dramatically – just 16 percent picked it over the animal option.

People in India rated the humanness of obese people most harshly, but Britons and Americans also rated their overweight compatriots lower.

‘This is some of the first evidence that people with obesity are blatantly dehumanized,’ said study co-author Dr Eric Robinson, a behavioral psychologist at the University of Liverpool.

‘This tendency to consider people with obesity as ‘less human’ reveals the level of obesity stigma.’

Previous research has demonstrated the tendency to use animal imagery to describe overweight people and their behavior – such as ‘pigging out’ – a more subtle dehumanization.

But the new study underscores just how deeply and glaringly society on the whole dehumanizes overweight and obese people.

‘Obesity is a complex problem driven by poverty and with significant genetic, psychological and environmental components,’ Dr Robinson said.

‘Blatant or subtle dehumanization of any group is morally wrong and in the context of obesity, what we also know is that the stigma surrounding obesity is actually a barrier to making long-term healthy lifestyle change.’