Spending 30 minutes less time sitting down a day may cut the risks of dying from cancer by 8% – and replacing it with a half-hour workout may reduce risks by 31%, study finds

Researchers found that replacing 30 minutes a day sitting with moving can cut the risk by nearly 10 percent.

However, spending that time by doing moderate- or high-intensity exercise can dramatically cut the risk by one-third.

The team, from MD Anderson Cancer Center in Houston, Texas, hopes the findings can help healthcare providers make exercise suggestions to patients and encourage policymakers to recommend an intermediate goal for those who are hesitant to become physically active. 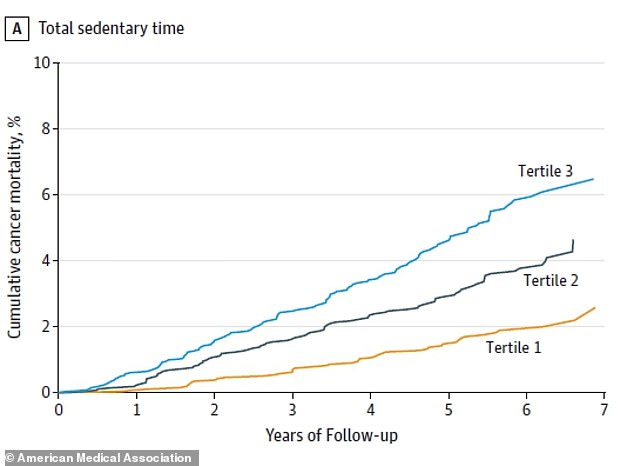 Replacing 30 minutes of sitting with light-intensity activity cut the risk of dying from cancer by 8% and with high-intensity activity by 31%. Pictured: Tertile 3 are people who spent most time being sedentary, Tertile 2 is second-most amount of time sedentary and Tertile 1 is most time active, showing that lack of movement is linked to a higher risk of death from cancer

For the study, published in JAMA Oncology, the team looked at more than 8,000 adults above age 45 enrolled in the Reasons for Geographic and Racial Differences in Stroke (REGARDS) study.

The participants had their activity levels measured by accelerometers mounted at the hip for seven consecutive days.

Data on movement was collected between May 2009 and December 2012.

The authors looked at whether there was an association between lack of movement and cancer mortality.

Participants who died had longer average sedentary times, about 14 minutes per bout compared to 11.4 mins per bout for those who didn’t.

Additionally, those who didn’t die of cancer had higher average levels of light physical activity and nearly double the amount of high-intensity activity.

Results showed that replacing 30 minutes of sitting with light-intensity activity was significantly associated with an eight percent lower risk of dying of cancer.

But spending that time working out, at either moderate or high intensity, decreases that risk by 31 percent.

There were a few other factors linked to those who died from cancer including being older, male, current smokers and suffering from coronary heart disease.

These results provide data on the benefits of more modest levels of physical activity to improve cancer outcomes,’ the researchers wrote.

‘These findings suggest that the total volume of sedentary behavior is a potential cancer mortality risk factor and support the public health message that adults should sit less and move more to promote longevity.’

Cancer is currently a leading cause of death in the US, with more than 50 percent being preventable through health lifestyle choices, according to a 2008 study.

Guidelines have recommended that people spend at least 150 minutes a week doing moderate-to-vigorous physical activity to lower their cancer risk.

However, the American Cancer Society says less than 25 percent of US adults meet the guidelines.

It comes on the heels of a new study from The Lancet which finds that nearly four million early deaths are prevented every year by people being physically active.