The measles outbreak that continues to spread across the U.S. is just one of many that are going on around the world this year.

The World Health Organization (WHO) reports that preliminary global data shows that reported cases of measles are up by 300 percent in the first three months of 2019 as compared to the same timeframe in 2018.

Countries with ongoing outbreaks include Ethiopia, Kazakhstan, Madagascar, Myanmar, Philippines, and Ukraine among others.

“Many countries are in the midst of sizeable measles outbreaks, with all regions of the world experiencing sustained rises in cases,” the organization wrote in a news release Monday, adding that many of the outbreaks have caused deaths, “mostly among young children.”

The organization noted that a number of countries that have high overall vaccination coverage — including the United States, as well as Israel, Thailand and Tunisia — are experiencing spikes in cases as the disease is spreading among clusters of unvaccinated individuals.

That is certainly the case in the U.S., with the Centers for Disease Control and Prevention (CDC) noting that the outbreaks in New York and New Jersey are attributed largely to cases among unvaccinated people in Orthodox Jewish communities.

All told, there are now 20 states where outbreaks have been confirmed, bringing the case total to 555 cases as of April 11, the CDC reports. 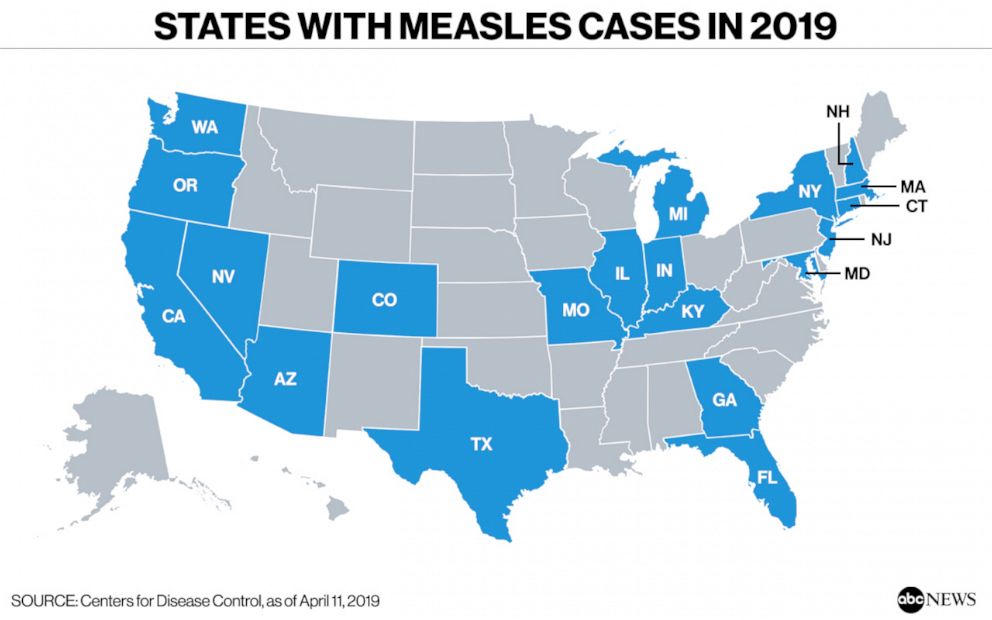 The CDC notes that the 555 cases reported so far this year is the second-highest number of cases reported in the U.S. since the disease was eliminated in 2000. The only year where there were more cases was in 2014 when there were 667 reported cases over the entire year.

The fight over vaccinations, which the global and national health communities note are necessary to help spread the potentially deadly disease, is a personal one for some.

That can be seen playing out currently in Brooklyn, New York, where five anonymous mothers are pushing back against Mayor Bill de Blasio’s emergency order calling for everyone over the age of six months to be vaccinated in certain at-risk communities.

“There’s no question that vaccines are safe, effective and life-saving,” de Blasio said in a statement when he announced the order earlier in April.