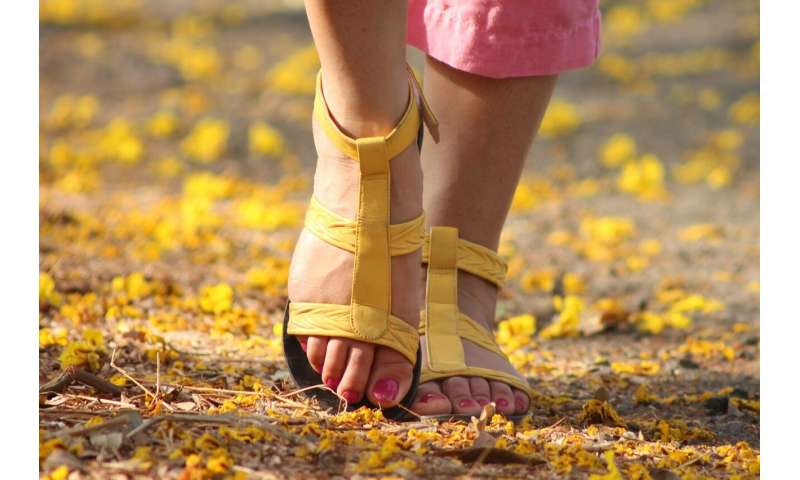 University of Queensland research shows there is more at play than just a sinking feeling when you stumble during movement or trip in a hole in the ground.

Depending on the situation, a complex system of energy absorption is taking place in either the knee, hip or ankle joints to help humans recover from an unexpected change in the height of the ground on which we move.

UQ School of Biomedical Sciences researcher Dr. Taylor Dick said studying the human response to perturbations, like falling into a hole, highlighted these mechanics in action.

“In getting from here to there, humans negotiate complex environments and unpredictable terrain,” Dr. Dick said.

“When we’re walking down the street, nowadays typically looking down at our mobile phone, we often stumble on a curb or uneven surface, yet we understand relatively little about how the human body stays upright.

“Most of what we know about human movement comes from experiments under constant speeds and terrains¬ – meaning no hills, bumps or abnormalities in the environment—but this isn’t very representative of everyday life.”

Dr. Dick and her colleagues pulled the literal rug out from under people’s feet—and measured how they respond.

They simulated the movements of falling into a hole by pulling a platform out from under the feet of subjects while they were jumping on a stationary treadmill instrumented with specialised sensors that measure the forces.

She said the experiment provided novel insights into how humans use their lower limb joints to stabilise themselves following a rapid drop in ground height.

“Humans were able to successfully recover from falling into a hole at low drop heights by increasing the energy absorbed in distal lower-limb joints such as the ankle,” she said.

“This is probably, in part, related to the behaviour of the long compliant Achilles tendon that connects our calf muscles to our heel.

“Whereas we increasingly rely on our more proximal lower-limb joints, such as the knee and the hip, to absorb energy and stabilise falls from higher drop heights—perhaps due to the larger muscles that cross these more proximal joints.

“Nevertheless, we seem to use quite different strategies when we compare how humans respond to the different drop heights”

Those using wearable assistive technology, such as prosthetics or exoskeletons, could reap the benefits of new and improved designs that can withstand complex and unpredictable environments.

“The potential impact of these sorts of wearable devices ranges from improving gait symmetry for optimal rehabilitation post-stroke to increasing the stiffness of the Achilles tendon to counteract the effects of aging, and increasing movement efficiency during load carriage in military personnel,” she said.

“By implementing wearable devices that can respond to unexpected changes in the environment, like falls, we can start to move these devices from the research environment to the real-world.”