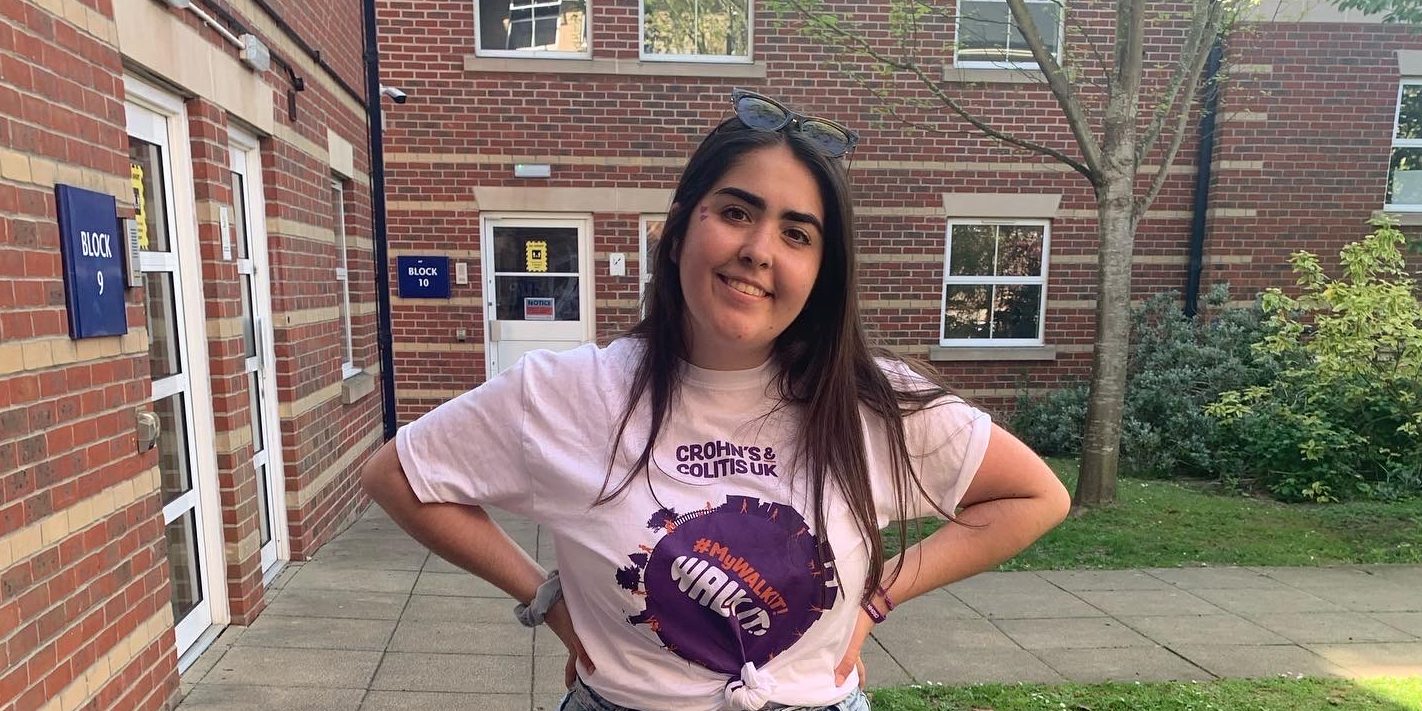 A student took two bites of her Christmas dinner, before being doubled over in pain and rushed to hospital, where she was told her organs were failing.

Now, Lucy Harman, who was diagnosed with Crohn’s disease, is helping others by sharing her story.

The 20-year-old from Chichester was in her first year of university in September 2020 when she noticed weight loss.

Afraid it was a serious illness, and desperate not to spend Christmas with her family, she kept quiet, even though she lost four stone in 30 days.

Determined to be well enough to spend Christmas with her grandparents, Lucy tried to carry on as normal.

However, on Christmas Day of that year, she was rushed to hospital and diagnosed with Crohn’s disease, a lifelong condition where parts of the digestive system become inflamed.

‘Because I left it so long, I ended up needing a feeding tube for six months to give my body a rest,’ Lucy said.

Lucy recalls not being able to keep food down as one of the first symptoms.

‘I had really bad tummy pain and blood in my stool, and the symptoms gradually got worse over time,’ she added.

Despite her worrying symptoms, Lucy did not tell anyone.

‘I think I was in denial,’ she said. ‘I told myself that it was just because I was eating badly or stressed about uni.

‘But deep down I think I was scared that it was serious, so I buried my head in the sand. I was terrified, so I ignored it and hoped it would go away.’

Another sign that something was wrong was Lucy’s dramatic drop in weight.

‘I lost about four stone in 30 days, which was obviously very drastic, but because I was away from home, my family didn’t know at first,’ she noted.

‘When I came home to Southampton for Christmas break, my mum commented that I was looking a lot skinnier. I have quite a round face but you could see my cheekbones.

‘But, as I do musical theatre, I’m training for eight to 10 hours a day, so the weight loss was easily explained by that.’

Lucy was apprehensive about going to the doctor because she wanted to spend time with her grandparents.

‘It was the year we were allowed to bubble up with another household for Christmas and the plan was to spend it with my grandparents, who I hadn’t been able to see properly in months due to the pandemic,’ she said.

‘I missed them so much and I was so focused on making sure I could see them that I didn’t want anything to ruin it.

‘My family quarantined for two weeks before Christmas so that it was safe to see my grandparents and I feared that going to the doctor, and possibly needing to go to hospital, would ruin my chances of spending the day with them.

‘Plus, I’m a self-proclaimed Christmas lover, I decorate my flat in October and have watched every Christmas movie at least 20 times each. My whole focus was on powering through to Christmas.’

Lucy’s deteriorating health came to a head on Christmas Day.

‘On the day, I saw my grandparents and it felt like a massive relief, almost like my body could give up at that point,’ she said.

‘I was very weak and as we sat down to our Christmas dinner, my body was shaking. I had about two bites of my food before I ended up sort of passing out on the sofa.

‘I told my mum that I didn’t feel well, my whole body was shaking at this point and I was rushed to hospital that evening.’

Lucy awoke in hospital on Boxing Day to be told she was suffering from severe malnutrition and dehydration.

‘It took them a long time to access my veins because they were completely shrivelled up,’ she explained.

‘Once they did eventually manage to get a look at me, they told me that my organs were going into failure because they were under so much pressure, my bowel was very close to being ruptured and my stomach wasn’t working properly.

‘My whole body had essentially given up at that point.’

Lucy spent the week between Christmas and New Year in hospital being treated with steroids and immunosuppressants.

She was then diagnosed with Crohn’s disease after an MRI scan.

‘To give my body a rest, I was given a feeding tube for around six months before I slowly built up to eating properly again,’ she said.

‘But I have to stick to plain food like rice and chicken so I don’t irritate my bowel.’

After her diagnosis, Lucy began posting videos about her journey on TikTok, where she now has over one million likes on her page and nearly 5,000 followers.

She said: ‘At first, I made story time videos about my life and health issues, then I started making comedic videos around the topic.

‘I’ve had a lot of lovely responses from people who have been dealing with similar things but one comment that stuck out to me was a guy who saw my videos and realised he had similar symptoms, so he got checked and found out he had colon cancer.

‘Luckily, because it was caught early, it was very treatable. It was amazing to hear that my videos had helped him so much.’

To help raise awareness of the condition, Lucy is working with Crohn’s & Colitis UK on their Cut the Crap campaign.

‘The campaign is all about helping people to get an early diagnosis and prevent people from being in the situation I was in,’ she added.

‘You can fill out a questionnaire about your symptoms and it will give you advice, and also email you a letter to take to your GP. This would have been useful for me because I was so terrified and I didn’t want to talk to a doctor, so having a pre-done letter would have really helped.

‘I feel very lucky to be part of this campaign and I want to do anything I can to break down the stigma surrounding bowel talk.

‘Any change in your health, if it’s your bowels or anything, you should get it checked because it’s better to be safe than sorry.

‘Crohn’s can happen at any age but an early diagnosis will help you get your life back on track.’