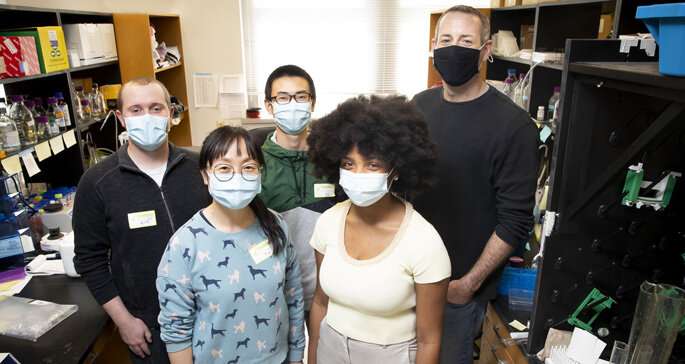 A protein implicated in neurodegenerative diseases including amyotrophic lateral sclerosis (ALS) prevents the activation of an innate immune response that leads to cell death, Vanderbilt researchers have discovered.

The protein, called TDP-43, regulates the accumulation of double-stranded RNA—genetic material found in both pathogens and in our own cells. The findings, published in the journal Cell Reports, reveal an intricate relationship between innate immune responses and control of gene expression, said John Karijolich, Ph.D., assistant professor of Pathology, Microbiology and Immunology.

Karijolich and his team are interested in how cells discriminate between self and non-self, and the signaling pathways that are activated to protect against pathogens.

“Every day, we come into contact with microbes and viruses, and we have to make sure that we don’t allow those pathogens to establish an infection,” Karijolich said.

His group has focused on the RIG-I-like receptors (RLRs), which detect double-stranded RNA and are important for responding to RNA viruses including SARS-CoV-2. Activation of RLRs triggers an antiviral response, including the production of interferon and other proinflammatory cytokines.

In previous studies, Karijolich and his colleagues made the surprising discovery that misprocessed cellular RNAs could also activate RLRs and trigger the innate immune response. The findings suggested to the team that gene expression itself, which can produce double-stranded RNA, might be “inherently dangerous,” Karijolich said.

The investigators pursued the idea that RNA-binding proteins might act as controls to prevent the accumulation of “immunostimulatory” double-stranded RNA. They identified a collection of potential regulatory proteins and focused on TDP-43 because of its connection to neurological diseases such as ALS and frontotemporal lobar dementia (FTLD).

TDP-43 is essential for cell viability (without it, cells die), and the researchers found that reducing TDP-43 levels resulted in the accumulation of double-stranded RNA, activation of RLR signaling, and robust interferon production.

Interestingly, Karijolich noted, some patients with ALS and FTLD have elevated levels of interferon in their cerebrospinal fluid, supporting a link between TDP-43, RLR pathway activation and neurological dysfunction.

“If reducing interferon is beneficial for the patients, then exploring the RLR pathway might point to novel therapeutic options,” Karijolich said.

The team will continue to examine the RLR pathway and the intriguing connection between control of gene expression and innate immune responses.