Several studies on different population groups have observed lower neutralizing potency of sera from convalescent or vaccinated individuals against the SARS-CoV-2 Omicron variant than other variants. However, there is limited knowledge on the dynamics of the neutralizing capacity of sera from the older population against the Omicron variant, despite the elevated risk of severe coronavirus disease 2019 (COVID-19). 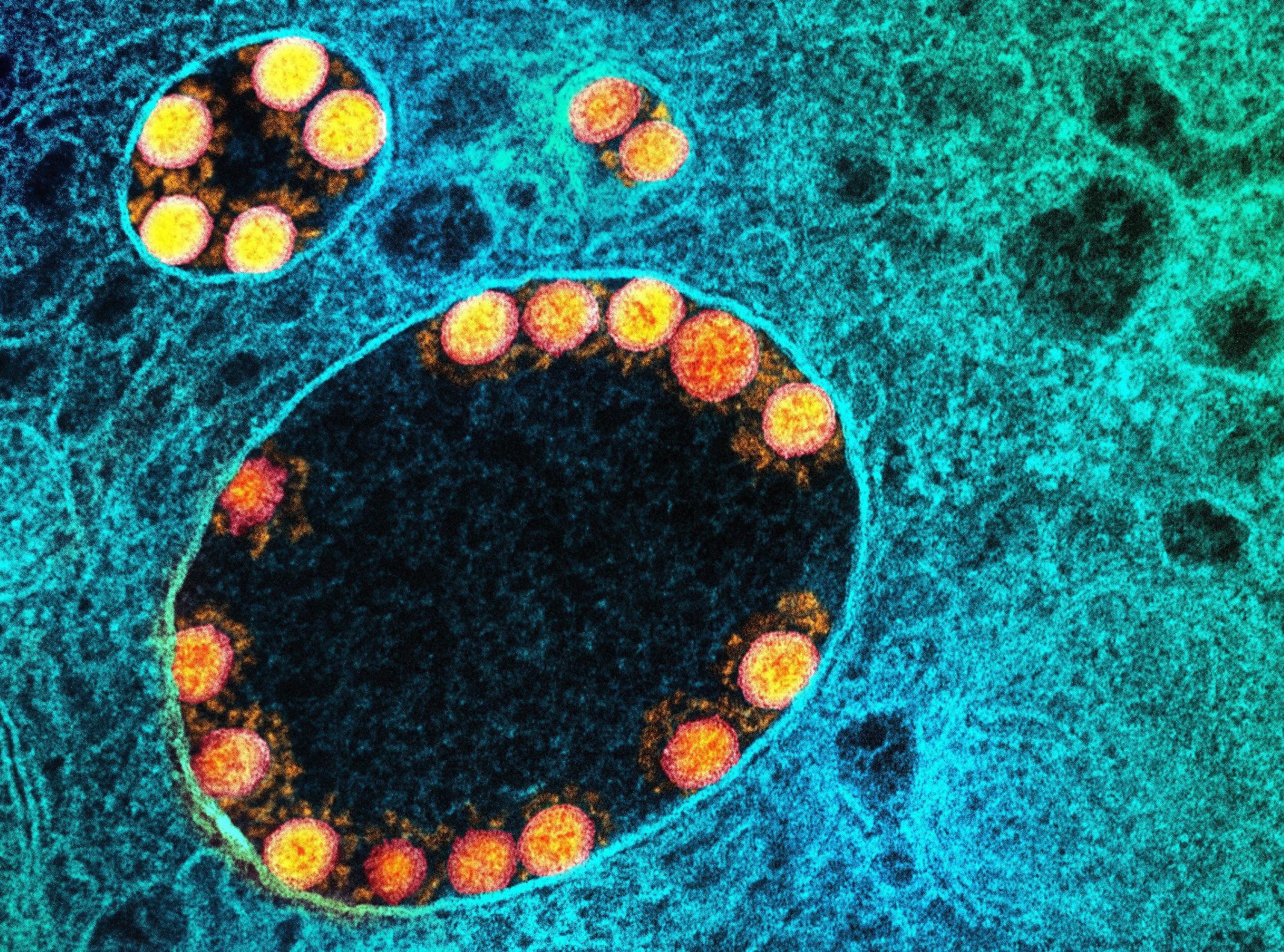 Study: SARS-CoV-2 Omicron neutralization and risk of infection among elderly after a booster dose of Pfizer vaccine. ​​​​​​​Image Credit: NIAID

In the present study, researchers assessed the ability of Pfizer’s BNT162b2 vaccine booster to elicit neutralizing antibodies (nAbs) against the SARS-CoV-2 Omicron variant. Further, they determined the humoral immunity levels before breakthrough infections with the Omicron variant. The study participants were residents of nursing homes in France. Serum samples were obtained from them around two months post-second booster vaccination. A booster dose was administered eight months post-completion of primary immunization.

Prior infection was determined using clinical data and serological assays. Anti-spike (S) antibodies were estimated using the S-flow assay and neutralizing activity against Delta and Omicron variants using the S-fuse assay. The risk of Omicron breakthrough infection during the Omicron epidemic in France between December 2021 and January 2022 was evaluated. During this period, residents of nursing homes were screened at least twice if SARS-CoV-2-positive cases were detected in any of them by reverse transcription-polymerase chain reaction (RT-PCR). A subsequent RT-PCR test was performed if samples tested positive to identify the SARS-CoV-2 variant.

The study recruited 38 older adults, with eight males and 30 females. The median age of the study population was 88 years at sampling time. Prior COVID-19 was recorded in many individuals in February and March 2020. Anti-S immunoglobulin G (IgG) levels were higher in convalescent individuals than infection-naïve subjects following the second vaccination. 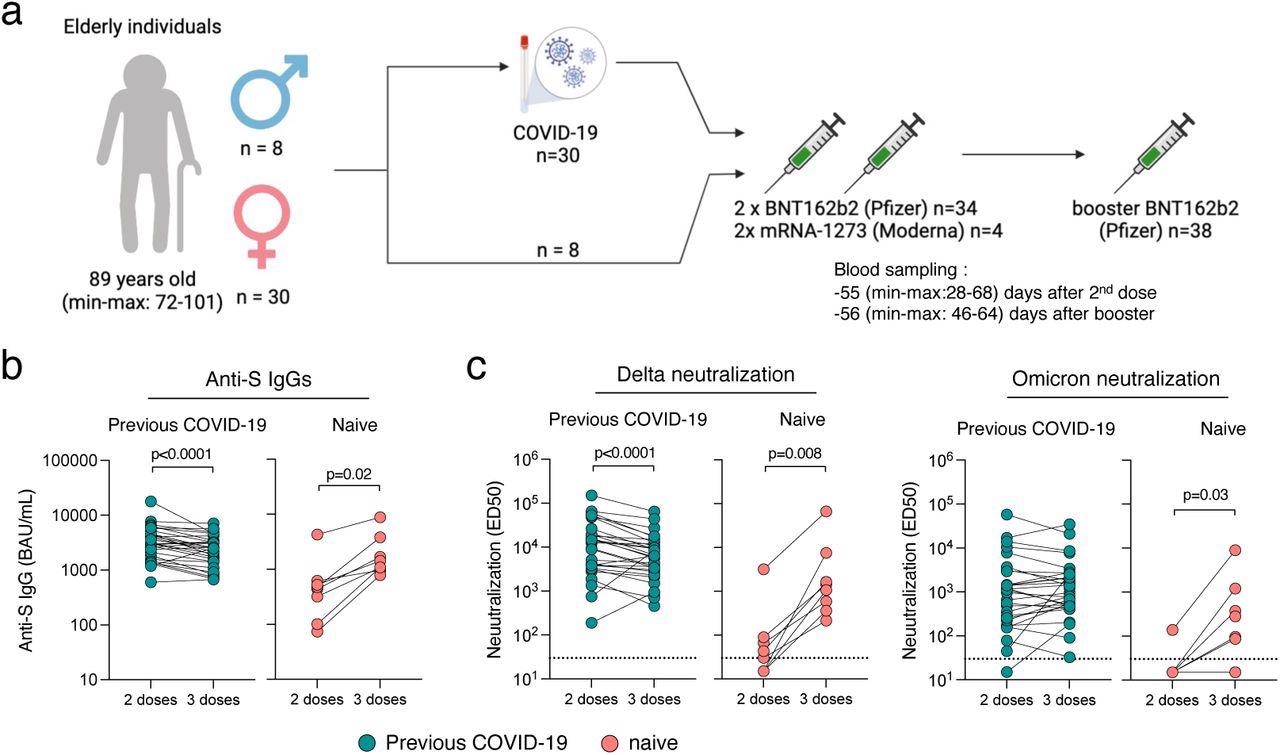 Immunogenicity of a booster dose of BNT162b2 vaccine in elderly individuals.

The post-boost antibody titers among naïve subjects were comparable to the levels of convalescent individuals after the second vaccination. The effective dilution (ED50), defined as the serum dilution at which 50% of viral infection is inhibited, against the SARS-CoV-2 Omicron variant was lower than the Delta variant. Still, the ED50 levels were higher among convalescent individuals than naïve subjects. Post-second vaccination, sera from only five of the eight infection-naïve residents neutralized the Delta variant, and only one of them neutralized the Omicron variant. After booster administration, sera from all naïve residents exhibited neutralizing activity against the Delta variant and six against the Omicron variant. All convalescent residents except one demonstrated neutralization of the two SARS-CoV-2 variants after second and third vaccine doses.

The researchers observed that anti-S IgG levels and neutralization against SARS-CoV-2 Delta and Omicron variants were lower after two vaccine doses among SARS-CoV-2-naïve subjects than convalescent individuals. Booster vaccination elevated antibody levels among naïve subjects indicating that three antigen exposures are needed to attain satisfactory nAb levels. Nonetheless, the post-boost titers were lower in naïve individuals than convalescents and insufficient to protect many of them against Omicron infections. The antibody titers were lower in those who experienced breakthrough infections than those without, irrespective of prior COVID-19 history.

The authors noted that the nAbs elicited by infection (between February and March 2020) were boosted by the primary series of vaccination a year later (in 2021), underpinning the potential of hybrid immunity. However, in the vaccinated-convalescent subjects (those with hybrid immunity), the post-boost antibody titers were marginally lower than post-primary vaccination levels. This indicated the waning of antibody levels over time and fewer antibodies in circulation before booster vaccination.

To conclude, the current study findings showed that a minimum of three exposures to SARS-CoV-2 antigens were required for achieving significant levels of nAbs against the Omicron variant. Nevertheless, protection was enhanced among previously-infected subjects indicating that a fourth exposure might further protect the vulnerable population from subsequent infection with a highly immune-evasive variant.

Tarun is a writer based in Hyderabad, India. He has a Master’s degree in Biotechnology from the University of Hyderabad and is enthusiastic about scientific research. He enjoys reading research papers and literature reviews and is passionate about writing. 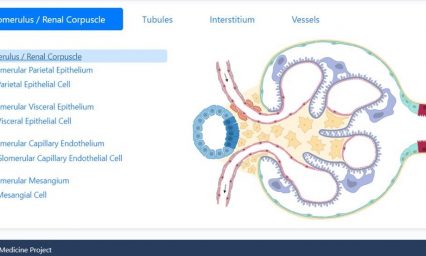 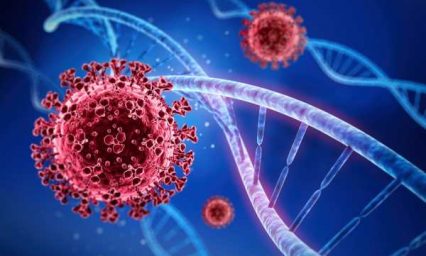 Evolution of SARS-CoV-2 genomes based on continuing positive selection