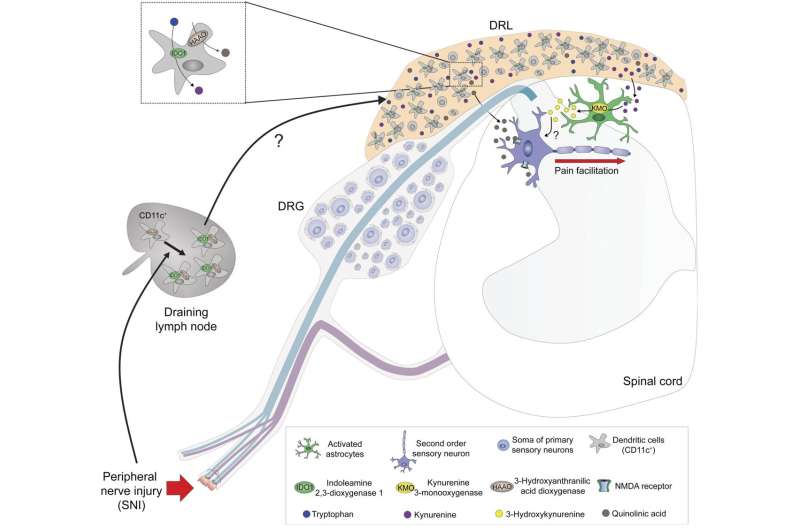 Neuropathic pain is a type of chronic pain caused by damage to the nervous system due mainly to metabolic diseases such as diabetes and arthritis, or the side effects of some kinds of chemotherapy. It is believed to affect between 3% and 15% of the population, depending on the country, but specific medications are not yet available. The drugs currently in use were originally designed for the treatment of other conditions, such as epilepsy or depression.

Now, however, after a decade of research, a group of Brazilian scientists has succeeded in describing a mechanism associated with the production of neuropathic pain, opening up a new stage of their exploration in search of drugs that can act on the metabolic pathway in question and pointing to an avenue for the development of targeted therapies.

The study revealed the role played in neuropathic pain by dendritic cells present in the meninges, the membranes that cover the central nervous system, via an increase in the metabolic kynurenine pathway.

This pathway is responsible for the amino acid metabolism essential to the production of vitamin B3 (tryptophan) and performs important functions in various physiological processes, such as immune response organization. Previous research had already detected a link between increased production of kynurenine and the development of depression and other psychiatric disorders, for example.

In this study, the scientists found that neuropathic pain was nullified when the kynurenine pathway initiated by the enzyme IDO1 (indoleamine 2,3-dioxygenase 1) was blocked pharmaceutically or genetically. An article reporting the results is published in the Journal of Clinical Investigation.

“It was a very lengthy study because we wanted to explore in depth all the mechanisms that could be involved. It required collaboration in Brazil and abroad with leading experts, such as Andrew Mellor [a professor at Augusta University, formerly Georgia Regents, in the United States], one of the world’s foremost specialists in IDO. The results we obtained offer the prospect of developing novel compounds to block this pathway. We believe inhibitors of the pathway could play a key role in controlling neuropathic pain,” Thiago Mattar Cunha, last author of the article, told Agência FAPESP.

According to Mattar Cunha, the discovery has opened up a previously unexplored field of research into the role of the meninges in the production of pain.

Previous research had already shown that the kynurenine pathway, whose formation depends on several enzymes but primarily on IDO1, is involved in pain. Because IDO1 is induced during pathological processes, especially inflammation, by pro-inflammatory cytokines, the researchers hypothesized that the neuroinflammation that causes neuropathic pain could increase IDO, raising the levels of these neurotoxic or neurostimulatory metabolites.

“We used various tools to prove and elucidate the role played by these enzymes and other products in neuropathic pain,” Mattar Cunha said. “We used mice as a model and showed that neuropathic pain decreased in animals with a deficiency of these enzymes, or with the enzymes inhibited. We then set out to understand the mechanism.”

In the article, the researchers explain that they used “a well-established model of peripheral nerve injury-induced neuropathic pain,” known as the spared nerve injury model, and activation of spinal cord microglial cells (a type of central nervous system cell involved in the immune response). In the spinal cord, kynurenine was metabolized by astrocytes, and the glutamatergic receptor was activated.

“We showed for the first time that when peripheral nerves are injured, immune cells infiltrate the meninges that protect the spinal cord and dorsal root ganglion, producing mediators which cause or maintain pain hypersensitivity. IDO1 and its metabolites are produced in this process. We showed that these metabolites come mainly from dendritic cells in the meninges, causing hypersensitivity and amplifying the glutamatergic pathway, whose receptors play an important role in chronic pain,” Mattar Cunha said.

Although the study used pain models involving physical nerve injury, he added, the mechanism is similar in other neuropathic conditions, such as infectious diseases caused by HIV and other viruses.

The researchers are now seeking partnerships with pharmaceutical companies or other centers to collaborate in studies of molecules and drugs that can target the mechanism and inhibit neuropathic pain.

An article published in Dec. 2021 Nature Neuroscience by CRID scientists, including Mattar Cunha, and researchers at Harvard University in the U.S. showed that a non-lethal component of anthrax toxin has high analgesic power and can act directly on pain-signaling neurons.

Anthrax toxin is produced by Bacillus anthracis, a bacterium whose spores can cause skin ulcers and respiratory problems leading to death in a few hours. The researchers concluded that the component binds to a receptor in pain-sensing neurons and therefore can be used as a carrier vehicle to deliver other pain-blocking substances into nerve cells.