Usually, each cell has exactly one nucleus. But the cells of our skeletal muscles are different: These long, fibrous cells have a comparatively large cytoplasm that contains hundreds of nuclei. But up to now, we have known very little about the extent to which the nuclei of a single muscle fiber differ from each other in terms of their gene activity, and what effect this has on the function of the muscle.

A team led by Professor Carmen Birchmeier, head of the research group on Developmental Biology/Signal Transduction at the Max Delbrueck Center for Molecular Medicine in the Helmholtz Association (MDC), has now unlocked some of the secrets contained in these muscle cell nuclei. As the researchers report in the journal Nature Communications, the team investigated the gene expression of cell nuclei using a still quite novel technique called single-nucleus RNA sequencing—and in the process, they came across an unexpectedly high variety of genetic activity.

“Due to the heterogeneity of its nuclei, a single muscle cell can act almost like a tissue, which consists of a variety of very different cell types,” explains Dr. Minchul Kim, a postdoctoral researcher in Birchmeier’s team and one of the two lead authors of the study. “This enables the cell to fulfill its numerous tasks, like communicating with neurons or producing certain muscle proteins.”

Kim undertook the majority of the experimental work in the study, and his data was also evaluated at the MDC. The bioinformatics analyses were performed by Dr. Altuna Akalin, head of the Bioinformatics and Omics Data Science Platform at the MDC’s Berlin Institute of Medical Systems Biology (BIMSB), and Dr. Vedran Franke, a postdoctoral fellow in Akalin’s team and the study’s co-lead author. “It was only thanks to the constant dialogue between the experiment-based and theory-based teams that we were we able to arrive at our results, which offer important insight for research into muscle diseases,” emphasizes Birchmeier. “New techniques in molecular biology such as single cell sequencing create large amounts of data. It is essential that computational labs are part of the process early on as analysis is as important as data generation,” adds Akalin.

The researchers began by studying the gene expression of several thousand nuclei from ordinary muscle fibers of mice, as well as nuclei from muscle fibers that were regenerating after an injury. The team genetically labeled the nuclei and isolated them from the cells. “We wanted to find out whether a difference in gene activity could be observed between the resting and the growing muscle,” says Birchmeier.

And they did indeed find such differences. For example, the researchers observed that the regenerating muscle contained more active genes responsible for triggering muscle growth. “What really astonished us, however, was the fact that, in both muscle fiber types, we found a huge variety of different types of nuclei, each with different patterns of gene activity,” explains Birchmeier. 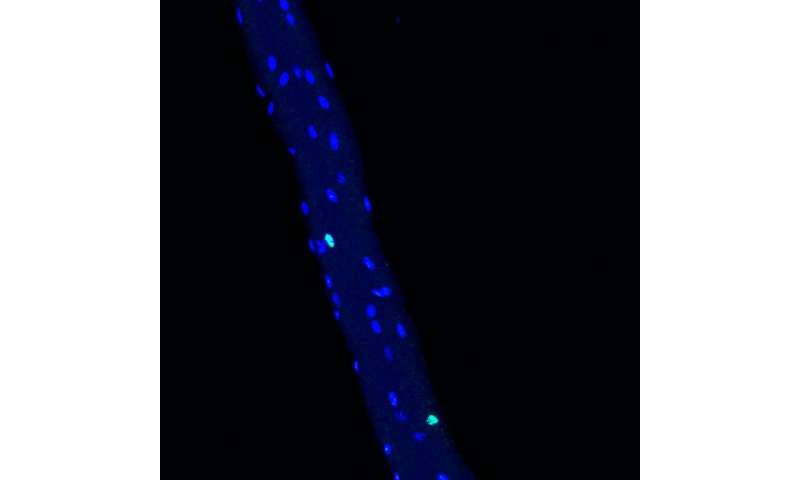 Before the study, it was already known that different genes are active in nuclei located in the vicinity of a site of neuronal innervation than in the other nuclei. “However, we have now discovered many new types of specialized nuclei, all of which have very specific gene expression patterns,” says Kim. Some of these nuclei are located in clusters close to other cells adjacent to the muscle fiber: for example, cells of the tendon or perimysium—a connective tissue sheath that surrounds a bundle of muscle fibers.

“Other specialized nuclei seem to control local metabolism or protein synthesis and are distributed throughout the muscle fiber,” Kim explains. However, it is not yet clear what exactly the active genes in the nuclei do: “We have come across hundreds of genes in previously unknown small groups of nuclei in the muscle fiber that appear to be activated,” reports Birchmeier.

Muscle dystrophy seemingly causes many nuclei types to be lost

In a next step, the team studied the muscle fiber nuclei of mice with Duchenne muscular dystrophy. This disease is the most common form of hereditary muscular dystrophy (muscle wasting) in humans. It is caused by a mutation on the X chromosome, which is why it mainly affects boys. Patients with this disease lack the protein dystrophin, which stabilizes the muscle fibers. This results in the cells gradually dying off.

“In this mouse model, we observed the loss of many types of cell nuclei in the muscle fibers,” reports Birchmeier. Other types were no longer organized into clusters, as the team had previously observed, but scattered throughout the cell. “I couldn’t believe this when I first saw it,” she recounts. “I asked my team to repeat the single-nucleus sequencing immediately before we investigated the finding any further.” But the results remained the same.

The mouse nuclei resemble those of human patients

“We also found some disease-specific nuclear subtypes,” reports Birchmeier. Some of these are nuclei that only transcribe genes to a small extent and are in the process of dying off. Others are nuclei that contain genes that actively repair damaged myofibers. “Interestingly, we also observed this increase in gene activity in muscle biopsies of patients with muscle diseases provided by Professor Simone Spuler’s Myology Lab at the MDC,” says Birchmeier. “It seems this is how the muscle tries to counteract the disease-related damage.”