Patients with stage II pancreatic cancer who are treated with chemotherapy followed by resection (an operation that removes the cancerous part of the organ, structure or tissue) live nearly twice as long as patients who receive only chemotherapy, according to a new Journal of the American College of Surgeons study published online in advance of print.

In stage II patients, there is a chance that pancreatic cancer can be removed by resection even after it has spread close to blood vessels. Although chemotherapy can improve outcomes, the risk of surgery is justified because the patients live longer even if the cancerous tissue is not entirely removed, according to the study from researchers at the University of Arizona Department of Surgery, Tucson.

“Our results show that surgery is viable in more cases than we thought,” said Amanda K. Arrington, MD, MHM, FACS, a surgical oncologist at the University of Arizona Department of Surgery, Tucson.

Pancreatic cancer is the fourth leading cause of cancer deaths in men and women in the U.S. Survival rates for pancreatic cancer are low because it is a fairly aggressive, fast-growing cancer, Dr. Arrington said. Approximately 10 to 30 percent of these patients present with disease in which resection may be considered an appropriate therapy. Chemotherapy can improve the chances for successful surgery, as about one in three borderline cases are resectable following chemotherapy. Even after surgery, however, it is common for pancreatic cancer to return.

While the goal of resection is to remove all of the tumor tissue, it can be difficult to accomplish, especially if the cancer has spread to nearby blood vessels that feed the liver and small intestine. Margin status, or how much cancerous tissue is left post-surgery on the edges of the resected area, is a significant predictor of survival after surgery for pancreatic cancer. Patients with no cancerous tissue left after resection (R0) have improved survival compared with patients with microscopic amounts (R1) or macroscopic amounts (R2) of cancerous tissue left after resection. This study looked at R1 and R2 resection outcomes compared with chemotherapy alone.

The data was analyzed in multiple ways to address potential bias; all analyses of the data delivered the same findings. 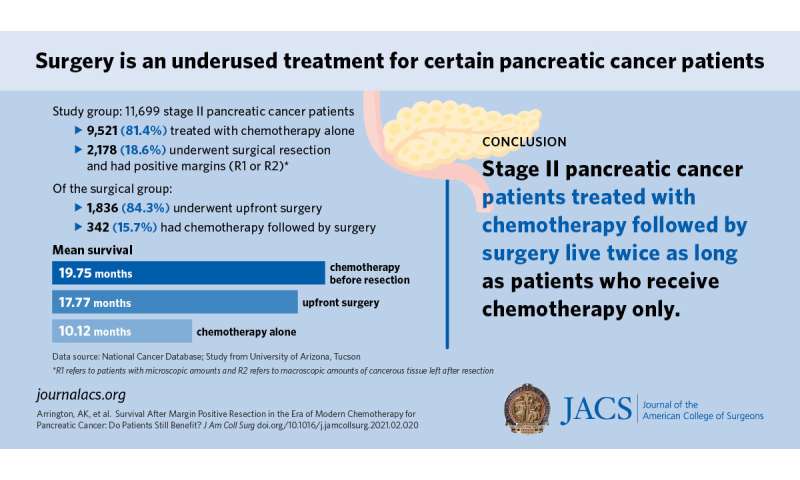 Study results confirm current recommendations for stage II pancreatic cancer, which note that survival improves when patients receive multimodality therapy, chemotherapy before and/or after resection. Further, patients benefit from surgery even in extremely difficult cases that end up with a margin positive resection, Dr. Arrington said. The researchers found even when the tumor does not shrink significantly in response to chemotherapy, there are still survival benefits to taking an aggressive surgical approach.