Surgery kills more than HIV, TB and malaria COMBINED: Operations are the ‘neglected stepchild of global health’ after too much money has been pumped into infectious diseases

An analysis of data from 29 countries by the University of Birmingham revealed a staggering 1.23million more die after going under the knife than from HIV, TB and malaria combined.

Overall, 7.7 per cent of all fatalities worldwide occur within 30 days of the deceased going under the knife – with only heart disease and stroke being bigger killers.

‘Postoperative complications’ – such as bleeding and infections – are thought to be behind most of these deaths.

The researchers claim surgery is the ‘neglected stepchild of global health’ after too much money has been pumped into treating infectious diseases. 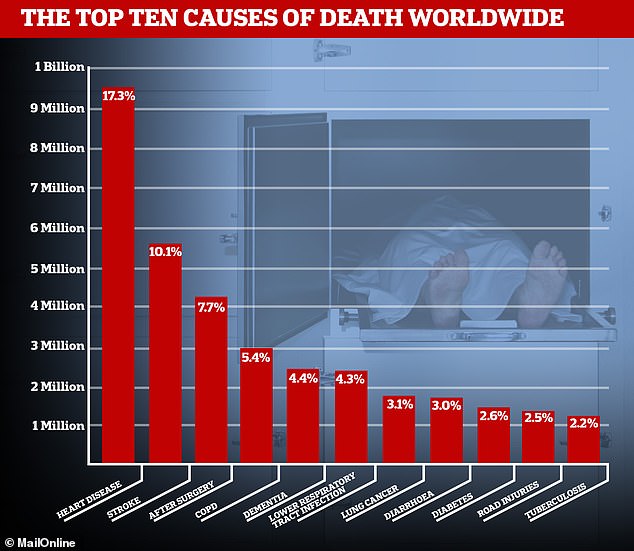 A study found deaths that occur within 30 days of surgery make up 7.7 per cent of all fatalities every year worldwide. This suggests that going under the knife is the third biggest cause of death, with only heart disease and stroke being bigger killers. HIV is not even in the top ten

The research was carried out by the University of Birmingham and led by Dr Dmitri Nepogodiev, from the department of public health and surgery.

‘Surgery has been the “neglected stepchild” of global health and has received a fraction of the investment put in to treating infectious diseases such as malaria,’ Dr Nepogodiev said.

‘Although not all postoperative deaths are avoidable, many can be prevented by increasing investment in research, staff training, equipment, and better hospital facilities.’

To determine the quality of surgeries carried out all over the world, the researchers analysed the available data on the number of fatalities that occur after people going under the knife.

Information on surgery prevalence and post-operation death rates was only available for 29 countries. This data was then extrapolated to cover the rest of the world by looking at their mortality statistics and incomes.

Results – published in a research letter to The Lancet – revealed 2.97million people die every year as a result of HIV, TB or malaria.

TB is the tenth most common cause of global deaths and is responsible for 2.2 per cent of fatalities every year. HIV and malaria are not in the top ten.

A new robot with flexible joints like a human will be used by the NHS to operate on patients.

Known as Versius, it is a third of the size of robots already used by hospitals, such as the da Vinci Xi system.

Experts say this should allow the gadget to perform a wider range of delicate procedures via keyhole surgery, such as hernia repairs.

Each of the robot’s four arms has fully-rotating wrists – controlled by a surgeon sitting at a console with two video game-like joysticks and a 3D screen.

This gives surgeons increased dexterity and a magnified view, which is thought to reduce pain and boost recovery times among patients.

A spokesperson from Versius’ manufacturer CMR Surgical, told MailOnline: ‘Versius mimics the dexterity and range of movement in the surgeon’s own hand and wrist.

‘And is designed to be flexible enough to handle the majority of laparoscopic abdominal and pelvic surgical procedures.’

Coronary heart disease – when the organ’s blood supply is blocked due to plaque in the arteries – is the biggest killer and makes up 17.3 per cent of all deaths every year.

This is followed by stroke – at 10.1 per cent of deaths – and then surgery.

Of the 4.2million who pass away following surgery, half occur in low or middle-income countries.

And people living in these nations are often forced to go without much-needed surgery.

The researchers estimate 4.8billion people around the world lack access to safe and affordable operations.

In these poor regions, 143million procedures are not being carried out every year despite patients being in critical need.

If these operations were performed, the annual death toll after surgery would increase further to 6.1million, the researchers claim.

The study did not look at the cause of these surgery-releated fatalities.

However, the authors wrote many occur ‘as a result of postoperative complications’.

Some deaths may also be due to the operation failing to relieve the disease it was intended to treat.

‘To avoid millions more people dying after surgery, planned expansion of access to surgery must be complemented by investment in to improving the quality of surgery around the world,’ Dr Nepogodiev said.

Study author Professor Dion Morton – chair of surgery at the University of Birmingham – adds that as access to operations improves, so to must the safety of these procedures.

‘Surgery saves lives and can transform patients’ quality of life, but this study shows that a large number of patients die in the immediate postoperative period,’ he said.

‘As efforts continue to increase access to surgery around the world, there is also an urgent need for research to improve the quality and safety of surgery.’