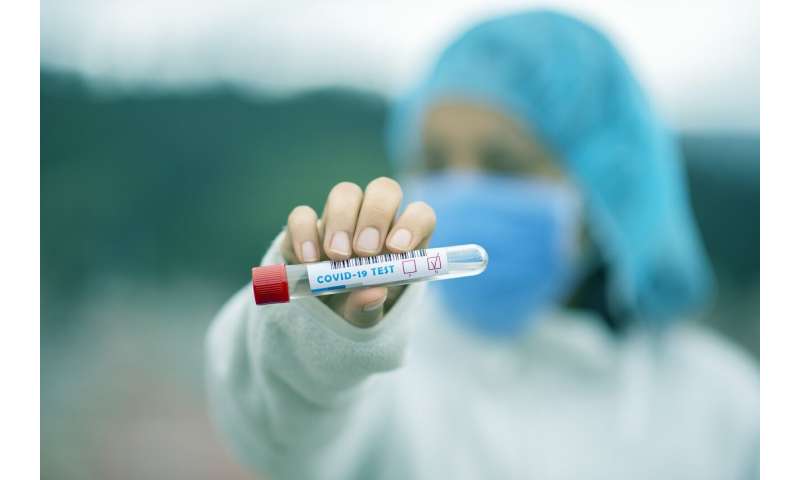 One morning, Amy Rosen woke up with body aches and a throbbing head. When she couldn’t shake the feeling, she went to urgent care to get swabbed for COVID-19 and paid $45 to get quick results. Two days later, her test result came back positive.

In the next two weeks, Rosen got nasal and saliva tests another six times at drive-thrus, walk-ups and again at urgent care—all in a quest for a negative result to resume her normal life.

As the virus infects Floridians at a record pace, wait times at test sites and long turnarounds for results have people like Rosen taking multiple tests at multiple sites. Desperate for an accurate diagnosis, they strategize, and even pay, to get faster test results.

“You really can’t wait for results to get tested again,” Rosen said, a Plantation mother of two teenagers. “A positive is kind of a stigma. You need those negatives for validation, to prove you are OK to be out and about.”

By now, testing is easy to access in South Florida, and for the most part, it is free. There are mobile units and walk-up clinics, government-run drive-thrus and pop-ups in parking lots. Many testing sites are appointment-only and booked days or weeks into the future. Some walk-ups have lines that wrap around the building or loop through the parking lot.

Getting swabbed is the first step. After the specimen collection, another waiting game begins with some backlogged labs taking as many as 10 to 12 days to deliver results. And, in all the chaos, people with time, money or both are navigating where and when to go, and how to get results quickly.

Motivation varies: Sometimes a Floridian feels achy or has a cough and wants to know if they have the virus. Sometimes a curious test taker wants to know if he or she has the virus without symptoms. Then there are people who lack trust in a result. In other instances, someone previously positive is seeking a negative result—or two of them—to go back to work or emerge from self-isolation.

Tomasina Baker’s motivation is paying her bills. A worker at a long-term care facility from Hollywood, Baker swabbed her mouth during her shift and learned she was positive. “I had no symptoms so I didn’t really trust the results,” she said. To be able to resume her weekend shifts, Baker needed two negative test results, her employer told her.

Baker’s game plan: Pay a co-pay for an ER visit and get a quick result from Memorial Hospital. That resulted in a negative in 48 hours. A few days later, she woke up at 5 a.m. and went to a free walk-up in Miramar and waited in line. A week later she had a second negative. Now, she will take another test at her workplace to be extra cautious.

“I think everyone should be tested frequently because the virus is still out there,” she said.

In large part, the testing madness has been driven by wait times. As demand for COVID-19 tests continues to rise in hard-hit Florida, the wait times for test results has grown longer, which has led to desperation and a scramble for shortcuts.

Jeff Berke of Fort Lauderdale is on that quest, motivated by his desire to be around family. Initially, Berke drove to Holiday Park in Fort Lauderdale to get tested out of curiosity. Five days later he received a text message saying he was positive. After a week, he returned to Holiday Park, but a new company had taken over the process and handed him an oral swab to do himself in his car. “With oral testing, I have heard stories of it not being accurate,” he said. So to better learn his true status, he went the next day to CVS for another test, a self-administered nasal swab. “This one would be with Quest and they told me I would have to wait 7 to 10 days.”

Berke said he’s not sure whether he’s done with testing. “I really want to make sure I get two negative tests. My mom is 86 years old and my brother in law has a compromised immune system. I need to know it’s OK to be around them.”

In South Florida, community spread has taken hold and many national labs processing hundreds of thousands of tests a day are struggling to keep up with the increased demand for coronavirus tests—from Florida and other states.

When seeking testing, Michael Rosen realized the lab is more important than the test site. Rosen waited 12 days to get a negative test result from a Coral Springs walk-up site that used Quest Laboratories to process the swabs. Then, he used a strategy.

Because his co-worker tested positive, he wanted another test, but he also wanted faster results. So he searched for smaller sites that use smaller labs that advertised shorter wait times. He has taken two tests in city parks that use Real Diagnostics to process results. Each time he waited less than an hour to get swabbed and received results in four days—both positive. He just took another test in a city park that uses the same lab, eager to end his three weeks of self-isolation at home. “I’m really hoping this last test is negative. A lot of people don’t want to be around you unless you are negative.”

Other South Floridians learned of a different shortcut. But by paying cash at a private lab, results come back faster. Mike Ross said his Miami lab processes thousands of specimens a day for private businesses, community organizations and individuals. He understands why people seek options to cut their wait times. “People want peace of mind or they don’t want to wait in line and they are willing to pay for that,” Ross said.

Lab24 has a swab site in Boca Raton and one in Miami where people can walk up, pay cash ($150 to $180) and get results in 24 hours. Private insurance will cover the cost if someone has symptoms, he said. Ross sees no downside in testing multiple times. “It’s a complex test. Our scientists have to manually read each report to ensure accuracy.”

Ross said Lab24 checks for multiple markers, which means it picks up positives more often than some other labs. “We sometimes have the same person showing up multiple times. We have a hard time saying no.”

Some South Florida employers have hired private labs to test all their workers, picking up the expense for fast results. When workers come back positive, the serial testing begins.

One HR manager has discovered: “Some employees are so anxious to get cleared before their paid leave expires that they get tested multiple times, going to private labs, drive-thrus or their doctor’s office, and they don’t always wait for the result of the first before getting another test in their efforts to get a negative result. But we have stopped asking for negative results because we knew this was going on, and now we are following the new CDC guidelines.”

The rules have changed

On July 22, the Centers for Disease Control and Prevention (CDC) updated its guidelines for when someone can stop isolating at home and return to work. Rather than requiring two negative tests 24 hours apart to return to work, someone can go back after 20 days have passed since the first symptom, or 10 days after the first positive test for those without symptoms. And, 24 hours must pass since someone’s last fever.

“The government is trying to come up with science-based guidance to relieve the pressure to get repeated testing,” said Terry Adirim, Senior Associate Dean for Clinical Affairs at Florida Atlantic University.

Meanwhile, test site directors say be aware while test shopping that the most accurate test to learn if you are infected is the PCR diagnostic test used at most government-run sites. An antibody test offers quick results but only shows past exposure to the virus.

“You can go to Hard Rock today, Tamiami on Thursday and Marlins Park on Friday. It’s not like we have an electronic medical record,” said Eneida Roldan, clinical director of the FIU/Youth Fairgrounds testing site. “But different tests use different platforms … it’s important that you understand the result you are getting.”

Some health officials have said the more people are tested who don’t need to be, the harder it is for people who need to get results back.

Dr. Jennifer Goldman, chief of primary care for Memorial Healthcare System and medical director of the CB Smith Park community COVID-19 test site, said, “If someone thinks they have been exposed to someone positive and wants to get tested, they should do so.”

But if you get tested, behave like you are positive and quarantine at home until you get the result, Goldman said.

“One of the things we do see is people are focused on getting tested multiple times, but while waiting for results they are going into the community, not knowing if they are positive for coronavirus,” Goldman said.

But because of the demand, long lab processing time has become a national problem, he said. “We want to make sure people who are 65 and older, first responders and people who have been exposed or have symptoms get their results as quickly as possible.”

To address on-site wait times, Moskowitz said the state has opened designated lanes at eight sites for people who have symptoms to self swab. In addition, the state is pivoting from using national laboratories to process tests to three smaller companies that promise results in 72 hours. It will soon open sites offering antigen tests that produce results in 15 minutes. While faster, that type of test is slightly less accurate than the more common diagnostic tests.