Australia’s COVID-19 vaccination rollout has hit yet another crossroads. Public confidence has wavered following the federal government’s announcement last week that the Pfizer vaccine was the preferred choice for people under age 50.

The advice was based on an extremely low risk of severe blood clots forming in younger recipients of the AstraZeneca vaccine. Many patients under 50 have since canceled or been turned away from their vaccine appointments, according to reports.

According to our analysis, the biggest drop in COVID-19 vaccine acceptance rates in Australia happened when blood clotting incidents were reported in some European countries, prompting rollouts to be stopped.

Our team trawled through social media feeds for two months, collecting data on public attitudes towards the vaccine. We also watched these opinions change and evolve in response to important media announcements.

We found the Australian public cares about the vaccine’s effectiveness, side effects and roll-out process. Social media sentiment in particular is helping us identify misinformation in a way more traditional survey methods can’t.

Our findings, which have been provided to Queensland Health, are aiding decision makers in devising the best strategies to provide vaccine information to the public.

Carrying out surveys can be costly and time-consuming. It’s hard to get large samples because many people approached won’t participate. It’s also difficult to return to respondents later to understand how their beliefs may be changing over time.

Between October last year and February this year, the Gold Coast Public Health Unit ran a survey asking people if they intended to get the COVID-19 vaccine.

Almost 19,000 survey invitations were given to people who visited fever clinics at the Gold Coast University Hospital and Robina Health Precinct. From these, 2,706 responses came back.

Results showed just over 50% of respondents “definitely intended” to receive the COVID-19 vaccine. Around 15% said they “probably” or “definitely” wouldn’t receive the vaccine.

Similarly, a study conducted by researchers at the Australian National University showed one in five (21.7%) respondents would “probably” not or “definitely” not receive a vaccine.

While such surveys provide a snapshot from one point in time, big data analytics can examine social media data (such as from Twitter) in real time and provide ongoing insight.

We applied algorithms to social media content published between January 24 and March 24. In just two months, more than 97,000 Twitter posts from more than 42,000 Australian accounts (with 308,331 “likes”) were collected.

These posts attracted a further 49,642 comments from another 15,648 unique accounts. This sample size is much bigger than the surveys mentioned above. Notably, the data we collected showed us how vaccine hesitancy had changed during that time.

We used techniques called “sentiment polarity” calculations and “topic modeling analysis” and also looked at the number of likes received by posts for and against the vaccine.

During the two months, we were able to identify links between changes in sentiment and specific media announcements from trusted news sources. The announcements had an obvious impact on people’s opinions. 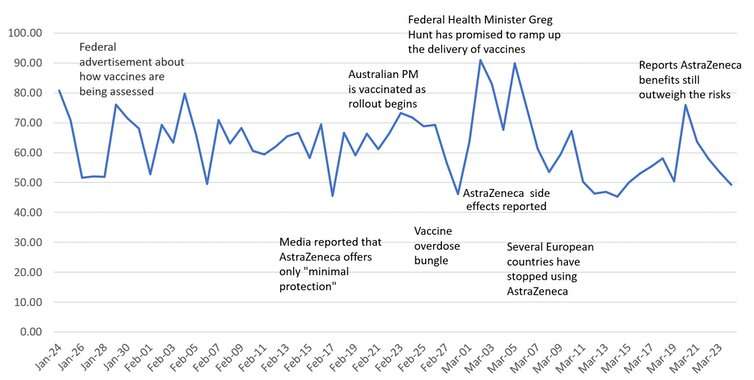 Negative reporting had a direct impact

Vaccine support started at around 80% in January. We then saw declining support as COVID cases in Australia dropped. But when the media showed people receiving the Pfizer vaccine in February, support grew again.

We then received reports of multiple European Union countries banning the AstraZeneca COVID-19 vaccine, due to concerns of blood clotting as a potential side effect. This marked the biggest drop in support, from more than 80% to below 60%.

In late March, support bounced back when the same countries resumed rolling out the AstraZeneca vaccine, and news emerged that GP clinics in Australia were gearing up to do the same.

There are some limitations to our research method. For instance, the views of Twitter users don’t necessarily represent the general population. That said, our data pool does seem to reflect a fairly diverse group of users sharing opinions by posting, re-tweeting and liking posts.

All of these opinions are captured and incorporated into our analysis. Considering the large volume of data used, as well as insights from other correct predictions, we are confident in our ability to provide an accurate near real-time analysis.

Addressing what the public wants addressed

Big data analysis can deliver fast results that show not just the prevalence of vaccine hesitancy, but also help us understand the factors that drive it.

Further, by focusing on the regions or demographics which have the most doubts—whether this is certain age groups, or people with a given level of education—big data analysis can keep high-level decision makers informed about how the public feels.