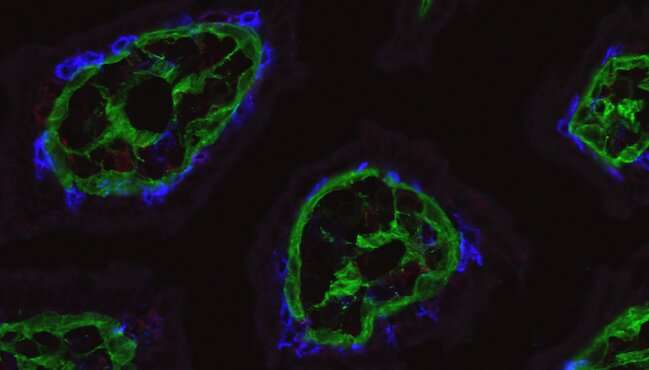 Cells in the gut send secret messages to the immune system. Thanks to new research from the La Jolla Institute for Immunology (LJI), scientists finally got a look at what they’re saying.

A new study in Science Immunology reveals how the barrier cells that line the intestines send messages to the patrolling T cells that reside there. These cells communicate by expressing a protein called HVEM, which prompts T cells to survive longer and move more to stop potential infections.

Barrier cells called epithelial cells form a one-cell thick layer that lines the gut, lined up like a busy queue outside a nightclub. The epithelial cells squish together, jostle each other and chat. Meanwhile, T cell security guards circulate around the line, looking up and down the block for signs of trouble. “These T cells move around the epithelial cells as if they are truly patrolling,” says Kronenberg.

But what keeps these T cells in the epithelium on the job?

“We’ve got some insight on what gets T cells to the gut, but we need to understand what keeps them there,” says Kronenberg. In fact, a lot of immune cells reside long-term in specific tissues. By understanding the signals that keep T cells in certain tissues, Kronenberg hopes to shed light on conditions like inflammatory bowel disease, where far too many inflammatory T cells gather in the bowel.

Using a mouse model, the researchers then showed that removing HVEM expression only in the gut epithelial cells was a major blow to gut health. Patrolling T cells could not survive as well and they didn’t move as much. These T cells made lousy security guards. When challenged with Salmonella typhimurium, an invasive bacterium that causes gastroenteritis, the T cells allowed the infection to take over the intestines and spread to the liver and spleen. Therefore, HVEM from epithelial cells laid the groundwork for T cells to guard the gut—it was the very reason they survived in the epithelium—communicating with the T cells indirectly through the basement membrane.

These insights came from a series of experiments spearheaded by study first authors Goo-Young Seo, Ph.D., Instructor at LJI, and Daisuke Takahashi, Ph.D., formerly of LJI and now at Keio University in Tokyo. The team worked closely with the laboratory of LJI Professor Hilde Cheroutre, Ph.D., the LJI Microscopy Core, the LJI Flow Cytometry Core, and employed intra-vital imaging RNA sequencing techniques to investigate HVEM’s role in the gut.