Weddings are stressful AF. These elaborate, expensive events take months — if not years — to orchestrate, so it’s easy to see why brides and grooms want everything to go according to plan on their big day. But wedding-related anxiety is no excuse for shaming a guest into toning down their presentation, especially if said guest identifies as LGBTQ+.

Unfortunately, one Redditor had to learn this lesson the hard way. User @NonLocalityp took to the famed /AmITheAsshole Subreddit for some clarity on a sticky situation involving him, his fiancée, and his male BFF, Taylor.

“Me (31M) and Taylor (30M) have been best friends since forever,” he wrote. “We were school buddies, college friends, my parents love him, we’ve vacationed together many times. Taylor is a very affectionate person, kind, thoughtful guy.”

@NonLocalityp is engaged-to-be married to a “brilliant woman” named Anne, which isn’t the problem here. What is the issue is how he handled a questionable request from Anne, whose “anxiety and ADHD” is apparently dictating their approach to wedding planning.

“After a long and thoughtful conversation, my fiancée voiced her concerns about inviting Taylor to our wedding,” he recalled. “Basically, she had two main reasons for asking him that: 1. Dress Code: Taylor is a 30-year-old punk. He wore a dress to our prom. You know, that kind of guy. 2. Taylor is dating a guy. Which is NOT the problem. But his partner is also very flamboyant. Anne wants a very minimalist, quiet, calm, wedding… so, that was her request.” Um…! First red flag. 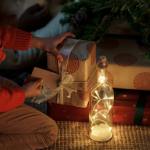 “I talked to Taylor the next day. … [He] said, ‘Do you think I’m gonna show up in a white dress?” and [laughed] about it, but I told him he needed to promise he would respect the dress code,” @NonLocalityp said. “Black tuxedo for the guys… that was the code. I got a little caught in the moment, so maybe I was harsher than I should’ve been. I told him to ‘man up’ and to ‘act his age’. I said some stupid stuff like ‘People laugh about you, you want to be a joke?’”

Biiig yikes. Even though @NonLocalityp claims Taylor’s queerness “is NOT the problem,” how he expresses it clearly is. It’s one thing to ask a guest not to upstage the bride on her wedding day; it’s another thing entirely to tell a queer person he needs to “man up” because of his self-expression. Coming from your BFF, that must be especially devastating to hear.

After the confrontation, Taylor ended up declining the wedding invitation. Honestly, I can’t blame him!

“[Taylor] keeps telling me ‘we’re good’ and everything is okay, but the situation [is] bothering me,” @NonLocalityp concluded. “I love Tay, but I know he can be difficult. My group chat with my family is burning because they don’t understand why he will not be there, and our friends’ group chat is dead since the news dropped. AITA?”

According to Redditors in the comments, @NonLocalityp is absolutely in the wrong here… and has some toxic masculinity hang-ups to work through.

“YTA,” one user opined. “This could have been a really easy, ‘Hey, it’s important to my fiancée that everyone respects the dress code.’ Telling him to ‘man up,’ ‘act his age,’ ‘people laugh about you’ is beyond rude and mean. It’s cruel. If I was Taylor, I wouldn’t attend your wedding either.”

“Let’s be real here,” someone else wrote. “You chose to say ‘man up’ because he wears dresses, and you think that makes him less of a man.”

“[Your fiancée] is an AH for being so intolerant of your friend,” another Redditor added. “YTA for not standing up for him, and double for insulting him yourself.”

Before you go, check out the mental health apps we swear by: