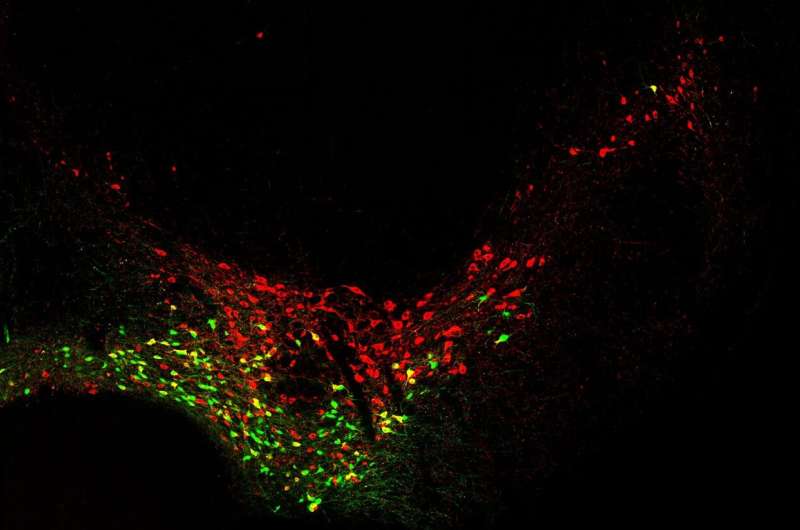 When it comes to royalty, things are clear: The monarch’s first child inherits the crown. Siblings born later must make do with a less glamorous profession. This is quite similar for some nerve cells in the brain. In their case, it is not the order in which they are born, but at least the time of their emergence that determines their further career. This is shown by a recent study by the University of Bonn. The results were obtained in mice; the extent to which they can be transferred to humans is therefore still uncertain. They have now been published in the journal eNeuro.

In their study, the researchers examined a specific type of cell: the dopaminergic neurons in the midbrain. They owe their somewhat unwieldy name to their ability to produce dopamine. This messenger substance plays an essential role in signal transmission between certain nerve cells. The loss of dopaminergic neurons can therefore lead to Parkinson’s disease, for example, with its characteristic deficits in movement sequences.

The dopaminergic neurons in the midbrain are not all the same. “We now know a whole range of different types, all of which very likely perform specific tasks in the brain,” explains Prof. Dr. Sandra Blaess of the Institute for Reconstructive Neurobiology at the University Hospital Bonn. “They send very long nerve fibers, called axons, to different areas of the brain. One of the things they transport via these fibers to the respective target region is dopamine.” Nevertheless, most of these types probably originate from the same progenitor cells. “We wanted to know how these progenitors develop into the different groups of dopaminergic cells without which the brain would not function.”

It has been known for some time that the career of other nerve cells depends on the time of their emergence. “We investigated whether this is also the case in dopaminergic neurons,” says Alessandro Petese, who is doing his doctorate in Prof. Blaess’ group. “In mice, it takes four to five days for all the progenitor cells to convert to dopaminergic neurons. We wanted to know: Are the neurons that form on day one different from those that form on day two, three, or four?”

To do this, the researchers labeled the precursor cells at different times so that all neurons that emerged from these precursors in the following days lit up green under the microscope. In contrast, those neurons that had previously emerged from unlabeled precursors remained dark. “In this way, we found that cells born early can still develop into all types of dopaminergic neurons in the midbrain,” says Blaess’ collaborator, Franca Fries. Figuratively speaking, these cells can therefore still follow very different career paths. “However, the later they are born, the more their options narrow. So they become more specialized.”

Basic research with relevance for practice

The research group now wants to investigate which signals force the progenitor cells increasingly in a certain direction. “In reconstructive neurobiology, efforts are now being made to create neurons from stem cells,” says Blaess, who is also a member of the Transdisciplinary Research Area “Life and Health” at the University of Bonn. “This is because it allows for targeted reproduction of nerve cell types in the laboratory, which could potentially be used to reverse the loss of cells that occurs in Parkinson’s disease, for example.” To do this, it is important to understand the processes that take place during natural differentiation.