A new wearable patch can monitor your health through your sweat.

Fitness and health trackers are everywhere, but most of them are limited to collecting data on your heartbeat, how much your moving and information you manually input to their paired apps.

That’s helpful if you’re trying to get in shape, but for people suffering from chronic conditions and diseases – like kidney disease or cystic fibrosis – more exact and frequent analyses could alert them to life-endangering changes.

Scientists at Northwestern University have developed a soft patch sensor that has tiny holes for bead of sweat to flow into.

The patch is essentially a self-contained lab that tests the sweat’s pH, lactate and blood sugar levels and wirelessly send the results to a smart phone. 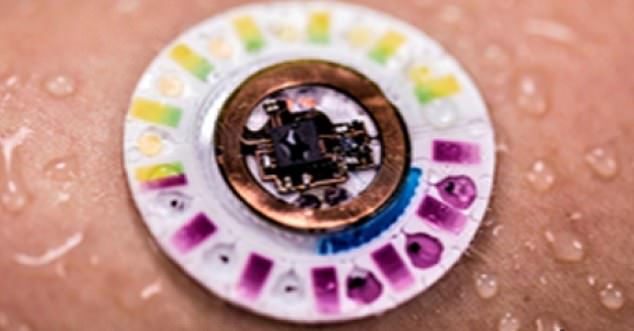 The new skin patch is about the size of a dollar coin and harmlessly collects sweat beads and ‘tests’ them for pH, glucose, lactate and chloride levels

Wearables that double as fashion accessories are already on the wrists of many and tracking apps are on the phones of many more.

But some scientists are trying to more closely integrate these devices with our bodies and make them smaller in order to allow for more constant tracking and more comprehensive analyses of our health.

Already, one pill for depression and schizophrenia that contains a sensor is on the market, and ‘smart’ tattoos with inks that change colors as the balance of chemicals in the skin around them changes in development.

There’s also a tiny clip-on or stick-on sensor the size of an M&M that tells the wearer when they’ve been exposed to too much UV radiation, already sold for $60 by L’Oreal.

Now, the same lab that worked on L’Oreal’s sensor has developed a new one that, while slightly larger in diameter sticks on the skin and can run a rather complex set of diagnostics within a dollar coin-sized space.

Blood tests are the current standard for diagnostics, and blood is the standard because a relatively large volume can be collected and there are some chemicals that can’t be tested for in other bodily fluids.

But blood tests mean an unpleasant needle stick, and to test for more than one thing, a sample has to be sent off to a lab for analysis.

The new sensor patch changes that.

Sweat doesn’t carry every measure of health, but it is regularly used in tests for and about cystic fibrosis, an inherited lung condition that can be life-threatening if it isn’t managed closely.

Cystic fibrosis is caused by genetic mutations that in turn causes malfunctions in the cells that produce body fluids including both mucus and sweat.

When functioning properly, these are able to sieve out a certain amount of chloride from fluids. If too much chlorine stays in mucus, in particular, it can get gummy and clog the lungs.

Because sweat is made by the same cells, it provides an easy insight into how how well or badly someone with cystic fibrosis is doing – as well as those suffering other conditions, and even how well an athlete’s body is performing.

According to a study published Friday in Science Advances, the new patch can do all of this, just by sticking to the skin, being periodically flooded by sweat, and analyzing the droplets.

The patch’s super thin layers contain the equivalent of test tubs that the sweat slips into. Each has a different agent in it that reacts with chloride, lactate, glucose or pH levels.

Depending on how reactive the beads of sweat are with each of these, a different electric signal gets generated, and that signal is wirelessly transmitted to an equipped smart phone or other device.

In tests on human subjects, the device was quite effective at delivering real time gauges of the four body chemicals, but the researchers say there’s still a ways to go before it’s ready to be the next Fitbit.

Their findings so far ‘serve as the foundations for light-weight, miniaturized, soft, battery-free, skin-interfaced technologies,’ the authors wrote.

‘Future efforts will focus on further optimizing device performance and validating its use in extensive large-scale human trails including diabetic patients.

‘Adapting the designs and materials introduced here for applications in tracking patients with kidney disease, in screening for cystic fibrosis, in monitoring pharmacokinetics, and in measuring effects of pressure ischemia and stress markers represents promising directions for future research.’