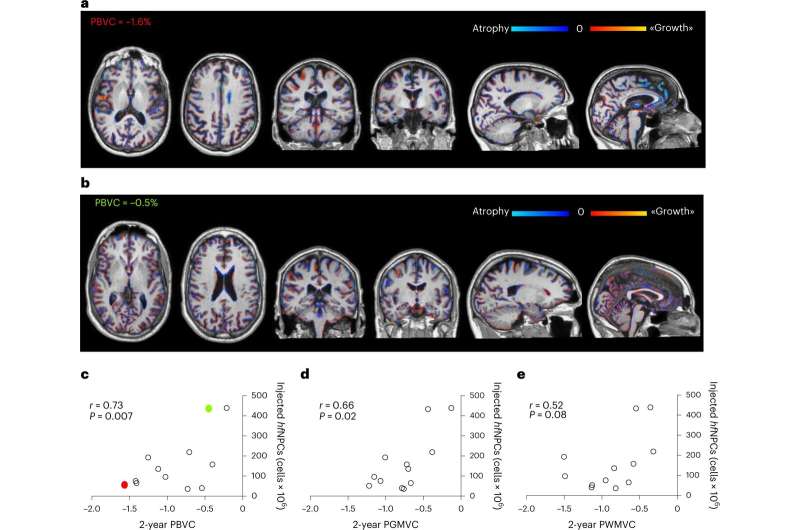 A team of researchers at IRCCS San Raffaele Scientific Institute, working with colleagues from San Gerardo Hospital, University Vita-Salute San Raffaele, IRCCS Ca’ Granda Ospedale Maggiore Policlinico and the University of Genoa, all in Italy, has found that patients with MS who received stem cells collected from aborted fetuses showed reduced markers of the disease in an early stage trial.

In their paper published in the journal Nature Medicine, the group describes collecting stem cells from 10- and 12-week-old aborted fetuses and injecting them into the spinal columns of patients in a clinical trial.

Multiple sclerosis is a neurodegenerative disease that can reduce feeling and use of limbs and other parts of the body. It is caused by the immune system mistakenly attacking and damaging the myelin sheath that insulates nerves. Many therapies have been developed to treat symptoms of the disease but there is no cure. In this new effort, the researchers tried a new approach to curing the disease—giving patients fetal stem cells donated by women who chose to have an abortion.

The clinical trial involved injecting stem cells into 12 patients four times. Prior to the injections, all of the patients had what were described as severe symptoms and were all bedridden. Additionally, each of the patients submitted to a lumbar puncture to extract fluid from the spinal cord to measure neuroprotective and anti-inflammatory molecule levels, markers for MS. Each also underwent an MRI scan to measure gray matter volume—patients with MS gradually lose brain mass.

After three months, each of the volunteers underwent another lumbar puncture. The researchers found that all of them had increases in neuroprotective and anti-inflammatory molecules in the spinal fluid. Each of the volunteers also underwent MRI scans two years after the injections; those patients given the largest infusion of stem cells experienced the least amount of gray matter loss.

The researchers note that it is still too early to determine if any or all of the volunteers have reductions in symptoms or slowdown of progression of the disease. They will all be monitored in the coming years to see if the stem cell injections provide any relief.