Trendy low-carb diets are fuelling a rise in bloating, diarrhoea and constipation among millennials because they are so low in fibre

Low-carb diets such as the Keto are fuelling a rise in stomach problems among younger people, nutrition experts have warned.

Carbohydrates have fallen out of fashion among millennials and the trend has had the knock-on effect of reducing the amount of fibre young people eat.

Fibre is vital for stomach health and is linked with lowering the risk of heart disease, stroke, diabetes and bowel cancer.

New research has found more than two thirds (67 per cent) of millennials have experienced stomach problems such as bloating, diarrhoea and constipation within the last year, compared to a third (33 per cent) of British adults of all ages. 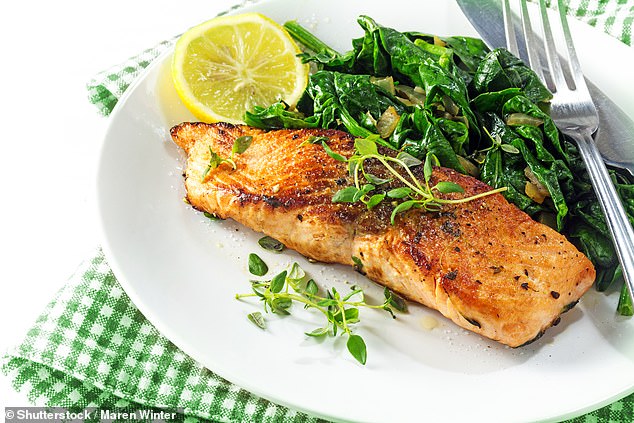 More than half of millennials (55 per cent) with problems said they suffered symptoms at least once a week.

And three quarters of younger people with stomach problems said it impacted negatively on their mood and emotional wellbeing.

WHAT IS THE KETO DIET?

The Ketogenic diet defines a low-carb, high-fat way of eating.

Following this eating plan forces the body into a metabolic state, known as ketosis, which starves the body of carbohydrates but not calories.

Carbs are shunned in the keto diet as they cause the body to produce glucose, which is used as energy over fat.

Keto diets therefore lead to weight loss as they make the body burn fat as its primary energy source.

On the diet, followers can eat:

‘This is not only highly concerning for the increased risk of coronary diseases but also for the gut which needs dietary fibre to nourish its good bacteria.

‘With emerging bodies of research showing the impact the gut has on our overall health and emotional wellbeing, looking after it with nourishing fibre-rich foods is extremely important and carb-cutting is therefore ill-advised.’

Around one in six people aged 18 to 34 are on a low-carb diet and a third of millennials say they want to be on one, according to separate surveys by the International Food Information Council Foundation (IFIC) and Insider magazine.

But researchers warned it would be difficult to ensure people were eating enough fibre because of the trend of ‘popular diets’ including the keto, Atkins and low-carb paleo diets, which all recommend cutting carbohydrates.

Around a quarter of all consumers believe eating carbs is directly linked to weight gain, according to the IFIC.

And last year, The Grocer magazine blamed the Millennial and Generation Z age groups for a drop in potato sales, saying they viewed the high-fibre vegetable as ‘stodge that will make them fat’.

Matt Perkins, nutritionist for Kellogg’s, said: ‘The most common issues with a diet lacking in fibre are the least glamorous.

‘Symptoms such as sluggish bowels, constipation, and runny stools can all mean you’re not getting enough – making you feel lethargic and generally feeling miserable.’

The Government changed its fibre guidelines in 2015 to increase the recommended daily intake to 30g.

The recommended amount for teenagers aged 11 to 16 is 25g, while children need 20g and preschool children aged two to five need around 15g.

But doctors believe most British adults eat just 18g of fibre every day, while teenagers and children get less than 15g per day.

Fibre is found in wholegrains and starchy foods like potatoes, as well as in fruit and vegetables.