I had just come back to my home in Kauai, Hawaii, from visiting my children on the mainland in September 2018 when I noticed an unusual purple blister on my hand. Everyone in Hawaii is generally aware of the risk of infection because rain, storms, and flooding that occurs often there draw bacteria and other pathogens into the bodies of water, contaminating them. It had just flooded at the time in my area, and I had gone in the water, so I went to a walk-in clinic to get the spot checked out.

I was prescribed some antibiotics and told that, if things got worse, to go to the ER. The medical staff didn’t seem terribly concerned, so I wasn’t either. Still, my husband was away on a fishing trip, so I texted a friend that Friday night that I wasn’t feeling well and asked her to check on me in the morning. We had a friend who had contracted sepsis, a life-threatening complication of an infection, and had to have their leg amputated as a result. So I wanted to put someone on guard to watch me, just in case.

The next morning, I woke up and took my temperature, just to be safe. I was relieved to see I didn’t have a fever. I texted my friend and let her know I was okay. I wasn’t feeling great, though. I was wiped out, and I went back to bed, thinking I had the flu or that maybe I was tired from traveling. I ended up sleeping through the day.

Sunday morning, I woke up at sunrise and knew something was very wrong.

I had never been so sick. I felt weak and was throwing up. I texted my friend and asked her to take me to the hospital. I didn’t want to call 911—I was concerned about disturbing the neighbors if an ambulance arrived.

When my friend arrived, she had to help me to the car because I was having difficulty walking. Apparently, I had sprained my ankle at some point and didn’t realize it—that was another tip-off that something was very wrong. 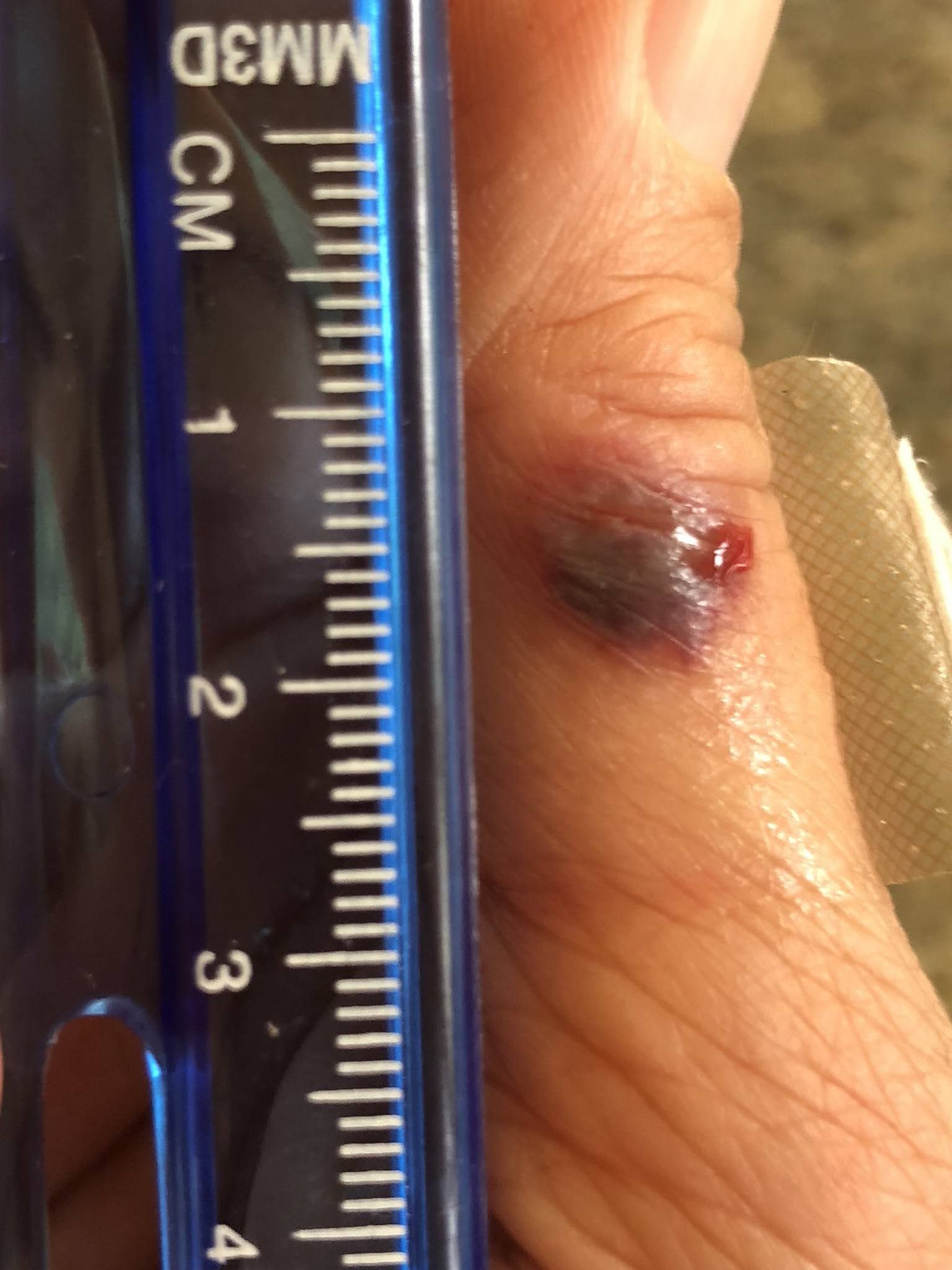 About 15 minutes away from the hospital, I started sobbing, saying that my hands and feet felt like they were on fire.

I later learned that I was getting disseminated intravascular coagulation, or DIC, a complicated condition that can happen when someone has severe sepsis or septic shock. With DIC, small blood clots can develop in your bloodstream, blocking blood flow to many parts of your body, including your limbs. It was so painful. All I could do was cry.

My friend called the hospital and warned them that we were coming. Once we arrived, medical staff met us with a gurney outside and rushed me inside. 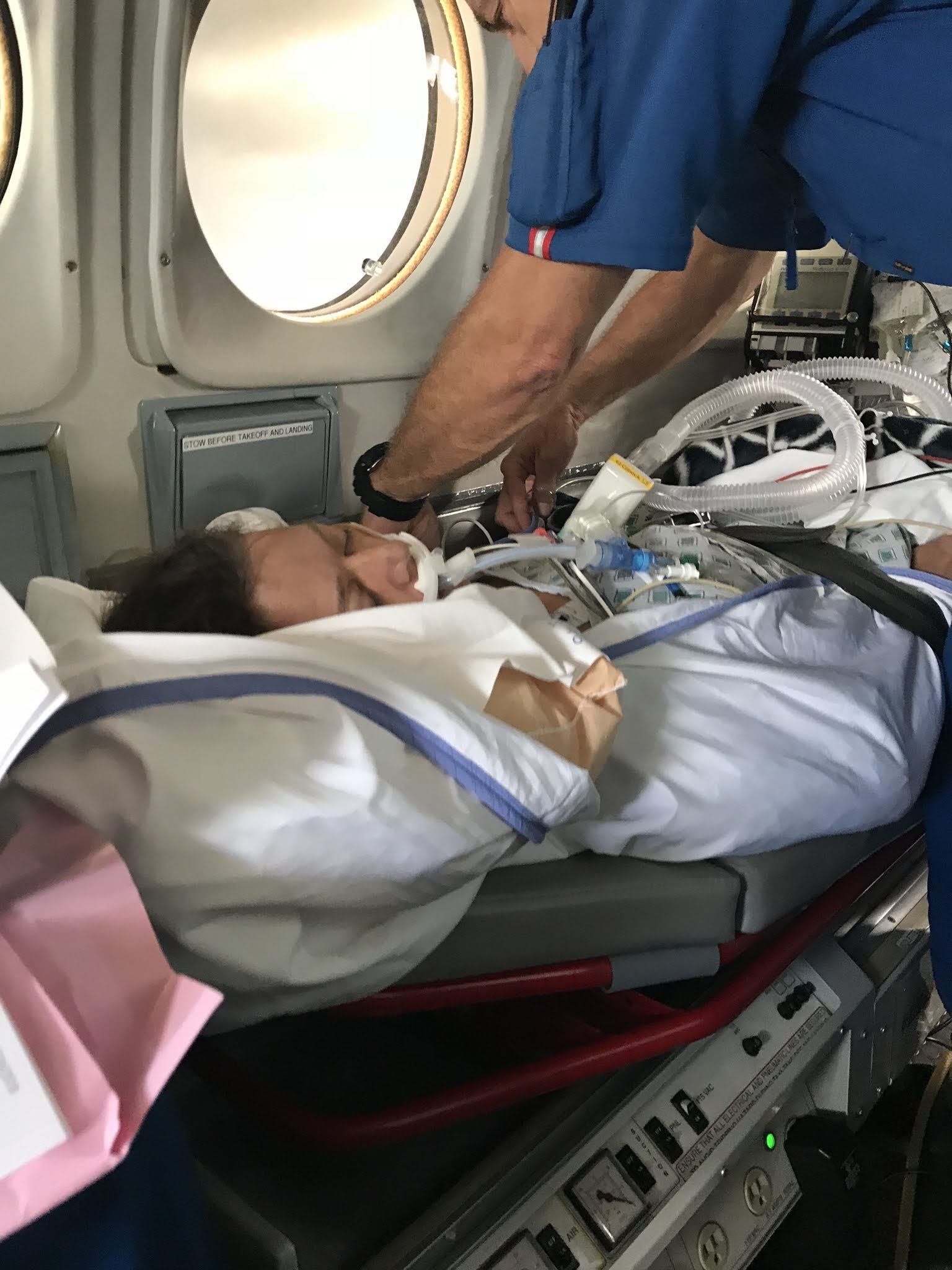 My memory of the next few days is fuzzy, but I’ve pieced together what happened based on what I do remember and what people have told me.

Blood tests came back and confirmed what doctors had suspected: I had sepsis.

That afternoon, my hands and feet started turning purple. The blood vessels in my fingers and feet were collapsing and being destroyed. I later learned that, if you’re not in the hospital when this happens, you will literally bleed to death internally. 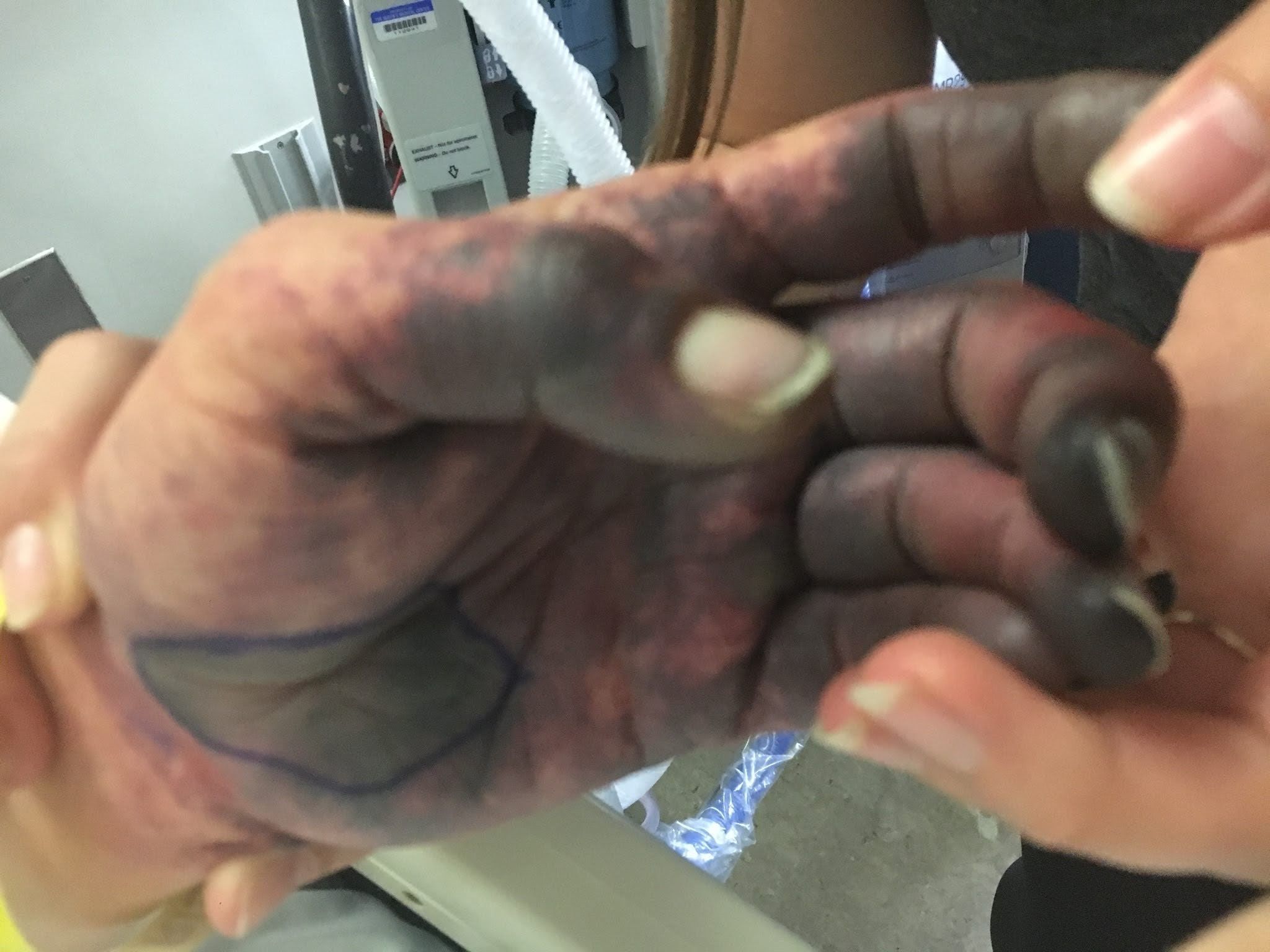 My kidneys and lungs were also failing, and I needed to be airlifted from the hospital in Kauai to a trauma center on Honolulu.

Doctors kept giving me antibiotics and fluids, but I wasn’t getting better. The next day, I was intubated (where a tube was put down my throat to help me breathe) and put into a medically induced coma.

My family was called in, and they were told it was serious.

I slowly started to get better but I was still very sick. After a week in the ICU, I finally had the tube removed from my throat and was more conscious. I saw my hands when I woke up—the fingertips were blackened and dark purple. I knew I was going to lose my fingertips. I could tell they were dead. It was so scary, and I wasn’t sure what to think. 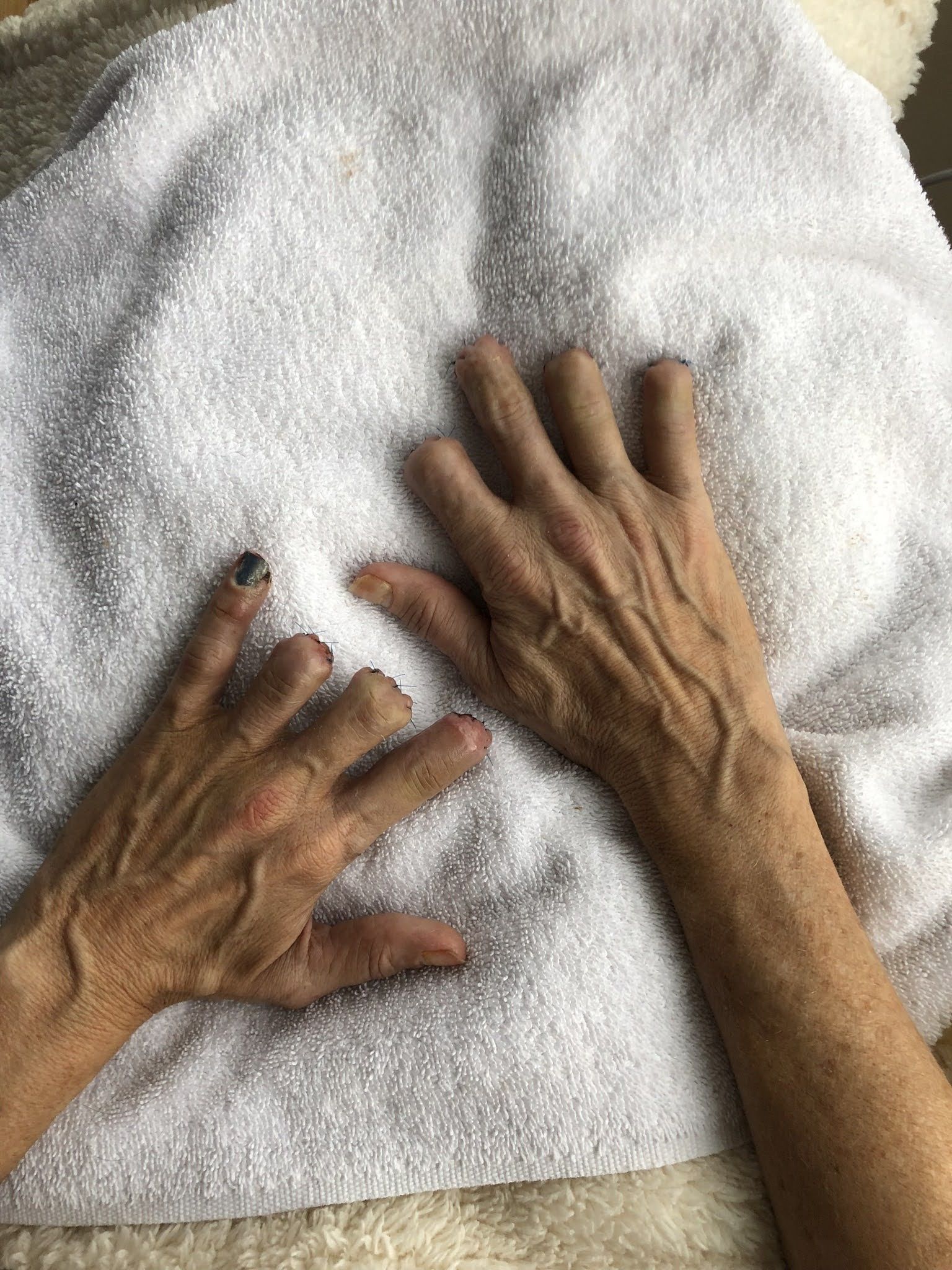 My feet were also purple. Doctors kept looking for a heartbeat on them but couldn’t find one. It was extremely traumatic to see and I kept praying that my feet would give some sign of life. They never did.

I started doing hyperbaric treatments in an oxygen chamber to try to revive my extremities. But, after doing them every day for three weeks, I finally knew it wouldn’t help. I turned to my husband and said, “I know we can’t save my feet. I don’t want to do this anymore.” So, we started planning for my future, which would involve removing my fingertips and feet. 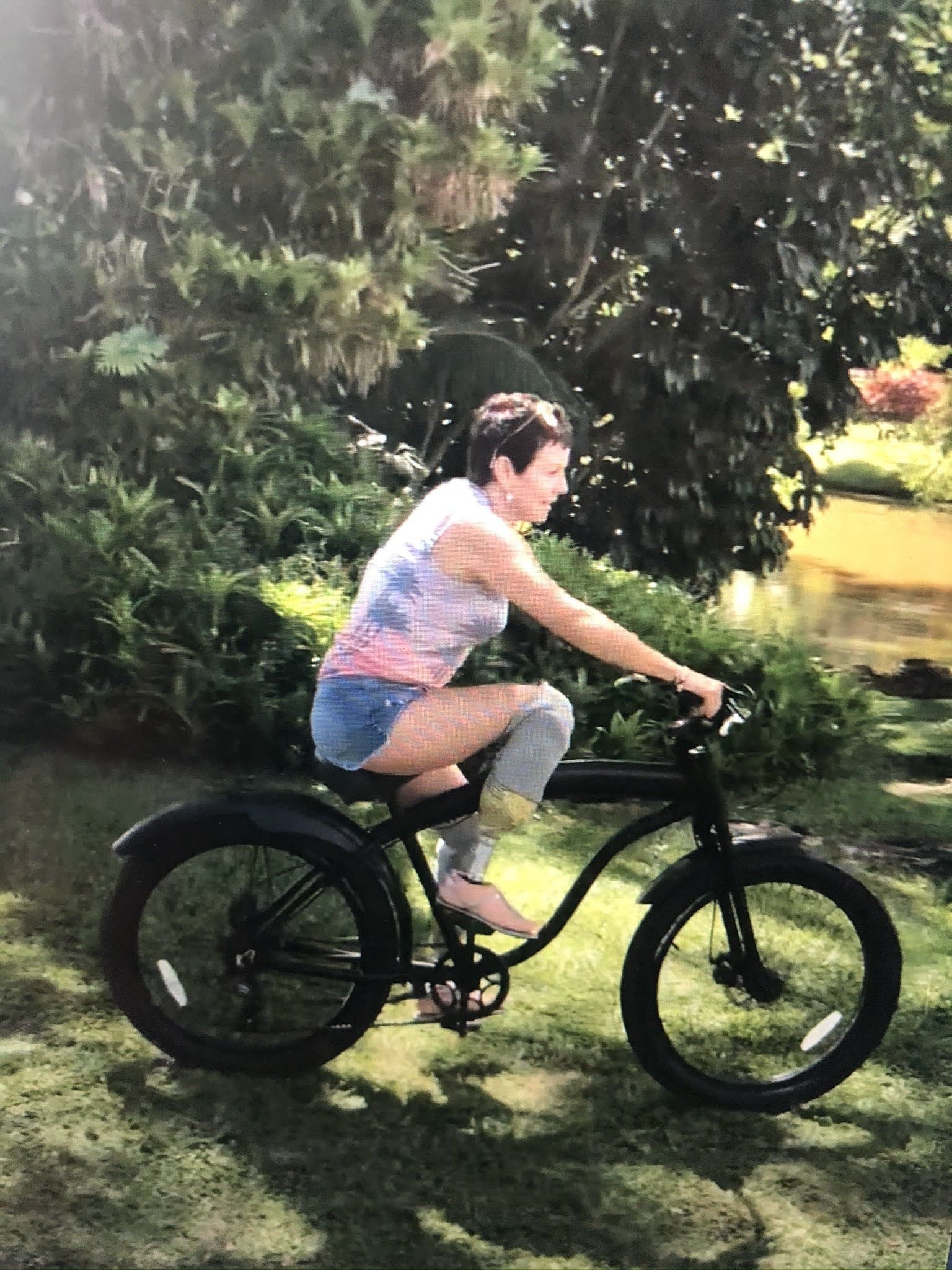 It was really, really hard to realize I would lose my fingertips and feet.

I think I always knew on some level that this would happen, but it was incredibly difficult to come to terms with. I had an overwhelming feeling of doom and helplessness. I couldn’t picture my life without fingertips. How would I type, write, and use my hands? And, without feet, how would I get around?

I cried a lot, and I was extremely depressed. I just didn’t know how to come to terms with all of this. But eventually, my fighting spirit took hold. Fighting was what I could do. I had lost part of the battle, but there was more to come.

My family took me to the Sepsis Alliance website to help me learn more about sepsis, and they also showed me things on social media about amputees who were living amazing, healthy lives. I also got a few books that women had written about being an amputee, including one by Paralympic snowboarder Amy Purdy.

I started to try to think about what life would be like after I healed. A new life.

We didn’t know anyone in Honolulu, so we decided to have my surgeries at Seattle’s Harborview Medical Center, where we had friends nearby.

About a week before Halloween, I had the surgery to remove my feet. I spent a week healing from that, and then had my hands done. I didn’t want to do it all at once. Despite life being out of control, I did have some choices and that was really powerful for me.

I left the hospital in a wheelchair and we stayed in a home in Seattle for about nine months. I had a home nurse there to help me and teach me how to adjust to life as an amputee. He would help me use the toilet, and would even put on a little makeup and help me with my hair to make me feel like my old self.

Right after Christmas, I got my first pair of prosthetic legs. I was able to stand up again for the first time in months. My daughter left to study abroad in Rome, and I made a goal to go and visit her in a few months. I was able to do it—and we had an amazing time.

I was learning that, even in a wheelchair, I could live a full life.

I’ve come a long way in my recovery, and I’m happy. This is my life now, and I want to use it.

It’s been 2.5 years since this all happened. My wheelchair is in retirement, and I mainly rely on my prosthetic legs. I never jump out of bed, thinking that I still have my legs, but I do wake up thinking that I have them.

I work hard to spread awareness about the signs of sepsis and the importance of seeking care if you suspect you or a loved one has the condition. Even though I was aware of sepsis before, I didn’t realize that it doesn’t always cause a high temperature, something I had been relying on to tell me if I was actually sick.

While I’ve always been a positive person, I can’t and don’t want to deny mynew reality and how emotionally difficult it can be to navigate. So, every day, I give myself a moment to focus on the things I can’t do. For example, even though we live in Hawaii, it’s difficult for me to go into the water right now because of the legs I have. That’s frustrating—I love the water—but I’m working to get fins and special feet that will allow me to swim.

I lead a full life, though. I can drive a car and ride a bike, and I’ve been snowboarding, kayaking, wakeboarding, and stand up paddle boarding—not every day, but I do it.

I can see in the future that there won’t be many things I won’t be able to do. For now, I’m just trying to be positive and live in the moment.