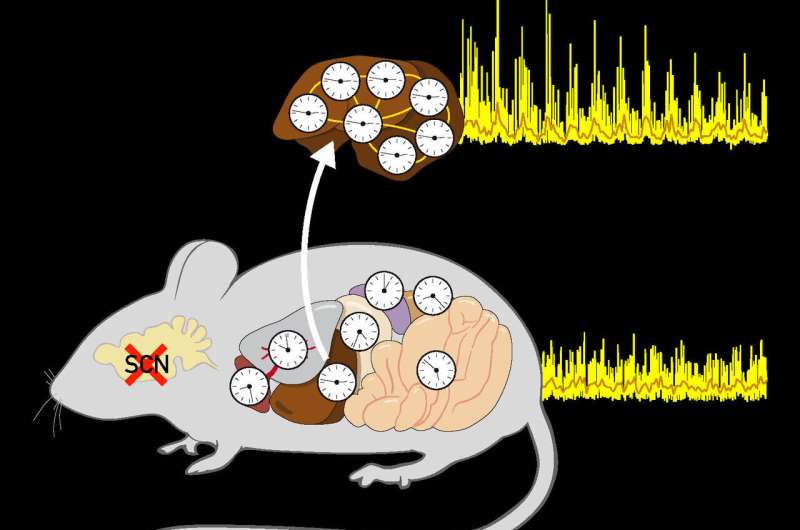 Circadian clocks, which regulate the metabolic functions of all living beings over a period of about 24 hours, are one of the most fundamental biological mechanisms. In humans, their disruption is the cause of many metabolic diseases such as diabetes or serious liver diseases. Although scientists have been studying this mechanism for many years, little is known about how it works. Thanks to an observation tool based on bioluminescence, a research team from the University of Geneva (UNIGE) were able to demonstrate that cells that compose a particular organ can be in-phase, even in the absence of the central brain clock or of any other clocks in the body. Indeed, the scientists managed to restore circadian function in the liver in completely arrhythmic mice, demonstrating that neurons are not unique in their ability to coordinate. Results can be discovered in the journal Genes and Development.

For a long time, the scientific community considered that circadian rhythms were entirely controlled by a central clock located in the brain, before discovering, a few years ago, the existence in all cells of the body of a small molecular clock. “Nevertheless, the brain clock was deemed indispensable for the synchronization of all peripheral clocks,” says Ueli Schibler, honorary professor at the UNIGE Faculty of Science, who initiated the work. “However, usual research tools did not allow us to explore the validity of this hypothesis. Indeed, to do so, we must be able to follow in real time, over a relatively long period of time, the expression of the circadian genes of an animal with or without a functional brain clock,” explains Flore Sinturel, researcher at the Department of Medicine of UNIGE Faculty of Medicine and first author of this work.

As early as 2013, Professor Schibler’s team developed a completely new technology, now commercially available , which makes it possible to monitor the activity of a specific organ and the circadian rhythms that control it. “We were inspired by the principle of bioluminescence that can be observed in fireflies, for example,” he explains. “Our mice carry a circadian reporter gene that produces an enzyme, luciferase. We then add luciferin to their drinking water, a substance which, when oxidized by the luciferase, causes photon emission.” Light is then captured by a photomultiplier that records the number of photons emitted per minute and thus detects the expression of the circadian reporter gene over time.

After the central clock was removed, scientists observed that all the clocks in the body are in different phases. However, at the level of a single organ—the liver in this case—the mice retain a robust and coordinated circadian rhythmicity. So, while the central clock can synchronize all the organs in the same phase, the cells communicate enough to maintain a coordinated rhythmicity within a single organ. “While it was thought that only neurons had strong enough connections to ensure this circadian coordination, we are now demonstrating that this is not the case,” says Flore Sinturel. “This puts the singularity of the central clock into perspective.”