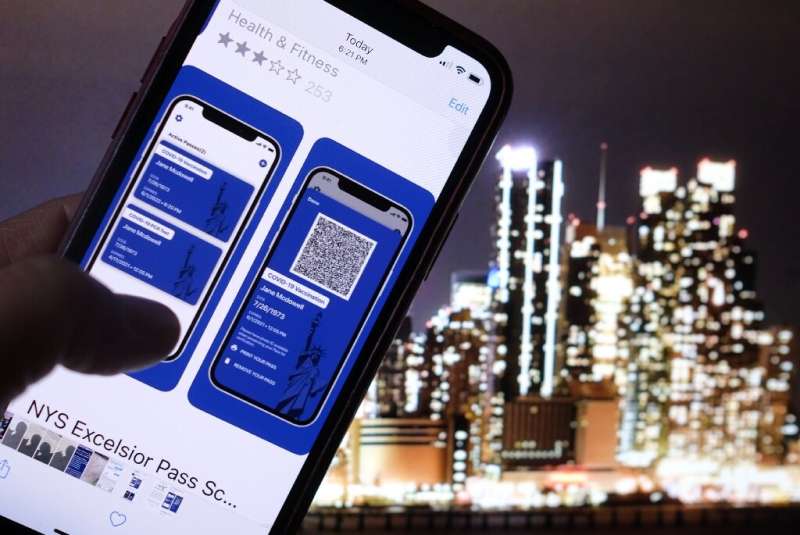 As the United States’ vaccination campaign accelerates, so-called vaccine passports are gaining traction despite political divisions and a fragmented health care system that complicates the centralization of data.

Asher Weintraub, 17, was happy to show off the new digital New York state “pass” that he downloaded to his smartphone, which, via a QR code, certified that he was vaccinated against Covid.

“I think it is a good thing, you don’t have to like provide all (sorts of) forms and documents each time,” he said, displaying his code at the entrance to one of the first indoor concerts in Manhattan since March 2020.

Led by Democratic Governor Andrew Cuomo, New York is the only American state to have launched such a pass, which is voluntary and has been done in partnership with IBM.

Still not widely used, it immediately verifies whether the carrier has received the vaccine or has recently tested negative for the disease.

Other state leaders have firmly rejected the idea.

The orders effectively bar businesses from requiring that customers show a certificate.

“People have certain freedoms and individual liberties to make decisions for themselves,” DeSantis said.

The Republican governor of South Dakota, Kristi Noem, described vaccine passports as “one of the most un American ideas in our nation’s history” on Twitter.

President Joe Biden’s administration intends to stay out of the controversy. On Tuesday, White House spokeswoman Jen Psaki said there would be “no federal mandate requiring everyone to obtain a single vaccination credential.”

She said Washington would instead issue guidance to ensure systems “are not used against people unfairly,” with regards to privacy and security concerns.

Even without the government leading the way, many believe that digital means of certification will develop in a world where smartphones are an essential tool of everyday life.

Israel’s rollout of a “green pass” following a much-lauded speedy vaccine campaign is being watched with interest.

For now, any US passes are set to be private or state initiatives. In addition to the New York pass, the Common Pass project seems the most advanced.

Launched by the Commons Project, a non-profit specializing in the interconnection of digital health data, the pass is already used on a daily basis by a dozen international airlines, according to director Paul Meyer.

Unlike the proprietary system designed for New York state, the Common Pass platform is open source, meaning its code is available for anybody to use.

It uses a secure data protection system and Meyer sees it emerging as the “standard” in a sector that is expected to boom as pressure builds to revive economies.

The organization is in “active dialogue” with the European Union, which is working on a pass that would allow free travel within the Schengen area, and several European governments, Meyer said, without specifying which ones.

“The US has this challenge of having this fragmented system, so it is much easier to work with countries where there’s an existing national system,” said Meyer.

Within America’s essentially private health system, states are responsible for providing any public services, in contrast with the typically public health care systems of European countries where data is centralized.

If the United States’ political polarization limits the development of a pass, Meyer hopes that the “freedom to get back to life” argument, including allowing people to travel, attend baseball games or go to the theater, will prevail.

Marcus Plescia, chief medical officer of ASTHO, an association that brings together health officials from US states, believes that “most people think to have a vaccine passport is going to be useful at least in some situations.”

For now, the discussion is still “a little premature” given the millions of people still not fully vaccinated, he said. But he would not be surprised if a Covid vaccination certificate was soon required by schools and by some private employers.