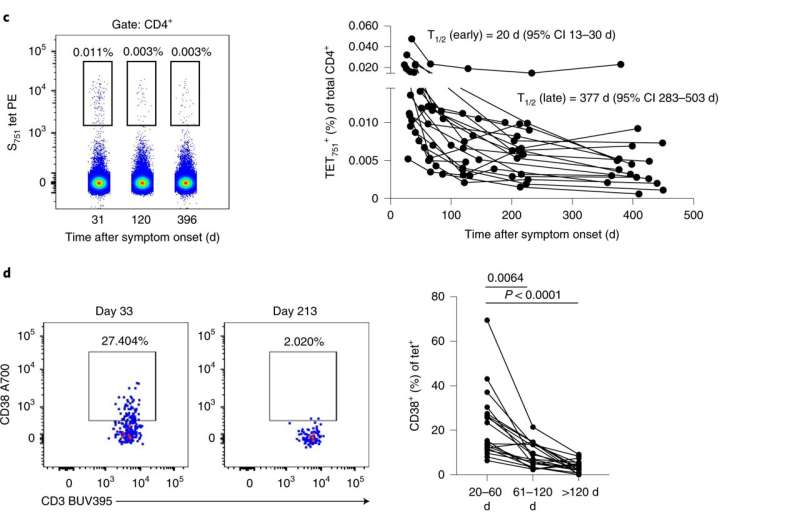 Researchers at the Peter Doherty Institute for Infection and Immunity (Doherty Institute) have shown that the body’s T cells provide long-lasting memory against the virus following vaccination or infection from COVID-19.

Published today in Nature Immunology, the team utilized new technology to track the T cell responses of people who had recovered from COVID-19 for 15 months and found there was a sustained level of these cells capable of recognizing the SARS-CoV-2 spike protein.

University of Melbourne Dr. Jennifer Juno, a Senior Research Fellow at the Doherty Institute and senior author on the paper, said that despite an initial contraction of the immune response immediately following infection, the T cells stabilized at six months and remained level after 15 months of monitoring.

“Even though some parts of the immune response wane, we can now see that T cells recognizing the virus are quite stable over time. After more than a year, they were still roughly 10-fold higher than someone who had never been exposed to the spike protein through infection or vaccination,” said Dr. Juno.

While B cells are responsible for producing the antibodies that recognize SARS-CoV-2, T cells play a crucial role in supporting the development of the B cell response. Without T cell help, B cells are unable to produce high amounts of antibodies that can bind to the virus and stop infection.

When individuals were re-exposed to the COVID-19 spike protein through vaccination, the part of the virus that enables SARS-CoV-2 to attach and enter cells in humans, the T cells quickly reactivated and increased in number.

“Vaccination boosted the levels of these T cells to be up to 30 times higher than they were before,” Dr. Juno said.

“In general, we saw that the vaccines generate the same amount of T cells as someone who had been infected. We also saw that the third dose does an incredible job at re-activating those T cells and bringing the levels back up again,” said Dr. Juno.

“Usually we have to stimulate the cells in the lab before we can measure the T cell response. However, using tetramers, we can look at them straight from the blood samples, meaning we are getting a more accurate picture of what is happening,” said Dr. Juno.

The team are now looking at how these T cells react when breakthrough infections happen.