A new form of the vaginal ring contraceptive protects against pregnancy for up to a year, research suggests.

Like many existing contraceptives, ‘Annovera’ prevents pregnancy by slowly releasing the hormones oestrogen and progesterone.

The device was tested in more than 2,200 women, with results revealing it is 97.5 per cent effective – slightly less than its competitor NuvaRing at 98 per cent.

However, NuvaRing has to be taken out every three weeks, before being replaced with a new device a week later.

Unlike Annovera, NuvaRing also has to be stored in a fridge before it can be dispensed, making it less suitable for women living in underdeveloped countries.

The ‘awesome’ device could be available in the US by the end of the year. It is unclear when it may come to Europe. 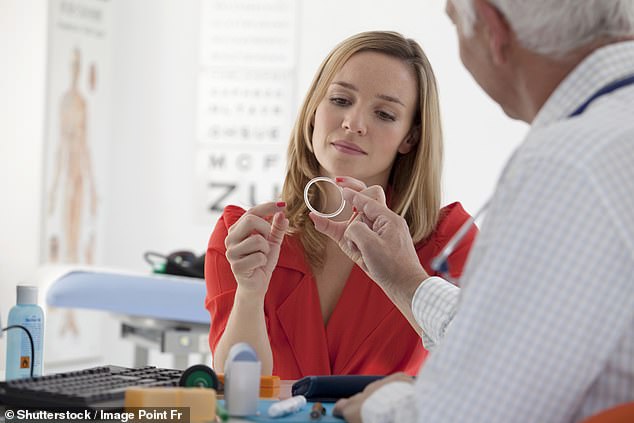 The studies were carried out by the Albert Einstein College of Medicine in New York.

Study author Dr Erika Banks, of the department of obstetrics & gynecology and women’s health, told Reuters: ‘This is a very exciting addition to the options for women to prevent unintended pregnancy.

‘The advantages are huge in that women don’t have to go to the pharmacy every month and don’t have to have a refrigerator to store them in. Patients loved it.’

NuvaRing has to be stored in a fridge before it can be dispensed by a pharmacist, according to drugs.com. Once given out, it can be kept at room temperature for up to four months.

Similar to NuvaRing, Annovera is made of soft plastic and measures around 2inch (5cm) across.

However, Annovera can be removed for up to two hours and still protect against pregnancy. This may benefit couples who can ‘feel’ the contraceptive during intercourse.

However, Dr Banks insisted the contraceptive can be worn during sex, with most men not noticing it, and those that do are not ‘bothered’.

Annovera was tested in two large studies, one of which was carried out in the US and the other internationally.

WHAT IS THE VAGINAL RING CONTRACEPTIVE?

The vaginal ring is a soft, plastic device that a woman places inside her vagina.

Known as NuvaRing, it releases a continuous dose of the hormones oestrogen and progesterone into the bloodstream.

This prevents the ovaries releasing an egg each month.

NuvaRing also thickens the mucus in the cervix, which makes it difficult for sperm to move through it.

And it thins the lining of the womb so a fertilised egg is less likely to implant.

If used correctly, the ring is 98 per cent effective.

NuvaRing is left in place for three weeks, before being removed and replaced a week later.

Women are protected during the seven-day break.

They will also be protected if they insert the ring on the first day of their period.

If they inset it any other time, they will need to use additional contraception for the first seven days.

NuvaRing can be left in during sex. It does not protect against sexually transmitted infections.

The most common side effects of NuvaRing are vaginal discharge, headaches, nausea, breast tenderness and mood swings.

There is a small ring of blood clots.

Research also suggests women who use NuvaRing have an increased risk of breast cancer, which reduces after they stop using it.

The trials’ combined 2,265 women, aged 18-to-40, were told to wear the rings for 21 days before removing them for a week, to mimic a normal menstrual cycle, over three years.

They were also told they could remove Annovera for a maximum of two hours at a time. Any longer may affect its efficacy.

Results – published in The Lancet Global Health – revealed that if 1,000 women used the contraceptive, 25 could become pregnant.

This makes Annovera 97.5 per cent effective at preventing pregnancy.

The researchers followed up 290 of the participants, who all started to menstruate as normal when they stopped using the device.

Thirty eight of these women became pregnant, of which 24 conceived within six months of the ring being removed.

It is a common fertility myth that taking hormonal contraceptives over a long period of time reduces a woman’s chance of conceiving.

The Annovera studies did not record any side effects.

NuvaRing, which contains the same hormones as the new contraceptive, has been linked to tissue irritation inside the vagina, headache, mood changes, nausea and weight gain.

Annovera was approved by the Food and Drug Administration in the US in August last year.

The contraceptive will be sold by the pharma firm TherapeuticsMD, Inc either later this year or in 2020.

‘It’s awesome that it works for a full year,’ she said.

‘This will change the landscape for us.’

TherapeuticsMD has not announced the cost of Annovera but has agreed to provide significantly reduced pricing to family planning clinics that serve lower-income women.

Annovera was developed by the non-profit international research company Population Council, which is trying to get the contraceptive into developing countries.

Ruth Merkatz, director of clinical development at the Population Council, added it is not easy to develop a contraceptive that contains another medication to last a year without the need for refrigeration.