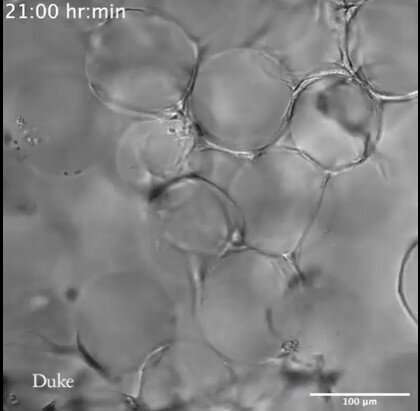 Researchers at Duke University have captured days-long time-lapse videos of young neural cells moving and growing within a novel 3D synthetic biocompatible structure. By literally watching how the cells respond to natural biochemical signals embedded within the material, biomedical engineers hope to develop biogels that can repair and regrow brain tissue after a stroke or other trauma.

The results appeared online June 22 in the journal Advanced Materials.

Repairing and regrowing brain tissue is a difficult task. Left to its own devices, the brain does not regenerate lost synapses, blood vessels or other structures after suffering an injury, such as from a stroke. Dead brain tissue is instead absorbed, leaving behind a cavity devoid of anything recognizable as healthy brain tissue.

But that hasn’t stopped researchers from trying to regenerate damaged brains anyway. One common approach used by biomedical engineers is to provide a new medium for the diverse pieces of brain tissue to move into, loaded with various nutrients and biological instructions to encourage growth.

While scientists in the field have historically reached for a homogenous, gelatinous biomaterial to support neural regrowth, Tatiana Segura, professor of biomedical engineering at Duke University, has developed a different approach. Her biomaterial built to encourage all types of healing and growth is made of millions of tiny gelatinous spheres packed together to form a stable scaffold.

“Most other labs use nonporous hydrogels that are sort of like a huge chunk of Jell-O, and cells have to eat away at it before they can lay down material to regrow,” said Segura. “Ours is more like soft oranges packed in a box, which provides a bunch of pockets and void spaces where cells can move through and grow into.”

The box-of-oranges approach—called microporous annealed particle (MAP) scaffolds—has proven promising in a wide number of tissues such as skin and bones. And in 2018, it was shown to reduce inflammation and promote neural progenitor cell (NPC) migration into the stroke lesion.

This observation led Katrina Wilson, Ph.D. candidate in Segura’s lab, to engineer MAP scaffolds to further guide how these progenitor cells differentiate. Not quite as immature and dexterous as stem cells, neural progenitors are still capable of becoming most, if not all, types of cells found in the brain. Being able to tell them where to go and what to become would be a boon to developing brain-healing treatments.

In the human body, stem cells and progenitor cells respond to biological cues from various structures and proteins found around them. One source of instruction comes from the laminin proteins that make up the body’s biological scaffolding called the extracellular matrix.

In the new paper, Wilson embedded different combinations of portions of these proteins called peptides within her synthetic MAP scaffolding and then watched what happened—quite literally. She created time-lapse videos over the course of several days that show how progenitor cells respond to the peptide-painted MAP scaffold.

“We saw the cells attach to the scaffold over time and actually physically move it around,” Segura said. “We used to think of it as just a jungle gym with kids playing on it. But that’s not what we saw, cells exert physical forces on the scaffold that are sufficient to cause it to move.”

This observation, however, was not uniform for all peptide cocktails. MAP scaffolds modified with a different peptide ended up turning into tiny balls called neurospheres, which did not move the scaffold but instead darted in and out of different depths while retaining their ability to choose different maturation paths. Both results, Wilson says, could be useful for a wide variety of medical applications.

“There is a big potential for neurospheres to be used as models for studying developmental neurotoxicity or for drug screening, and the cells spreading and differentiating is highly applicable to our ongoing work in promoting tissue regeneration after stroke,” Wilson said. “While most platforms for this type of work are stuck in two dimensions and aren’t great for simulating what’s happening in a three-dimensional body, our platform is 3D and could make a great model for testing and understanding how NPCs work.”