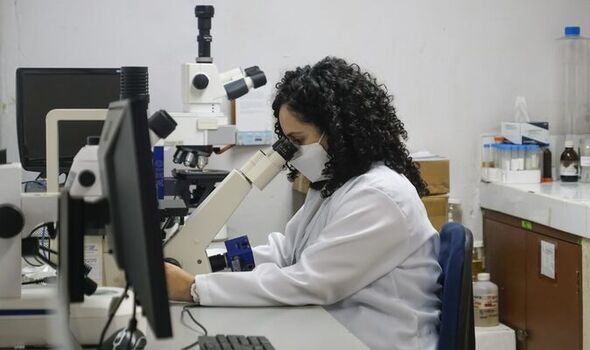 Michelle Mitchell, chief executive of Cancer Research UK, is “fiercely proud” of the women who receive funding that drive life-changing discoveries. But she warns despite progress in tearing down barriers and tackling gender bias, more must happen to encourage and enable them to thrive.

“We see it in our own research grant funding, where fewer women than men apply for, and are funded at, senior levels.”

Ms Mitchell says that could mean there are fewer female scientist role models and “discourage progress for future generations”.

Professor Frances Balkwill, a researcher for the charity who has worked in the field for more than 40 years, said an area of progress has been support for working mothers.

She said: “When I had my first child, I was due to speak at a conference six weeks after her birth while I was still breastfeeding.

“My request to bring her and for accommodation for someone to look after her while I was at the conference was met with a refusal and the comment, ‘If we let you bring your baby, everyone will want to bring their children next year’.”

But she added: “I prevailed though and took her to the conference.”

Prof Balkwill wants a national survey of women scientists to investigate whether improvements on shared parental leave have helped.

She says it should also find out what other support women want in order to build successful careers while raising a family.

In addition, she says: “Mentoring is important. Maybe mentoring during maternity leave would be helpful as well.”

Women have long been under-represented in science, technology, engineering and mathematics (Stem).

The worst gender imbalances were seen in computer science and engineering and technology.

Dr Emilia Lim, of Cancer Research, who is also a postdoctoral researcher at the Francis Crick Institute, is working on a project trying to understand the causes of lung cancer in people who have never smoked.

She took time off to have her first child during the pandemic and says her colleagues were incredibly supportive. Dr Lim says she has been “blessed” with mentors who understood the challenges gender bias brings and looked out for her during her career.

She says: “Over the years, I have also encountered increasingly more women in science who have become role models for me and continue to encourage me to achieve greater heights.

“I believe we need to continue to provide more encouragement to girls who would like to be part of Stem and champion them every step of the way.”

As a young researcher in 1999, Professor Kairbaan Hodivala- Dilke was the only woman at a senior staff meeting.

She felt particularly “angry” and “demoralised” that it fell to her to take the minutes.

The Barts Cancer Institute’s deputy director, 55, said: “At home and school, we must help children understand that women can be amazing scientists.”

Men have nearly twice as much as women to live on in retirement, say studies.

When both private and public pensions are added together women get a “paltry” £26 per day to live on. But men receive £44 per day, say figures analysed by Women Against State Pension Inequality campaign group.

The difference in private pensions is more acute. Men aged 65 to 74 have average savings of £182,700, while women of the same age have just £25,000 saved up, according to the Office for National Statistics.

More than half of women (52 per cent) expect to worry about finances compared to 47 per cent of men, says HSBC UK.

And one in 10 report not being able to afford household bills.

We want to make sure that inspiring women are visible.

As a CEO and mother, some of the most important support I was ever given was having managers who were supportive of flexible working and who understood and appreciated that flexibility would mean doing my best work.

Cancer Research UK has encouraged a big shift to more flexible working for both our office-based staff and scientists.

It’s important to ensure people can have a balance in their home and professional life so that they can excel when they are at work.

We’ve also significantly improved our research PhDs for medical students to allow brilliant female clinician scientists to succeed in bringing new treatments to patients. And we’ve established a Women of Influence programme, which provides support, networking and mentoring of female scientists by leading women in business.

We will continue to set ambitious equality, diversity and inclusion targets on who applies and receives funding from us because we want to see the best and broadest ideas on how we beat cancer for everyone.

Only by supporting women better will we achieve our mission.