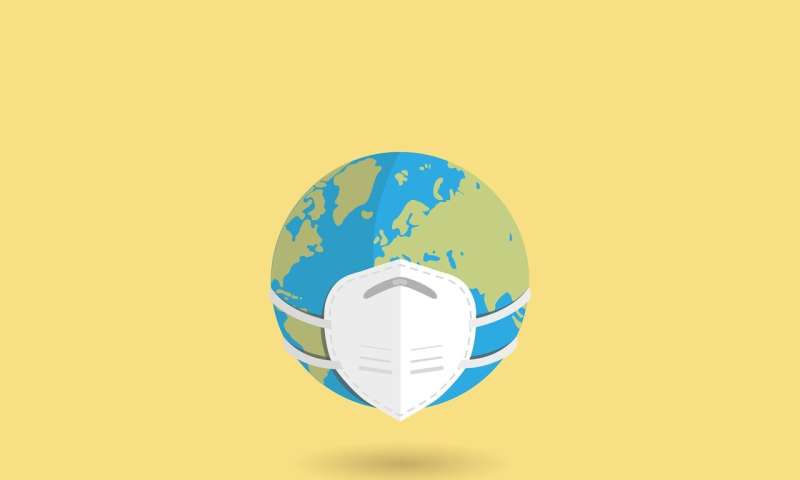 For nearly a year, the novel coronavirus and the resulting COVID-19 pandemic have dominated headlines across the world, and justifiably so. With nearly 68 million cases reported and more than 1.5 million deaths worldwide as of December 7, 2020, the short-term impact of this disease has been stark and devastating.

But as health care providers, researchers and public health professionals across the globe grapple with the immediate challenges presented by the COVID-19 pandemic—preventing viral transmission, identifying cases, successfully treating the disease and creating an effective vaccine—scientists’ thoughts also turn to the future and the long-term health issues the pandemic might present to the more than 43 million people who have survived SARS-CoV-2 infection.

Many COVID-19 survivors will face sequelae, or the aftereffects of infection, predicts Pinchas Cohen, dean of the USC Leonard Davis School. Damage to the lungs, brain and heart has already been observed in survivors, and “our medical system is going to be highly impacted,” he says. However, the true extent of any long-term effects will likely take years to measure accurately.

While many questions remain about what the aftermath of the pandemic will look like, we can take a few clues from history, say USC University Professors Eileen Crimmins and Caleb Finch.

“I think that COVID is setting us up for a hundred years of problems,” predicted Crimmins, who holds the AARP Chair in Gerontology at the USC Leonard Davis School.

Looking to the past

A little more than 100 years ago, the world faced another pandemic that gripped the world’s attention. The culprit then was an H1N1 influenza virus that became known as the “Spanish flu.”

In total, the 1918–1919 pandemic claimed at least 50 million lives, after having infected around half a billion people—one-third of the world’s population at the time. Approximately 675,000 people died in the U.S., with the flu first identified in this country in soldiers stationed at an Army base in Kansas during the spring of 1918.

The mortality patterns of the 1918 flu differed from COVID-19, Crimmins says. In both pandemics, individuals over age 65 were at particular risk, but children younger than 5 and adults between 20 and 40 years of age also faced a high rate of death from the 1918 flu.

But beyond the high death toll, the full impact of the 1918–1919 pandemic wouldn’t be realized until more than 60 years later. In 2009, Finch and Crimmins published a study examining epidemiological data on individuals born in 1919, who were newborns or second- or third- trimester fetuses during the height of the pandemic. The data revealed that these individuals had approximately 25% more heart disease after age 60, as well as increased diabetes risk, compared to a similar cohort of individuals not born in 1919, including those who were older infants during the pandemic.

While the researchers didn’t have data on exactly which people were exposed to the flu either in utero or as infants in 1918–1919, the results were nevertheless strikingly different between the two age cohorts. In addition to higher levels of ischemic heart disease as well as diabetes in those who could have been exposed prenatally, U.S. census data indicated that the cohort of children born in early 1919 attained less education and had lower economic productivity over their lifetime, suggesting a higher level of developmental impairment or other long-term health issues in those with prenatal flu exposure at the height of the outbreak. Adult height (as recorded at World War II enlistment) was also slightly lower for the 1919 birth cohort than for those born in adjacent years, which suggests that overall growth was also negatively affected.

“The fact that this cohort of people had elevated risks of disease even more than six decades after the pandemic indicates that maternal exposure to the influenza virus appears to have had wide-ranging and long-lasting health effects on offspring,” Crimmins says. Subsequent studies have shed further light on the potential for inflammation to cause indelible damage, especially to the heart.

Crimmins and Finch hypothesize that one mechanism of this could be the increase in inflammatory response, including an increase in the protein interleukin-6 (IL-6), resulting in developmental changes affecting the fetus. An increase in IL-6, which can cross the blood-brain barrier, has been observed with COVID-19, with such an increase part of the dangerous “cytokine storms” seen in severely ill patients. But there are other mechanisms linked to the novel coronavirus that provide additional cause for concern, says Finch, who holds the ARCO/William F. Kieschnick Chair in the Neurobiology of Aging at the Leonard Davis School.

Effects could be widespread and long term

While the most well-known hallmark of COVID-19 is a marked deterioration in lung function, health care providers and COVID-19 survivors have reported many other startling and dangerous effects of the illness, including heart damage, blood clotting that results in strokes, cognitive difficulty, general debilitation and weakness. A number of survivors report being among those known as “long-haulers”—individuals who continue to suffer from ill effects long after the virus is no longer detectable in their bodies.

This array of wide-ranging effects throughout the body may be due to the affinity of the virus for the angiotensin-converting enzyme-2, or ACE2, receptor, Finch says. ACE2 receptors are widely present in cells of the alveoli—tiny, saclike structures in the lungs that play a key role in the exchange of oxygen and carbon dioxide as we breathe. The receptors are also found on cells in many tissue types throughout the body, including within the heart, blood vessels, kidneys, liver and gastrointestinal tract.

“[ACE2 receptors] are found in cells everywhere,” he says. “You can anticipate a very broad number of consequences.”

Under healthy circumstances, ACE2 plays an important role in modulating the activity of the protein angiotensin II in the renin-angiotensin-aldosterone system (RAAS) pathway, a process regulating body functions such as blood pressure, wound healing and inflammation. However, the “spike” proteins of SARS-CoV-2 bind to a cell’s ACE2 receptors like a key into a lock, granting the virus access to the cell, enabling the virus to replicate itself and subverting normal ACE2 function in the process. This allows angiotensin II activity to go unchecked, which likely contributes to tissue injury, especially in the heart and lungs.

“It creates cell death and a fibrous response,” Finch explains, “so the lung tissue is displaced by scar tissue, in effect. This also has a clotting consequence that’s been unknown for the influenza series.”

“What’s happening to people’s lungs now seems totally different [than with the 1918 flu],” Crimmins says, explaining that people who died from the 1918 flu tended to die of secondary infections following the illness, including bacterial pneumonia. In comparison, COVID-19 deaths appear to be more directly attributable to deterioration of lung function. “The lungs just fall apart,” she says.

According to a recent study published in JAMA, even asymptomatic people who have tested positive for SARS-CoV-2 infection have been found to have signs of tissue damage, including myocarditis, or inflammation of the heart. Could this be a precursor to an increased risk of heart disease or other health issues in the future, such as those seen with people born in 1919?

With people of all ages affected, “We may have a century of COVID damage,” Finch warns.

An epidemic of mistrust

Amid the ongoing threat to health, the current pandemic also echoes the 1918–1919 influenza in the debates surrounding societal responses to the illness, increasing the risk for more infection and thus more long-term impact.

The sound bites are familiar, according to news articles from 1918 and 1919. Scientists and public health officials urged the shutdown of crowded gathering spaces; supported mandates to wear masks; and promoted isolation, quarantine and hygiene as the main weapons in the battle against the illness. Those opposing such public health measures made assertions about the futility of or harm caused by wearing masks, as well as the economic risks of shutting down businesses. People fought against the idea that the pandemic was a serious threat—even though there was not yet a vaccine for influenza, nor were there antibiotics to treat resulting secondary infections. However, the media landscape was not nearly as varied, nor as constant and pervasive, as it is today.

In 2020, individuals’ behavior in response to the pandemic has closely correlated with the kinds of mass media outlets they trust, according to a study published in BMJ Global Health by USC Ph.D. in gerontology students Erfei Zhao and Qiao Wu and co-authored by Crimmins and associate professor of gerontology and sociology Jennifer Ailshire.

Zhao, Wu and colleagues analyzed response data from the Understanding America Study’s COVID-19 panel on how often participants performed five virus-mitigating behaviors during the coronavirus pandemic: (1) wearing a face mask, (2) washing hands with soap or using hand sanitizer several times per day, (3) canceling or postponing personal or social activities, (4) avoiding eating at restaurants, (5) and avoiding public spaces, gatherings or crowds. In addition, the team also looked at risky health behaviors, including going out to a bar, club or other place where people gather; going to another person’s residence; having outside visitors such as friends, neighbors or relatives at one’s home; attending a gathering with more than 10 people, such as a party, concert or religious service; or having close contact (within six feet) with someone who doesn’t live with the respondent.

Using CNN as an example of a left-leaning news source and Fox News as a news source on the right side of the political spectrum, the study identified the relative amount of trust participants reported in either news source with the risky or positive behaviors they engaged in. Risky behaviors were highest among participants who reported more trust in Fox News, followed closely by those who reported trusting neither outlet. Positive behaviors were more frequently reported among those who trusted CNN more than Fox News.

The results imply that behavior sharply differs along media bias lines, indicating that partisan narratives are likely getting in the way of solid health messaging that encourages healthy behavior change.

“In such a highly partisan environment, false information can be easily disseminated. Health messaging, which is one of the few effective ways to slow down the spread of the virus in the absence of a vaccine, is being damaged by politically biased and economically focused narratives,” say Zhao and Wu.

Prevention today for a better tomorrow

Looking beyond the scientific unknowns or misinformation in popular media, one thing is clear, according to Crimmins and Finch: Preventing as much further infection as possible will be our best bet for staving off the worst long-term outcomes.

In addition to personal health behaviors, public policy changes and increased research support can help identify other ways to help those most at risk of infection and complications. More basic science research is needed to understand how viruses such as SARS-CoV-2 affect people of different ages and health histories, which could provide insight on how to better address COVID-19 and any future pandemics. And new policies and programs at both the local and national levels could help older people as well as people of lower socioeconomic status, who often face increased risk due to denser living conditions or more exposure to the public through their work.

“Biological factors may strongly affect how people respond to infection with COVID-19, but social rather than biological factors primarily determine the likelihood that people of different ages get infected with COVID-19, get diagnosed with the disease, and get treated in a timely fashion,” Crimmins wrote in a paper published in Public Policy & Aging Report.