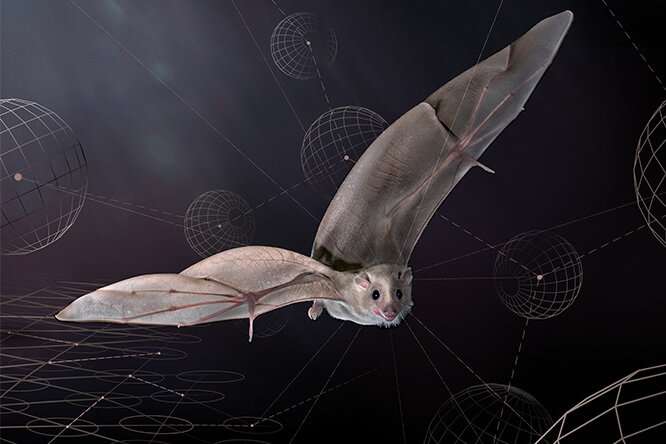 In a new study published in Nature today, Weizmann Institute of Science researchers, in collaboration with colleagues from the Hebrew University of Jerusalem, unveiled for the first time how three-dimensional space is represented in the mammalian cortex by the brain’s “GPS” system. The team of researchers, led by Prof. Nachum Ulanovsky of Weizmann’s Neurobiology Department, were surprised to find that this representation is very different from the way in which two-dimensional space is represented, turning several long-standing hypotheses on their heads.

Mammals, including humans, know their position in space, owing to several types of specialized neurons in the hippocampus and its next-door neighbor the entorhinal cortex—regions located deep inside the brain. Head-direction cells, the internal compasses of the brain, indicate to the animal the direction in which its head is turned. Place cells, thought to construct a mental map of the environment, are activated when an animal crosses a specific location. Grid cells, by contrast, respond not to one, but to multiple such locations, and they are thought to provide the brain with a GPS system of sorts.

The study of grid cells and the brain’s GPS was awarded the Nobel Prize in 2014. However, these and other studies focused solely on how two dimensions are represented and said very little about the representation of three-dimensional space. To bridge this gap, Ulanovsky and colleagues set out to elucidate how grid cells act in three dimensions in freely behaving bats.

In the past, when grid cells were studied in rodents running on two-dimensional surfaces, they were found to be activated in multiple circular areas, known as firing fields, which are arranged in a symmetrical hexagonal pattern—resembling millimeter graph paper—that tiles the surface. This unparalleled symmetry and periodicity suggest that these cells may be involved in geometric spatial computations that form the core of the cerebral GPS. The entorhinal cortex, where grid cells are located, is the brain area that is first affected in Alzheimer’s disease, and it is possible that spatial disorientation, one of the early manifestations of Alzheimer’s, is due to the grid cells’ dysfunction—and the loss of the hexagonal “millimeter paper” of grid cells. 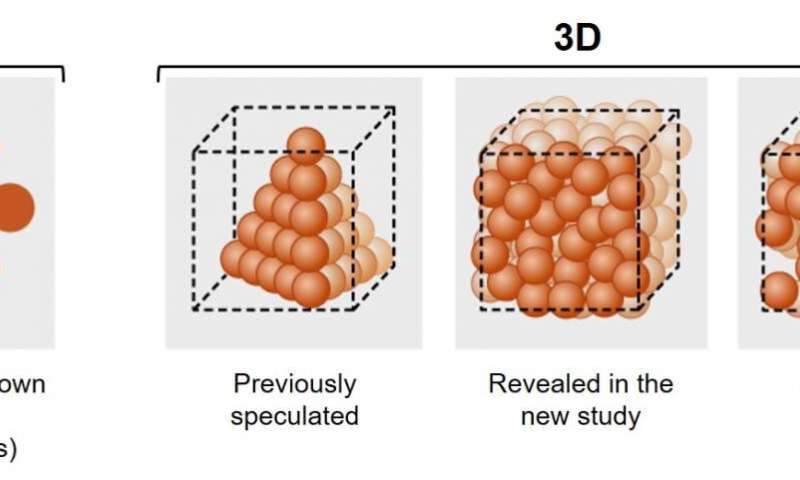 Mathematically, the optimal way to pack circles in two dimensions is in a hexagonal pattern, like a honeycomb: This is possibly the reason why the circular firing fields of grid cells are represented in the brain in a hexagonal lattice when animals walk over two-dimensional surfaces. Therefore, the researchers expected the activity pattern in three dimensions to be similarly symmetrical and hexagonal. “We and many other researchers hypothesized that we’d see hexagonally stacked balls, like oranges in a grocery store neatly stacked in a pyramid, or any other extremely ordered three-dimensional arrangement,” Ulanovsky says.

To test this hypothesis, the researchers, led by doctoral student Gily Ginosar, together with Staff Scientist Dr. Liora Las, recorded the activity of grid cells in bats that had small mobile devices mounted on their heads, as the bats were flying around a room the size of a large living room. Feeding stations at different heights ensured that each bat covered most of the room’s volume in every run. Once the data started coming in, the researchers saw that grid cells did not behave as expected when responding to three-dimensional coordinates. “The well-ordered global grid that is the hallmark of their two-dimensional activity was altogether gone,” explains Ulanovsky.

Instead, the three-dimensional firing fields of the grid cells, shaped in this case as spheres rather than circles, were packed like a box full of marbles. They were not completely disordered, but were certainly less organized than the three-dimensional equivalent of a hexagonal lattice—as the new arrangement allowed the “marbles” some extra degrees of freedom. Whereas any noticeable global order was lacking, the spheres did commit to a local order wherein the distance between one sphere and its nearest neighbors remained constant.

Compared to other longstanding theories, the new theoreitcal model was the most loyal to the experimental data.

To offer a mechanistic explanation of this phenomenon of local rather than global order, the experimental team—Ginosar, Las and Ulanovsky—collaborated with theoreticians Dr. Johnatan Aljadeff, a former postdoctoral fellow at Weizmann and now a professor at the University of California in San Diego, and Prof. Haim Sompolinsky and Prof. Yoram Burak from the Hebrew University of Jerusalem. Together they constructed a model that uses principles, borrowed from statistical physics, that describe the interaction between particles. The model revealed that the spherical firing fields of grid cells seem to interact in almost the same way as particles do—they are “attracted” to one another when at a distance and are “repelled” once they get too close. In particular, the balance of forces acting on particles could explain the local order that kept the spheres at constant local distances from one another, while avoiding any global lattice. Compared to other models that were used in the past to predict the three-dimensional organization of grid cells’ firing fields, the new model was the most loyal to the experimental data.