My reaction to being diagnosed with gestational diabetes several weeks ago was shame (as a health journalist, I thought I should know better) mixed with self-righteousness (why me? I don't eat junk?).

But, as my diabetes educator informed me, stereotypes for who gets diabetes are unfair and dated: the people she sees rarely fit the bill. 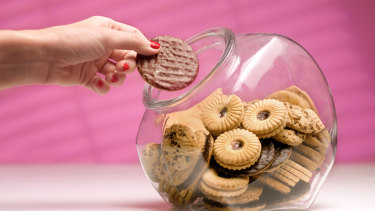 The diabetes stereotypes, including the idea that only people with a poor diet are diagnosed, are outdated.Credit:Getty

The thresholds for diagnosing gestational diabetes were controversially lowered about five years ago and they're not the only diabetes-related change to have taken place in recent years – yet current guidelines don't reflect this.

In a new editorial, published this week in the Medical Journal of Australia, the Living Evidence for Diabetes Consortium argues that many of the National Health and Medical Research Council (NHMRC) guidelines are more than five years old and the majority are “outdated”.

“The science is advancing… and that means that a guideline updated every few years is really not keeping up to date with the latest research,” says Monash University’s Dr Julian Elliott, who is also the chair of the Australian Living Evidence Consortium.

Updating guidelines more often than every three to seven years was too expensive and too time-consuming. But the ability to make real-time updates changes things.

“I think people have a pretty reasonable expectation that they should be able to find evidence summaries and guidelines that are trustworthy and up-to-date with the latest research,” he says. “As crazy as that seems that has just not been the case.”

Instead, Elliott and his colleagues are proposing a more dynamic system of living guidelines where experts keep a constant eye on new research so recommendations “can be updated and adopted rapidly”.

A three-year pilot project of living guidelines around strokes is already taking place.

“Living guidelines is the first approach that aims to deliver to society guidance that [is both] trustworthy and up to date,” Elliott explains. “This is particularly relevant for fast-moving areas, for example, COVID-19 is a great example where things are moving quickly and living guidelines would be an appropriate approach.”

While the proposed diabetes living guidelines are focused on updating recommendations to reflect advances in technology and therapeutics, Elliott says they hope to expand the approach into other areas of management, including lifestyle recommendations.

“With the other guidelines, including those concerned with lifestyle, diet … they were developed many years ago and it is not clear how 'up to date' those guidelines are,” Elliott says. “This is because the work to look systematically at research evidence has not been done, so some recommendations may not reflect the latest evidence.”

Having been down the diabetes rabbit-hole over the past few weeks, I can attest to that.

Some of the “health advice” I found, from sites run by diabetes professionals, included limitless diet soft drinks, sugar-free jelly, jam or sweets.

“An expensive market of foods labelled for use by people with diabetes also exists, with products often being no healthier, and sometimes less healthy, than regular foods,” wrote one Cambridge professor of diet and diabetes in the BMJ. “Several areas of uncertainty and controversy remain and further research is needed to resolve these.”

Mysteries, it seems, remain about both diabetes as well as the best way to treat and prevent it. This is significant given it affects about 1.7 million Australians and represents an estimated $15 billion per year in direct and indirect costs to the nation's economy.

Gestational diabetes affects up to 14 per cent of pregnant women in Australia. And although the condition's main risk factors are age (as a “geriatric” 38-year-old pregnant lady, I certainly tick that box), ethnicity (it's twice as common among Aboriginal and Torres Strait Islander mothers), pre-pregnancy weight and pregnancy weight gain, it can also occur in women with no known risk factors.

Aside from the thrice-daily thumb pricks to check my blood sugar levels and the sudden stress around what I'm eating and how that might adversely affect my baby, there have been upsides to my diagnosis.

One has been making time for daily exercise because it’s part of my “management plan”. Previously my tendency, despite being a mad exercise-lover, has been to neglect it because, well, life with a toddler, life as a working mum and life as a partner, make neglecting your needs easy.

But, along with a good excuse to focus on self-care, being diagnosed with gestational diabetes has also meant challenging my own judgments about diabetes in general. And that is a good thing because, as it turns out, much that we think we know about diabetes is due for an update.