Why some people feel aroused when they’re sick: Experts believe we may subconsciously crave sex because orgasms appear to supercharge the immune system

Sweaty sheets, hot skin, tired from head to toe…maybe some tissues lying around – is this the scene of a solo sexual encounter or a sick day?

It might be both, if you’ve ever found yourself sitting in bed on a sick day but thinking about other, much more pleasurable bedroom activities.

And you’re not alone, according to science.

Research suggests that being aroused while you have a cold is a real thing – and it might serve a purpose. 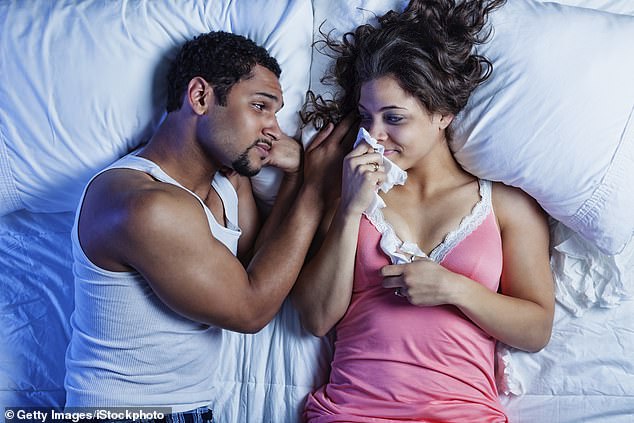 The internet is full of examples of people that feel oddly aroused when they’re sick, and case studies document a number of illnesses for which horny-ness can even be a symptom.

For example, a 28-year-old Indian woman whose husband said he ‘never noticed during eight years of married life’ her having an extreme sex drive was suddenly begging him constantly to get busy, and even having 24-hour orgasms.

Sadly, her sudden insatiable desire was actually a side effect of rabies she’d contracted after being bitten by an infected puppy.

The virus had made its way to her brain, lighting up the portions responsible for arousal before ultimately killing her.

But the relationship between your common cold and your confusing ‘come hither’ feelings is more involved and yet harder to prove.

There are a number of disparate theories linking sexual feelings and sickness.

One of the better demonstrated ones only seems to hold true for men, who supposedly can find equally good congestion relief by climaxing as they can by taking medication for the symptom.

A scientist named Sina Zarritan proposed the theory in the journal Medical Hypotheses.

Ejaculation – like any other stimulation – revs up the central nervous system.

In particular, it stimulates the sympathetic nervous system, the same part of our brain-body communication that decongestants activate in order to constrict blood vessels and tissues which, in turn, helps to alleviate congestion and let air flow more freely.

The adrenaline released during an orgasm is the theoretical agent behind this blood vessel constriction, and the blood vessels in the tissues of the nose, penis and labia all constrict and widen in the same basic way (and are all called erectile tissues).

The sympathetic nervous system gets turned on in broader ways when we do, too.

Sexual feelings and orgasm drive up the concentrations of two hormones that regulate immune responses involving cytokines and lymphocytes.

So, German scientists hypothesized that getting volunteers feeling sexy might increases their infection fighting abilities.

They recruited 11 people to bring themselves to climax and analyzed their blood before and after they had masturbated.

So it’s possible that our bodies know that some sex might be just the boost they need to get over a cold.

Or, the sensuality of sickness might serve even a more clever purpose.

There’s an evolutionary basis to the line ‘in sickness and in health’ that’s said by couples in traditional Christian weddings.

As mammals, we really do want our mates to take care of us, and never more than when we’re down and out with the crud.

And sex can help make partners really want to take care of one another.

Intercourse and orgasm trigger a dose of the hormone oxytocin in us, and that hormone is what gives us waves of that loving, cuddly, feeling that bonds us.

Its crucial to the bonding of mothers and babies, and between partners.

So it may be that when we’re sick, we subconsciously know that making love will help make sure our partners look after us while we recuperate.

Not to mention that sex and all those close cuddly feelings are a welcome distraction from feeling just pretty rough.