‘He sounded like a donkey braying’: Wife reveals she thought her husband, 43, was snoring but he was having a cardiac arrest in his sleep

A woman has revealed she thought her husband was snoring like ‘a donkey braying’ before realising he was having a cardiac arrest.

Stefan Willis, a father-of-three from London, was only 43 years old when he went to sleep on that night three years ago.

His 37-year-old wife, Jemima, was woken up by him making strange noises and, after deciding he wasn’t snoring, thought he was having a bad dream.

But when he didn’t reply to her calling his name, she instantly knew something was wrong, called an ambulance, and began CPR.

At hospital, Mrs Willis waited for her husband to wake from a five-day induced coma, as doctors told her he had suffered a stroke and minor brain damage.

Doctors are still unsure why Mr Willis, who said he was in his fittest shape ever, suffered a cardiac arrest.

But Mr Willis has since fully recovered with incredible progress and is back to his old, active self, cycling for charity. 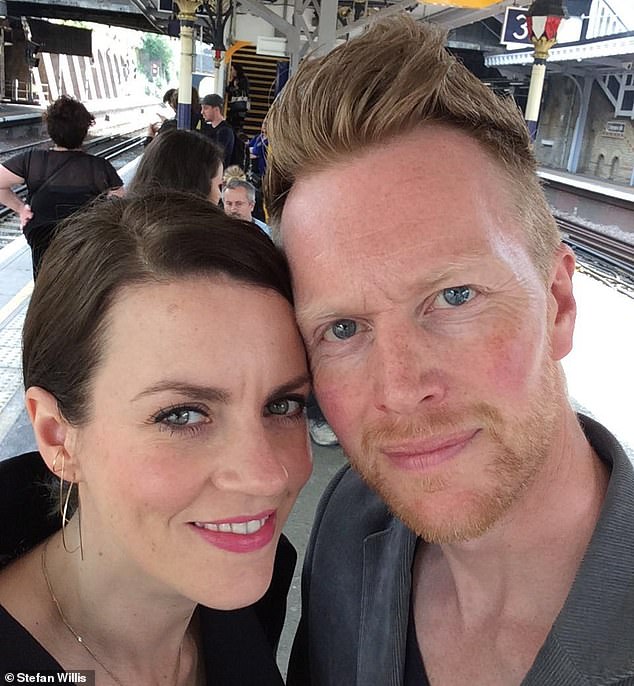 Jemima Willis thought her husband, Stefan Willis, was snoring when he began making strange noises in his sleep when he in fact was having a cardiac arrest. Mrs Willis soon realised something was wrong and phoned an ambulance. Pictured together on an unknown date 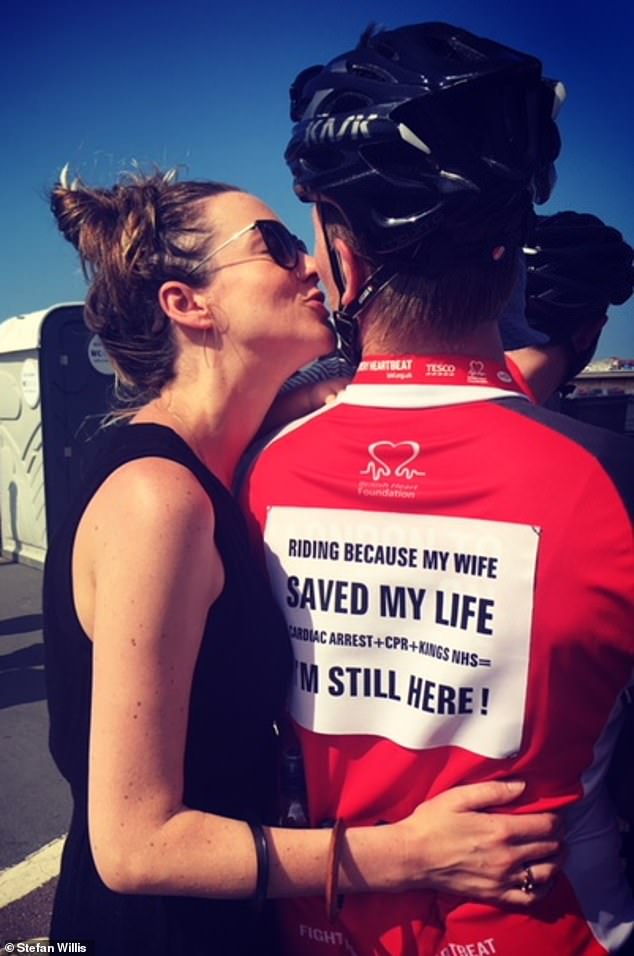 Mr Willis, pictured with Mrs Willis, will be doing the London to Brighton Bike Ride for the British Heart Foundation (BHF) this June. He had done it four times prior to suffering a cardiac arrest on October 15 2016 and was in his fittest shape yet

Mr Willis thanks his wife for his life and said: ‘Without her, I wouldn’t be here. There is no other way it could’ve gone other than death if she hadn’t been so brave.’

It had been a normal day for Mr Willis on 15 October, 2016, as he went to work as a university teacher and had spaghetti bolognese with his family for dinner, Metro reports.

At 2am, the couple’s son Beck, now four, woke up and Mrs Willis went to check up on him before going back to bed.

Mrs Willis, an art teacher, said: ‘It took me a little while to fall back to sleep but I had fallen asleep when I was woken by Stef making a really strange noise. It was about 3.15am.

A cardiac arrest occurs when the heart suddenly stops pumping blood around the body, which is usually due to a problem with electrical signals in the organ.

This causes the brain to be starved of oxygen, which results in sufferers not breathing and losing consciousness.

Cardiac arrests are different to heart attacks, with the latter occurring when blood supply to the heart muscle is cut off due to a clot in one of the coronary arteries.

Drug overdose and losing a large amount of blood can also be to blame.

Giving an electric shock through the chest wall via a defibrillator can start the heart again.

In the meantime, CPR can keep oxygen circulating around the body.

What are the signs?

There are usually no symptoms before a cardiac arrest and, without immediate treatment, it will be fatal.

If someone is in cardiac arrest they won’t be conscious, responsive or breathing normally if at all.

‘The only sound I can compare it to was a donkey braying. When he didn’t reply to me and I realised he wasn’t waking up, I turned the light on and instantly knew something was wrong.’

There are normally no signs of a cardiac arrest other than the person being unresponsive and not breathing normally, often resulting in gasping sounds.

Mrs Willis said she went into ‘survival mode’ as she ran downstairs to grab her mobile phone and call 999.

She said: ‘I think I reacted pretty quickly as the situation felt very serious. I don’t know why but I just knew something awful was happening.’

Mrs Willis performed CPR to keep her husband alive, being given instructions by the phone operator.

When the ambulance arrived, paramedics shocked Mr Willis eight times with a defibrillator to try to restart his heart.

At hospital, doctors warned Mrs Willis that they didn’t know how much brain damage had occurred as a result of the cardiac arrest, and they would have to wait and see.

Mrs Willis said: ‘The day he came round was amazing but also really scary as no one knew how much damage had happened to his body or his brain.

‘It was amazing to see him try to get off the hospital bed, as well as realising that he still remembered who I was and that he had a family.

‘Over the coming days, I felt like I was on high alert, looking for things that might be different about him.

‘I would wake throughout the night to check he was still alive, despite knowing he now has his device.’

Mr Willis was fitted with an S-ICD, a mini-defibrillator that is inserted into the chest to give the heart shocks should it go into an abnormal rhythm, protecting him from a future cardiac arrest.

Despite everything, Mr Willis was in denial about the seriousness of that night and what could have been.

He said: ‘I was still really struggling to come to terms with what had happened, I couldn’t even feel grateful for it.

‘I just wanted to get back to feeling like me as soon as possible – I didn’t fully comprehend what I had just been through.’ 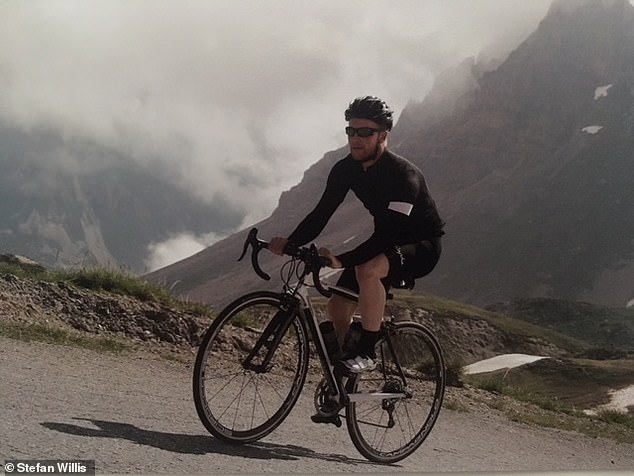 Mr Willis was in denial about his brush with death. He had been very active before that night and was desperate to get back to his usual self afterwards. Pictured, cycling

HOW TO GIVE CPR

Cardiopulmonary resuscitation (CPR) can be used to try to restart someone’s heart if it has stopped.

CPR should only be used in an emergency situation if someone is unconscious and not breathing.

People without CPR training should stick to hands-only chest compressions, the NHS says.

To carry out a chest compression:

Place the heel of your hand on the breastbone at the centre of the person’s chest. Place your other hand on top of your first hand and interlock your fingers.

Position yourself with your shoulders above your hands.

Using your body weight (not just your arms), press straight down by 5-6cm (2-2.5 inches) on their chest.

Keeping your hands on their chest, release the compression and allow the chest to return to its original position.

Repeat these compressions at a rate of 100 to 120 times per minute until an ambulance arrives or you become exhausted.

Two weeks after he left hospital, Mr Willis saw an episode of 24 hours in A&E which featured a man who went into cardiac arrest.

It finally hit Mr Willis, who is also father to Bo, 12, and Miller, one, what he and his family had been through.

He said: ‘I saw the reality of how cardiac arrests are treated. So many staff are involved, so much equipment attached to the patient and the family were in so much shock.

‘This brought it all home for me – what I had been through, my brush with death and what my poor wife, family and friends had experienced.

‘Sometimes I look at my one year old son and think; “You were so very nearly not here”. This makes me reflect on what happened but also makes me feel incredibly grateful.’

Mr Willis has no recollection of what happened that night, only that he went to sleep and woke up five days later in Kings College hospital, London.

He said: ‘I never had any health issues. There was no indication that anything was wrong with my heart so my sudden cardiac arrest was a huge shock to myself and my family.’

Cardiac arrest can be caused by almost any heart condition and can occur due to a heart attack, heart disease or heart muscle inflammation.

But for Mr Willis and his family, they are still undergoing screening and testing to discover what caused his unexpected cardiac arrest. 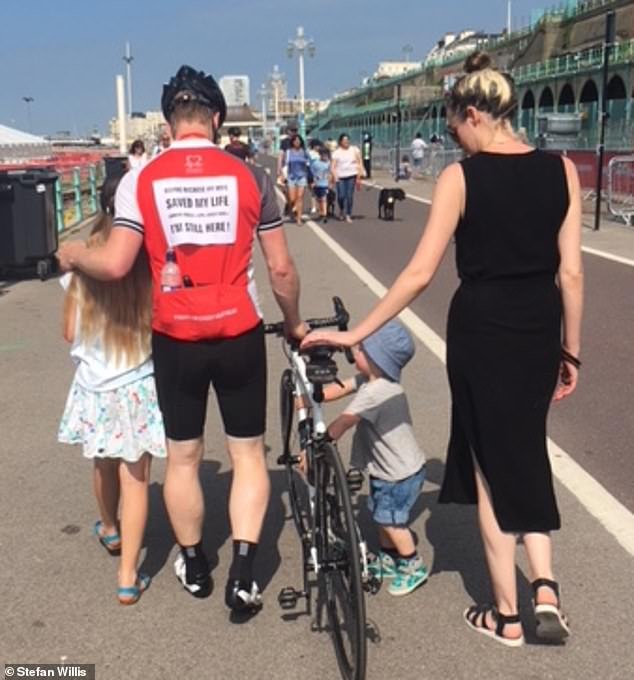 Mr Willis realised how lucky he was and thanks his wife for saving his life. The family are still undergoing screening and testing to discover what caused his unexpected cardiac arrest. Pictured together after Mr Willis took part in a charity cycling race

Before the incident, Mr Willis was a keen cyclist and was cycling over 621 miles (1,000km) a month, so he was desperate to get back onto his bike.

Only a couple of months before his cardiac arrest, he undertook a cycling challenge in the French Alps and felt the fittest he had ever been.

Mr Willis completed the London to Brighton Bike Ride for the British Heart Foundation (BHF) six months after his cardiac arrest and has taken part twice more since.

He vowed that he would be there every single year and said: ‘I had completed the London to Brighton Bike Ride four times prior to my heart stopping.’

Emma Day, organiser of the BHF London to Brighton Bike Ride said: ‘Everyone who takes part helps us to raise money for research which pioneers new breakthroughs and revolutionises treatment for the 7.4million people in the UK who are currently living with heart and circulatory diseases.

‘People like Stefan are a true inspiration and we’re incredibly grateful for his courage and determination to help us beat heartbreak forever.’

If you would like to sponsor Mr Willis for this year’s London to Brighton Bike Ride in June, please do so by visiting his JustGiving page.

If you would like to take part in the event yourself or any other of the BHF’s bike rides, you can find out more or sign up here.