Woman, 22, wrongly told she was infertile by doctors gives birth to a miracle ALBINO baby

A woman who was told she was infertile by doctors has given birth to a miracle albino baby.

Shannon Conarty, 22, of Harrogate, North Yorkshire, was given a ten per cent chance of conceiving naturally after she was diagnosed with polycystic ovary syndrome (PCOS).

The condition affects around ten per cent of women, and left Ms Conarty considering IVF.

She was shocked to discover she was expecting, after three years of trying, but failing, to get pregnant with her partner, Tom Kane, 30.

Albinism affects is estimated to effect one in 17,000 people worldwide, according to the National Institutes of Health. 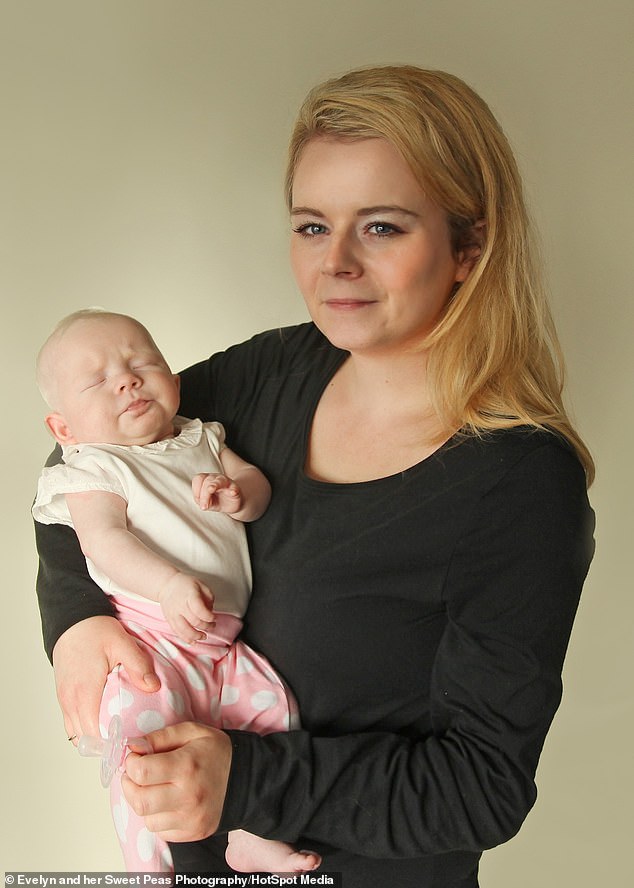 Shannon Conarty, 22, of Harrogate, North Yorkshire, gave birth to a health albino baby after doctors said she had a ten per cent chance of conceiving due to PCOS 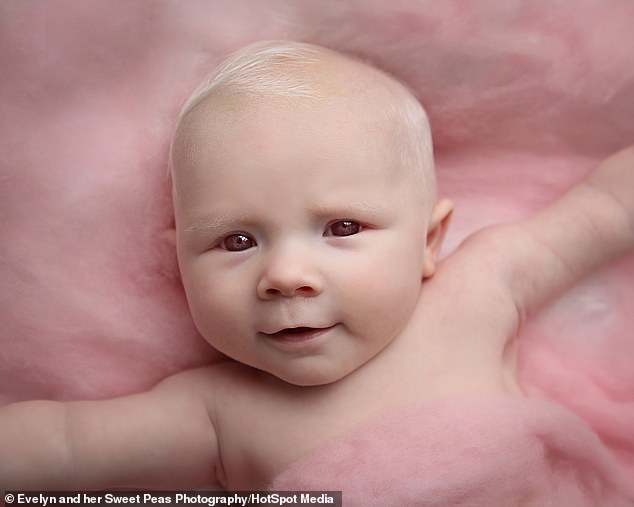 Ms Conarty said: ‘Becoming a mum has always been a dream of mine.

‘Ava feels like a little miracle, and even more so after she was diagnosed with albinism.’

In July 2011, aged 15, Ms Conarty was diagnosed with PCOS, a condition caused by an imbalance of hormones.

She said: ‘My weight fluctuated and my ovarian cysts were causing me a lot of pain.

WHAT ARE THE RISK FACTORS FOR POLYCYSTIC OVARIAN SYNDROME?

The condition is marked by chronic ovarian cysts, which are fluid-filled sacs that can form if a follicle fails to deposit an egg.

While any woman can get ovarian cysts, those with PCOS also have elevated levels of the male hormone, androgen.

Scientists do not know what causes this endocrine abnormality, but it often coincides with obesity and insulin resistance.

Yet, like many aspects of PCOS, obesity contribute to the development of PCOS, or the relationship may go in the opposite direction, such that PCOS causes weight gain.

‘At the time, doctors revealed I had a ten per cent chance of conceiving children naturally as my fallopian tubes were covered in cysts.’

Woman with PCOS often have cysts on their fallopian tubes that contain immature eggs.

The hormonal imbalance of PCOS interferes with periods and the growth and release of eggs from the ovaries, effecting the ability to conceive.

With treatment, most women with PCOS are able to get pregnant.

‘As I was still in high school at the time, I never gave it a second thought,’ Ms Conarty said.

But two years later, when Ms Conarty was 17, she met Mr Kane, an asbestos remover, through mutual friends.

She said: ‘We fell in love and when I revealed that I was unlikely to have children, Tom was understanding.

‘When I was 18, we started trying for a baby, but I never fell pregnant.

‘Every month when I got my period, I was devastated. And the thought of never having children made me feel depressed.

‘We even decided to have IVF if I didn’t conceive by the time I was 25.’ 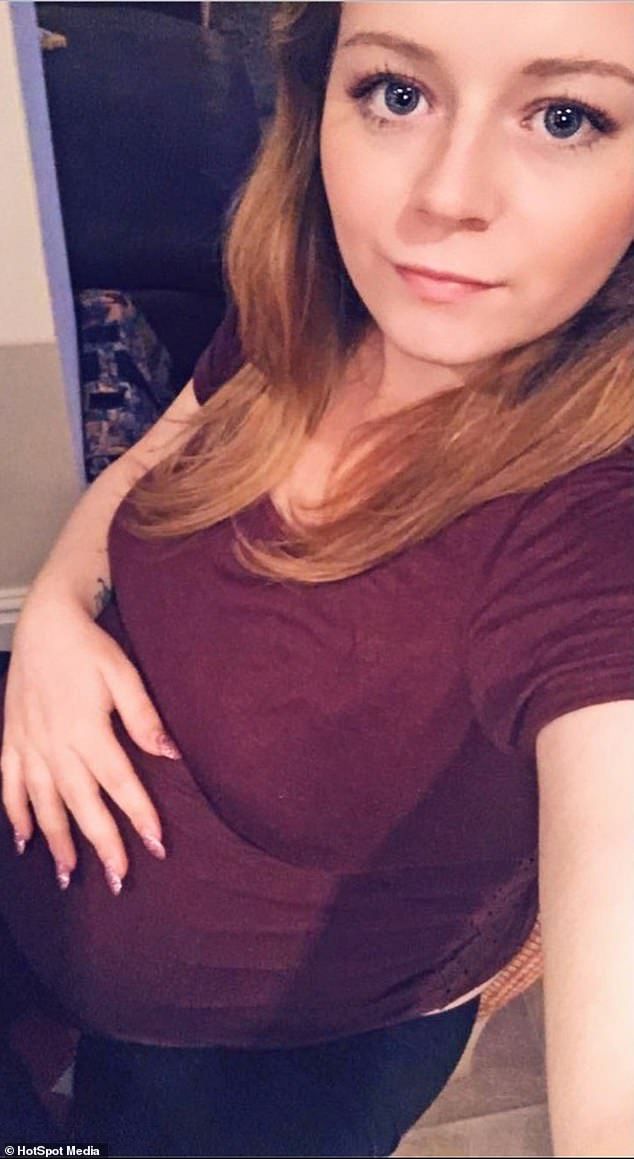 Ms Conarty, pictured during pregnancy, said her PCOS caused her weight to fluctuate, and doctors told her her fallopian tubes were ‘covered in cysts’ 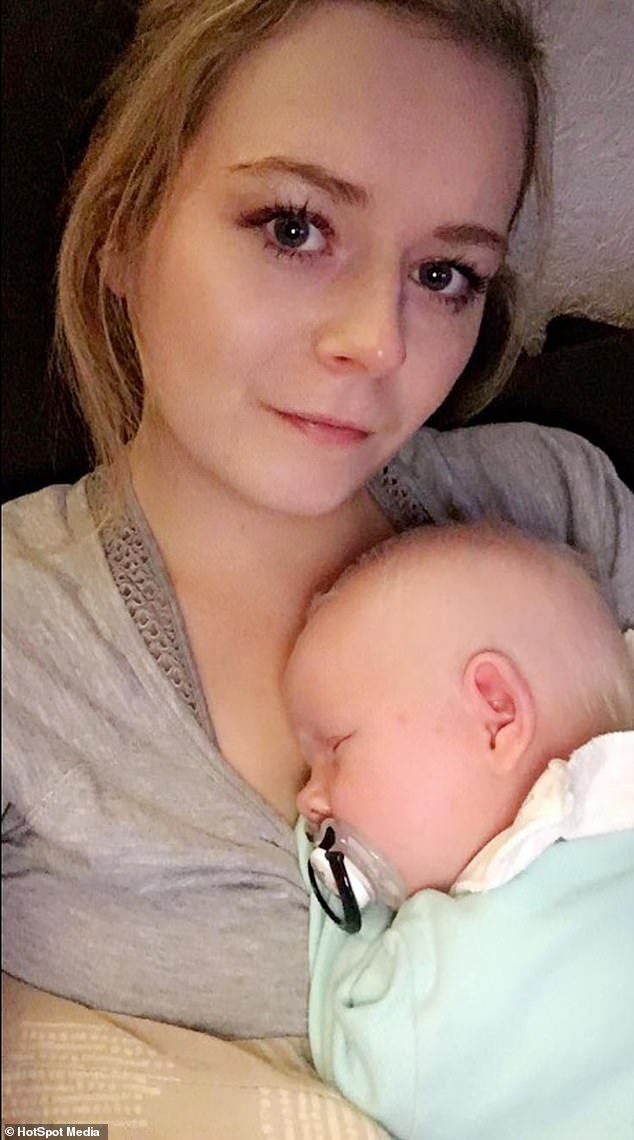 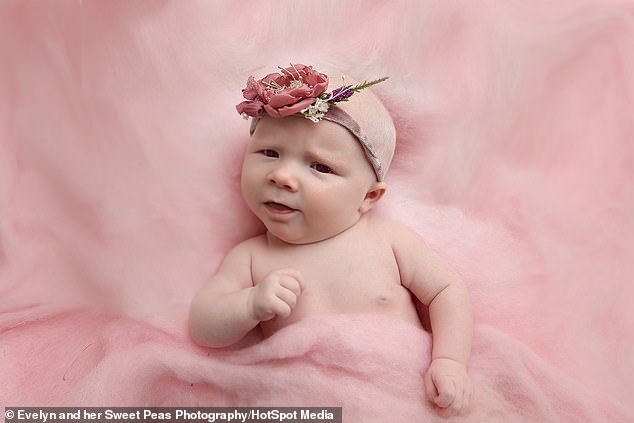 Ava is more sensitive to sunlight and she is partially-sighted – although it is not known to what extent this will affect her until she is older, her mother said

But surprisingly, three years on in January 2018, Ms Conarty discovered she was pregnant.

She said: ‘Tom and I were delighted. My pregnancy went without a hitch, but I had extra scans to monitor me.

‘When she [Ava] was born, I noticed she had red eyes and white hair, but thought nothing of it.’

At two weeks old, Ava’s health visitor was concerned about the colour of her eyes.

But Ava was to be diagnosed with albinism, which affects the production of melanin, the pigment that colours skin, hair and eyes, a month later.

The condition can also affect eyesight as melanin is involved with the development of the retina, the thin layer of cells at the back of the eye.

Albinism can affect people of all races and is genetic.

Ms Conarty said: ‘We didn’t believe it. Doctors told us it was very rare, as children get it from their parents.

‘Me and Tom are undergoing genetic testing to see which of us carries the gene.

‘Ava will always have white hair and red eyes. Her albinism makes her more sensitive to sunlight and she is partially-sighted, but we won’t know the full extent of this until she’s older.’

But her unusual eye colour draws in strangers.

Ms Conarty said: ‘Every time we leave the house, people comment how beautiful she is.  But despite the admiring remarks, I do worry about her when she gets older.

‘Due to her sight problems, she’ll be unable to drive and I worry about her being bullied at school.

‘But me and Tom will raise her to love herself as she is. After all, she’s our little miracle!’