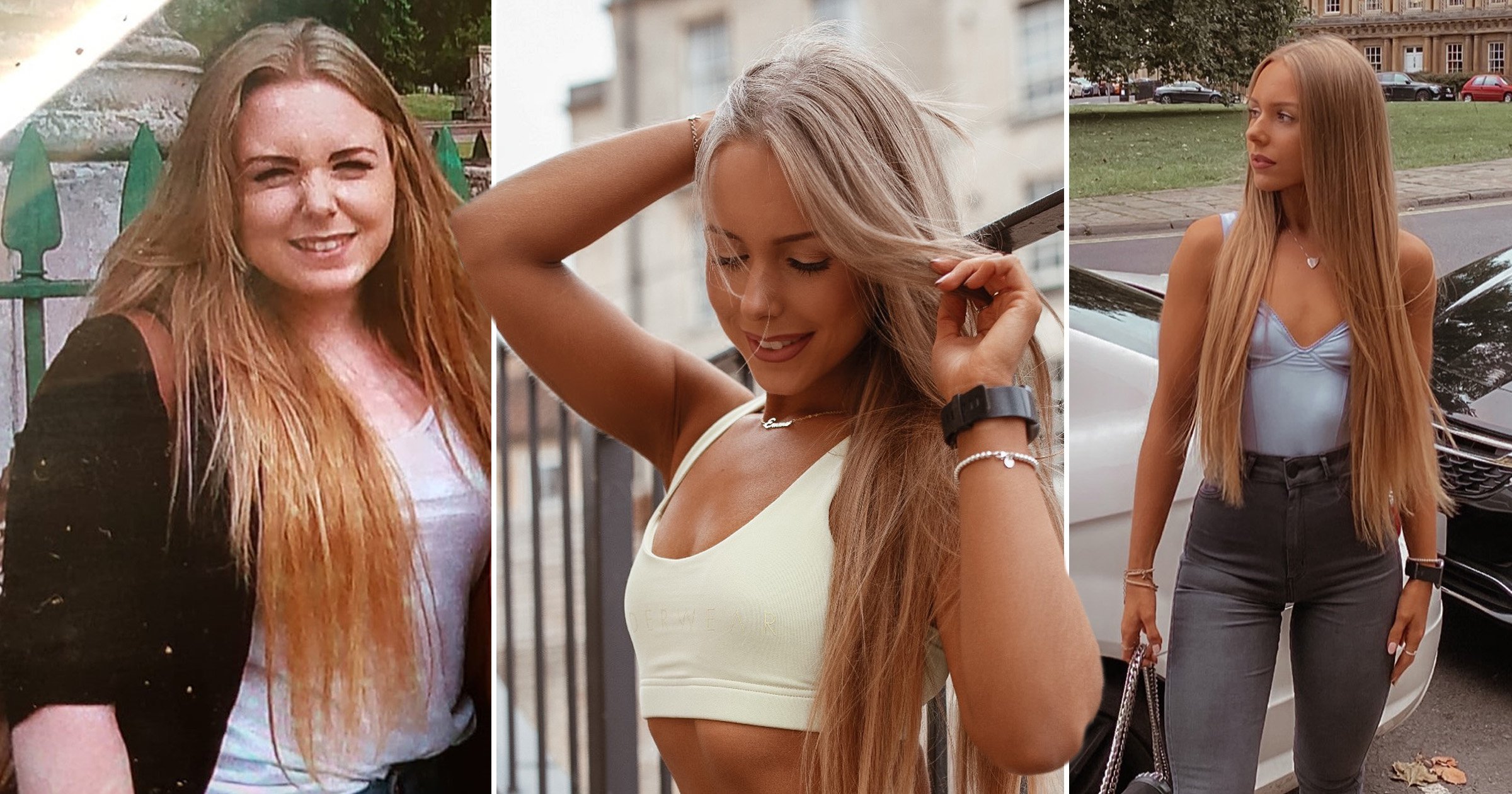 After being called a ‘whale’ by bullies as a teenager, Emma Doherty developed an eating disorder that left her anxious about eating anything ‘unhealthy’.

Now 24, the student ‘became a recluse’ after cruel taunts saw her being home-schooled in the final year of her GCSEs.

She began comfort eating while facing depression, but her relationship to food worsened in 2016 while on holiday in Mallorca.

Emma, from Bath, Somerset said: ‘I used to be extremely active, I used to be dancer. But when the bullying happened, I shut off and used food as comfort.

‘I even had girls throw food at me. It was awful and I became a recluse. I ate takeaways, ice cream and chocolate.

‘Because I hated myself, I didn’t see the point in eating healthily.

‘Then, on holiday in Mallorca with my mum and sister, I was the most depressed I’d ever been, because of how I felt about how I looked.

‘While other girls my age were in bikinis, I was all covered up in a hoodie, because I hated the way I looked.

‘So, when I came back, I joined a small gym, where I didn’t think anyone would see me. But then I became obsessed with healthy eating and diet, which was even worse.’

Emma eventually saw her fixation on food and exercise was ruining her wellbeing and having done some research, discovered her condition was called orthorexia.

Having restricted her diet immensely and doing cardio every day, she recognised something wasn’t right.

At this point, she began fighting to get well.

She said: ‘After overeating for years, I went to the opposite extreme, developing an eating disorder and going down [in weight].

‘I was skin and bone and I had a really disordered way of eating. I was actually scared of food.’

She continued: ‘I’d wanted to make a change, but I went too far. And, after I lost all the weight, I still wasn’t happy with how I looked.’

By 2019, she was ‘terrified’ by the very thought of the pizza, pasta and chocolate she had once loved.

She said: “Everyone thought losing all the weight would make me happy, but it didn’t.

‘My entire life was consumed by thoughts of calories and how skinny I was, and how I couldn’t go out and eat.

‘I had to make excuses for why I couldn’t go out for a meal with anyone. I was simply too scared to.’

As a result of her weight loss, her periods stopped for two years and she often fainted.

She said: ‘I had extreme body dysmorphia – meaning despite being thin, I’d think I looked fat.

‘Despite worrying that I wouldn’t be able to have kids, I just couldn’t stop.

‘It’s quite scary, seeing how I veered between the two polar opposites.’

At the age of 21 she also realised she need to learn to like herself in order to help with getting better – but that came with fearing she would become ‘fat again’.

On holiday in Marmaris, Turkey, in August 2019, she would cover up and worry about what she was eating – despite being at her slimmest.

She said: ‘I had the worst holiday of my life as I was so frightened of getting fat and of the food.

‘When I got back I joined another gym because I was worried people would think I was fat. I was crying thinking I’d lost all my progress.

‘At my skinniest, I still wasn’t body confident at all.’

Slowly but surely, things started to change, and now she eats well while engaging with exercise in a more balanced way.

She’s even founded her own business, Empower Training, and in 2020 began helping others who are struggling to live healthily through her work.

On Instagram, she documents her journey to recovery to help others going through their own battles.

Emma said: ‘I’m the healthiest and happiest and most body confident I’ve ever been.

‘Writing down my thoughts has made me realise how illogical things have been at times in my head.

‘I would think that eating one piece of chocolate would make me fat, but writing that down you realise that’s not going to happen.

‘Now I understand that I need more balance in life and I hope that by talking about it, I will help other people battling extremes with their diet and weight to see that too.’

If you’ve been affected by the issues raised here, visit Beat for help and advice.