A woman was diagnosed with a brain tumour after seeking help when she realised she could often smell burnt toast.

Yasmin Clapp, of Exeter, Devon, would also suffer episodes where she would start mumbling and feel chronically tired.

The now 26-year-old initially dismissed her symptoms as they were intermittent but eventually sought help when they began to persist.

Neurologists revealed Ms Clapp was having focal seizures, which can cause imaginary smells and are a sign of a brain tumour.

Ms Clapp was shocked to learn she would need an operation to remove it as well as chemotherapy to remove the cancerous tumour. 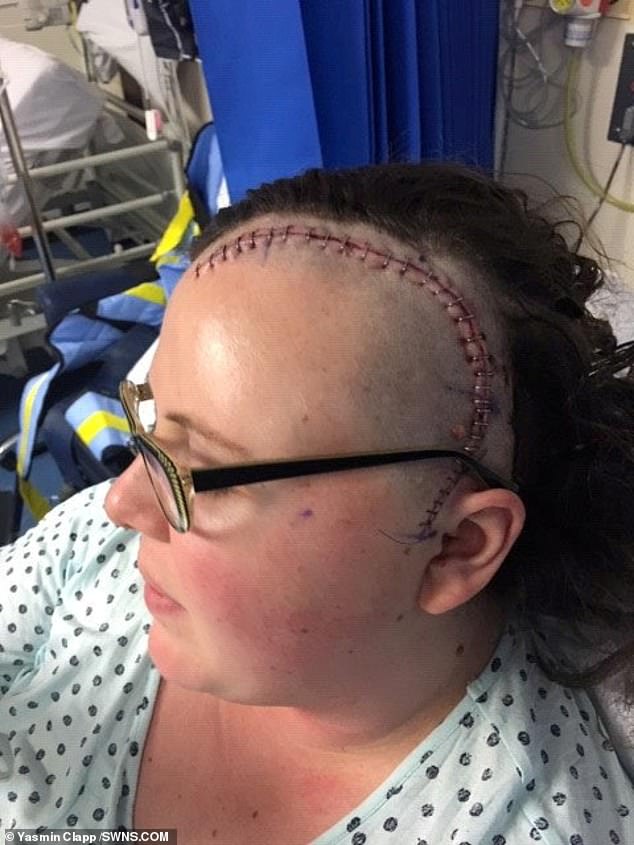 Yasmin Clapp, 26, of Exeter, she discovered she had a brain tumour after often smelling burnt toast. She required surgery to remove the tumour (pictured) 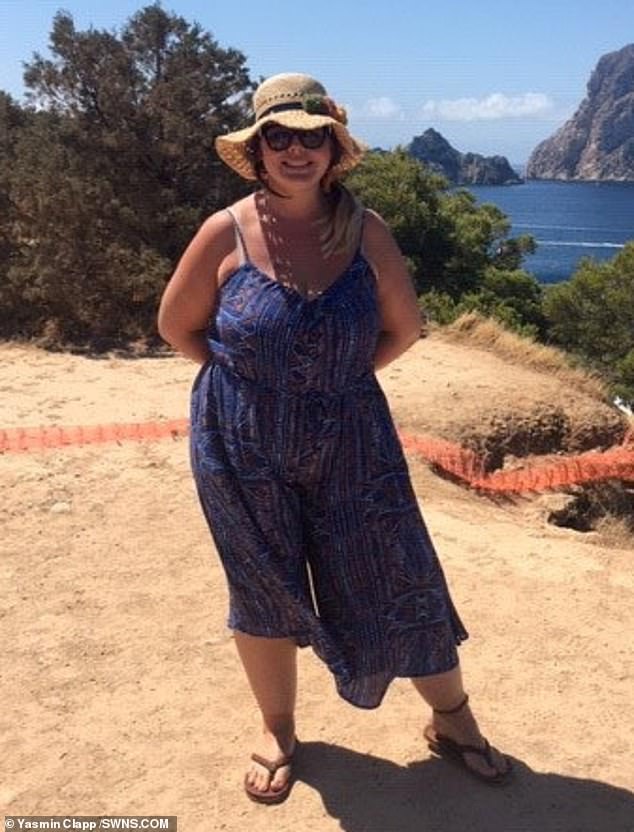 Ms Clapp would also suffer episodes where she would start mumbling and feel chronically tired, which were revealed to be seizures. She is pictured in Ibiza in August after recovering

Smelling something that isn’t there – a phenomenon known as phantosmia – can be a sign of a serious health problem.

It could be a sign of epilepsy, when a seizure occurs in a part of the brain may cause the individual to hear or see things that are not there.

Seizures are the most common first symptom leading to a brain tumour diagnosis in adults, according to The Brain Tumour Charity.

Ms Clapp said: ‘Looking back, the first time was in 2016 at work and I remember a colleague saying that I was just staring into space and mumbling.

‘I was sat there realising I could smell burning and at the same time all the voices I could hear around me, I’d heard them before – it was just like a déjà vu moment.

‘After that I couldn’t talk properly for a while and a huge wave of tiredness came over me.’

WHY DID A BRAIN TUMOUR CAUSE A SMELL OF BURNT TOAST?

Smelling burnt toast can be a sign of a brain tumour.

This may be due to the individual having seizures. A seizure that occurs in the temporal lobe of the brain may cause the individual to hear or see things that are not there, including smells, noises or even emotions.

Up to 60 per cent of brain tumour patients will experience at least one seizure, according to The Brain Tumour Charity.

A huge variety of smells have been recorded, but the most common appear to be cigarette smoke, burning rubber, chemicals and something spoiled or rotten.

The NHS states phantosmia is usually caused by an infection such as a cold, flu or sinusitis.

Less common causes involve the nervous system or the brain, such as migraines, epilepsy, mental health problems like depression or a head injury.

Treating the cause of phantosmia may help get rid of it, but sometimes it is permanent. The reason why it occurs is not clear.

Fatigue is the most common side effect of brain tumours and brain cancer, but is often overlooked as part of everyday life.

Brain tumours can also affect communication skills, causing a person to forget words, mispronounce them or put them in the wrong order.

Ms Clapp put the moment down to just a ‘strange sensation’. But in July 2017, the symptoms started happening again.

She said: ‘In September 2017 I was in the kitchen making cheese on toast and I had a moment.

‘The smell, the déjà vu and of course the toast started burning as well so I was surrounded by real and imagined smells.

‘My mum rushed in and said, “Yasmin, you’re mumbling”, so we went to the doctor and he referred me straight away to have an epilepsy test done at the Royal Devon and Exeter Hospital.’

Ms Clapp had been having focal seizures, during which a person can sometimes remain fully aware of their surroundings even if they can’t move or respond.

Ms Clapp said: ‘I had electrical wires on my head in place for two days and the whole works, but they found nothing.’

A neurologist then scheduled an MRI, originally for February 2018, but pushed for the scan to be brought forward to October 2017 after growing concerned for Ms Clapp.

It was then discovered that Ms Clapp had a brain tumour but it was believed to be benign.

She said: ‘At the time they weren’t sure that the tumours would even need surgery but then I got a call saying there was two little dots on the scan that I called “dumb and dumber”.’

The seriousness of Ms Clapp’s diagnosis had now escalated and she was told she would need surgery urgently to remove the tumour.

She had an awake craniotomy, a type of operation that requires a person to be alert while under the knife.

Ms Clapp said: ‘It’s really strange when I look back at it now. I don’t know how I did it but it went really well for me.

‘I always remember it because it was March 2 and there was a lot of snow in the south west that year.

‘A lot of appointments got cancelled but I had stayed the night before in a hotel nearby with my mum, so on the morning I was like, “yep, I’m ready!”.

‘Within two days I was out of hospital and 98 per cent of the tumours had been removed.’ 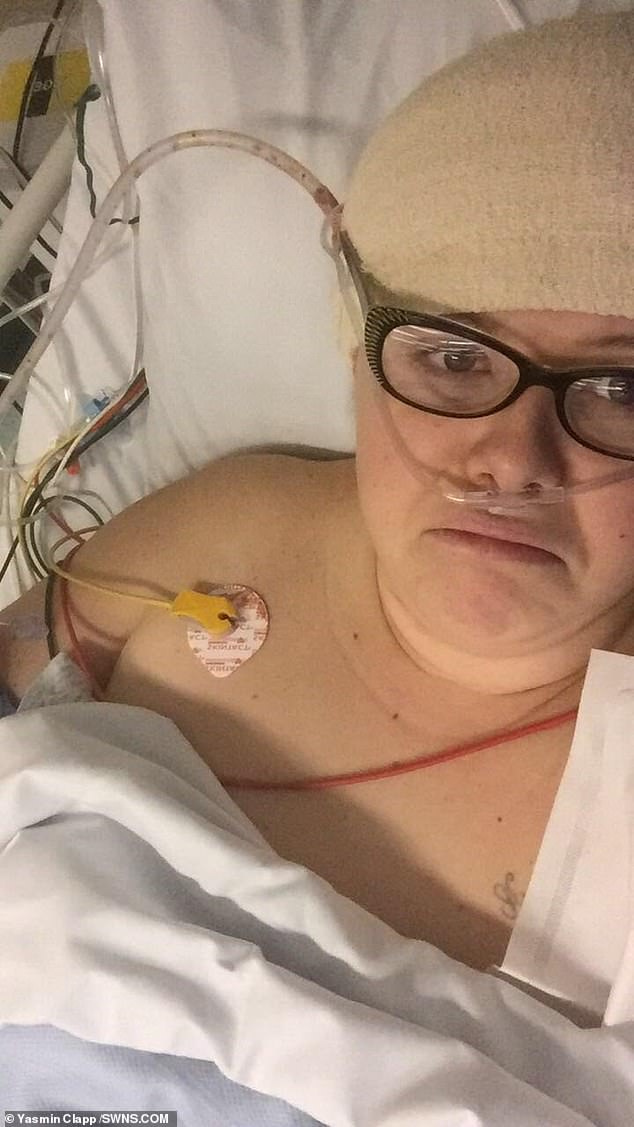 Ms Clapp initially dismissed her symptoms as they were intermittent, but eventually sought help when they began to persist. It turned out to be a life-changing diagnosis. She is pictured in hospital after her operation 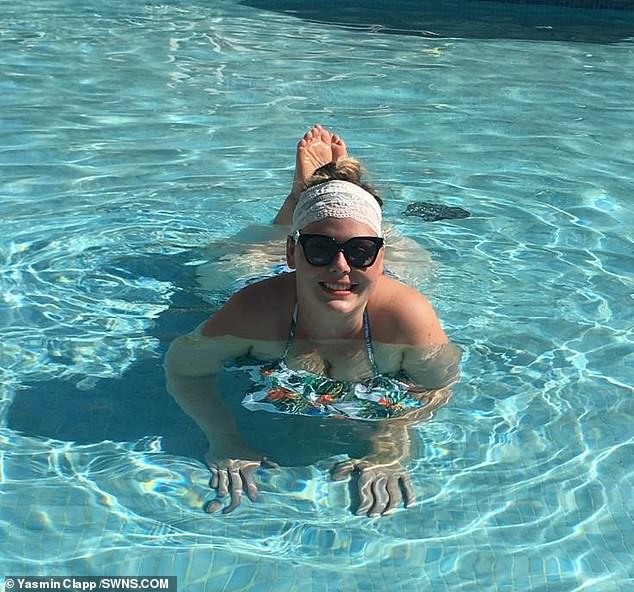 Ms Clapp had chemotherapy and radiotherapy for a cancerous growth. She is pictured in Ibiza in August

A biopsy from the craniotomy showed the tumour had a grade 4 glioblastoma, the most common high grade and cancerous primary brain tumour in adults.

Overall, Ms Clapp had a mixed-grade brain tumour – which contains a mixture of cells with different grades, and it is graded according to the highest grade of cell it contains.

They account for one per cent of brain tumours, according to The National Brain Tumour Society, and are most common among men and women in their 20s to 50s.

She was able to return to work, at a tools company, and to build up her confidence and life again within weeks.

She said: ‘I was told that without my doctor being so determined to help me, I would have been worse off if he hadn’t have helped push through my tests and diagnosis.

‘I was lucky, I had a good experience with my GP. It’s made a big difference to my life.’

Ms Clapp is one of 23 young ambassadors for The Brain Tumour Charity, raising awareness of symptoms and treatment.

The charity lead and fund the HeadSmart brain tumour awareness campaign for children and young adults.

Ms Clapp said: ‘Being part of the young ambassadors has helped me massively getting my life on track.

‘It’s given me confidence to carry on with my work and I’ve also travelled a lot since.’

Ms Clapp jetted off to Ibiza in August just a month after finishing chemotherapy and earlier in the year she sailed with the Ellen MacArthur Cancer Trust.

She said: ‘I’m doing as much as I can at the moment to push out information and to get more facilities of cancer and brain tumour patients.

‘I’m really proud of the work the Young Ambassador program, showing that you can do things, you can get back on your feet after a brain tumour.

‘For me, my story is very positive and I like to talk to people who might be on edge about what they’re facing and give them a positive approach.

‘I want to make sure people realise they’re not alone.’

CAN YOU HAVE BRAIN SURGERY WHILE AWAKE?

Awake brain surgery, also known as awake craniotomy, is a type of operation that requires a person to be alert while under the knife.

An awake craniotomy may be carried out to treat a tumour in an area of the brain that controls vision, movement or speech.

It ensures the surgeon treats the correct area of the brain while lowering the risk of damage to the region that controls language, speech and motor skills.

It can be difficult to pinpoint these areas before surgery, while an awake operation allows a surgeon to know which areas of the brain controls these functions so they can be avoided.

The procedure starts by a patient taking medication that makes them sleepy, before numbing drugs are applied to the scalp.

The doctor will then remove part of the skull to reach the brain.

During the surgery, sedative medications are stopped to allow the patient to wake up.

The patient may then be asked questions, told to move, count or identify pictures off a card.

This helps the surgeon identify and avoid ‘functional’ areas of the brain.

Some of the risks include: