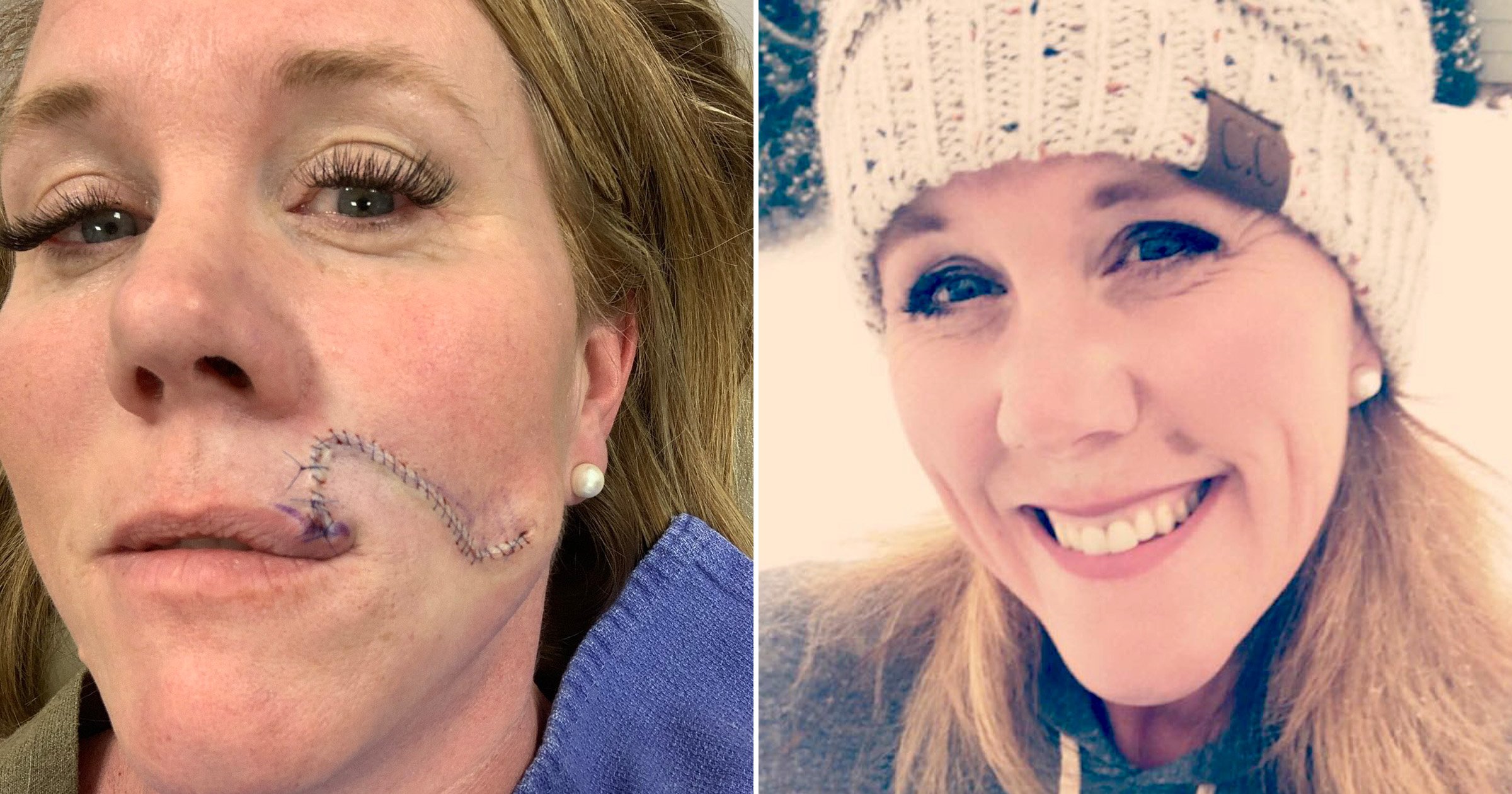 A woman has urged others to check their skin and be aware of changes after the ‘beauty mark’ near her lip turned out to be skin cancer.

Andrea Moser, 49, from Montana, US, had always believed the flat brown mark above her lip was simply a beauty mark

However, in January 2020, she noticed it was growing, getting darker and looked irregular.

At a routine check-up, she asked her GP to take a closer look but the doctor said it was nothing to worry about.

When Andrea saw someone on Instagram getting a skin check she decided to do the same and visited a dermatologist for a second opinion.

They immediately found several areas of concern – including the mark above her lip.

A biopsy was taken and discovered that a spot on her back was actually squamous cell skin cancer. At the same time, doctors also believed the mark on her lip was at a pre-cancerous stage.

‘When they told me I had a few spots but they didn’t think it was cancerous, I was just so glad that I had gone in,’ Andrea says. ‘Being fair skinned, it was always in the back of my mind that it could be a possibility.

‘My mum was pretty worried because she has had some spots removed as well.’

While Andrea was concerned, she was relieved that the spots were a more common form of cancer and could be treated.

In March 2020, she underwent a procedure to remove the spot on her back and the mole above her lip. Doctors needed to make a large incision to cover the area surrounding the mole.

‘They essentially burned [the hole on my back] off and it scabbed up,’ she explains.

‘But they wanted to make sure they got the entire spot above my lip, so that was more invasive. They had to cut the entire mole out and make a large incision along my smile line to pull the skin back up and make sure it didn’t look like I had a hole above my lip.

‘I didn’t know how big it would be going into it, but thankfully I had an amazing surgeon who did a wonderful job.’

After removal, the mole was tested and found to be melanoma which is a a serious form of skin cancer.

‘I was a little shocked,’ Andrea recalls.

‘I always thought that would never happen to me. Luckily, doctors were confident they had removed the entire mole and that the melanoma had not spread.

‘After the surgery it was hard to get used to the big incision but thankfully it has healed much better than I expected over the last 6 months. My smile is a little different now but also a reminder that I was able to overcome this and the melanoma didn’t win!’

Since the removal, Andrea has check-ups every three months which have all been clear. She is now more aware of her skin and its changes.

‘I use a mineral based SPF lotion everyday now – even in the winter – and have totally changed my skin care routine,’ she says.

As she looks back on old pictures now, Andrea can see the mark steadily growing in size from as far back as 2009.

After the scare, Andrea shared her story on Instagram to warn other people to have regular skin checks. Thousands of people liked the post, with users commenting that they would be getting checked as a result.

One person wrote: ‘Thank you for sharing this post. After some other procedure I’m getting done, I’m going to get a spot checked on my face. It looks a lot like the picture.’

Andrea now advises people to get checked regularly and wear SPF every day.

‘I spent a lot of years not caring about it and I was hoping by sharing it would help other people to get checked before it’s too late,’ she explains.

’I heard lots of stories from people that decided to get checked so that made me happy. Some found nothing but others did find stuff and were able to get it taken care of.’