Women who shave or wax their pubic hair are more likely to suffer long-term pain around their genitals, according to scientists.

Wearing tight trousers may also increase a woman’s risk of vulvodynia, a long-term, unexplained pain in the vulva – the external parts of the genitals.

Experts suggest being hairless, which they said is becoming more common, leaves the skin more exposed to friction which can lead to swelling ‘complications’.

And wearing tight clothes could make women more likely to develop infections like thrush or bacterial vaginosis, which are linked to the pain condition. 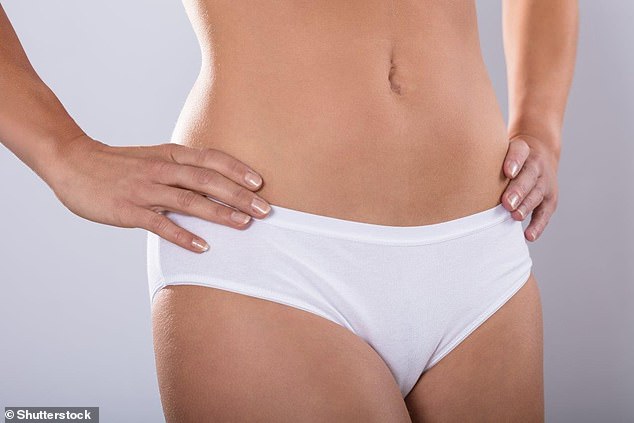 Women who remove all their public hair are 74 per cent more likely to suffer from the hard-to-treat vulva pain condition, vulvodynia, according to researchers (stock image)

Scientists at Boston University surveyed 434 women between the ages of 18 and 40.

Around half of them suffered from pain in the vulva, and all were asked about their clothing and grooming habits.

Women who removed all the hair from their genitals were 74 per cent more likely to have vulvodynia than those who only groomed their bikini line.

And wearing tight-fitting jeans or trousers for four or more days per week or could double the risk of the nerve pain condition.

‘With an increase in the prevalence of pubic hair removal directly from the vulvar region, particularly in adolescent girls, the microabrasions to this sensitive area may predispose young women to immune-inflammatory complications,’ said researcher Dr Bernard Harlow.

Vulvodynia is a chronic (long-term) pain condition which causes women discomfort in and around their vulva.

The vulva is the genitals which are visible on the outside – including the labia and clitoris.

Vulvodynia, according to the National Vulvodynia Association in the US, could affect as many as one in six women.

It can cause a stinging, burning or sore sensation which may get worse when the skin is touched or the woman sits down.

Possible triggers for the pain include nerve damage caused by childbirth or surgery, a trapped nerve, or persistent infections.

The condition is unlikely to improve on its own and treatment may involve taking painkillers, gels and lubricants, physiotherapy or cognitive behavioural therapy.

Vulvodynia is not contagious, not a sign of poor hygiene, and not linked to cancer.

Microabrasions are small breaks in the skin which could be caused by the hair removal itself – shaving or waxing, for example – or by friction from elsewhere.

Dr Harlow added: ‘Likewise, tight-fitting jeans or pants can create an environment that fosters genital tract infections, which have been shown to be associated with vulvar pain onset.’

Vulvodynia is usually an ongoing pain in and around the vulva, which isn’t cause by anything obvious or visible.

The pain can be a burning or stinging sensation, and may get worse when touched or while sitting down.

Its causes are not well known but it’s believed to be nerve pain which may be triggered by damage from surgery or childbirth, for example, or a trapped nerve.

The NHS also suggests long-term thrush infections could cause the pain.

According to the National Vulvodynia Association in the US, the condition may affect as many as one in six women (16 per cent).

Women who removed all their pubic hair at least once a week were almost twice as likely to have vulvodynia than those who groomed only their bikini line less than once a month, the research found.

Of the women involved in the study, 213 suffered from discomfort in the vulva, while the remaining 221 did not.

The research was published in the Journal of Lower Genital Tract Disease.