It’s often assumed that a person with post-traumatic stress disorder is a survivor of military combat, rape or some other form of horrific violence — and in plenty of cases, this is true. In fact, PTSD was first added to the Diagnostic and Statistical Manual of Mental Disorders in 1980 when doctors observed that Vietnam War veterans exhibited symptoms of the illness.

Today, it’s known that approximately 7.8 percent of Americans (and 10.4 percent of women) will develop PTSD at some point in their lives according to the Nebraska Department of Veterans’ Affairs. Because trauma comes in many forms, it’s entirely possible to have PTSD without a history of being violently attacked. According to the Black Women’s Health Imperative, Black Americans are statistically more likely (9.1 percent) than non-hispanic white Americans (6.8 percent) to be diagnosed with PTSD and repeated exposures to racism can increase a person’s risk of developing PTSD.

Without treatment, this illness can become debilitating and make it extremely difficult to live your life. John Hamilton, a licensed therapist and chief clinical outreach officer at Mountainside Treatment Center, tells SheKnows that PTSD is characterized by the following clusters of symptoms:

Living with these symptoms is just as difficult as it sounds, and they can be caused by a wide variety of traumatic events — not just a violent attack. “Many other situations meet criteria for a traumatic exposure,” Dr. Brian Doane, licensed psychologist at Tampa Bay Counseling Services, tells SheKnows, citing examples such as surviving a dangerous earthquake or hurricane, being in a serious car accident or going through a surgery that has a high risk of death.

“In general, someone needs to be exposed to an event that threatens bodily harm, but they don’t need to witness it directly,” Doane explains. For example, he says that a person can develop PTSD after learning that a family member or friend was killed in a violent way. “Even though this person didn’t see the death occur, learning of a violent or unexpected death of a loved one can cause many problematic symptoms to develop.”

Bianca L. Rodriguez, a licensed therapist, tells SheKnows that medical trauma, especially when it occurs in childhood, is often overlooked when PTSD is discussed. “Being hospitalized, separated from one’s parents and not understanding what’s going on can be very frightening and experienced as a threat to one’s life and well-being,” Rodriguez explains. Children who suffer from severe asthma may also develop PTSD — Rodriguez says they often report memories of feeling like they’re drowning and are going to die.

PTSD is a complex illness, and it’s accompanied by other myths and misconceptions. It can’t be diagnosed until a month after trauma occurs — but Doane says many people don’t know that sometimes the symptoms emerge much later. He says it’s fairly common for people to believe that because they were fine for years, their symptoms don’t mean they have PTSD. There are a few theories as to why this delay occurs, and he says that a prominent one is that, if the survivor isn’t in a place to safely heal, his or her body attempts to protect itself.

“For example, if a child is being abused by a family member in the house and opening up about the abuse would put the child at greater risk, the body may protect itself by storing the memories in a fragmented pattern,” Doane says. “These fragments in isolation are not as overwhelming and allow the person to focus on basic survival.”

This serves as an effective defense mechanism until the survivor reaches a point in their life when they can safely process what happened to them, he notes. At this point, it’s common for the memories to resurface with more clarity — and they’re often accompanied by PTSD symptoms, such as nightmares, flashbacks, anxiety and avoidance.

Another incredibly damaging myth about PTSD is that it’s developed by people who simply aren’t strong enough to handle trauma. “This one is especially awful because it associates shame with something that’s often already inappropriately linked with shame and guilt,” Doane explains. He points out that many sexual assault survivors are already unfairly shamed and peppered with victim-blaming questions like, “Were you drinking?” and “What stopped you from leaving?”

“So if that person also believes that symptoms of PTSD are a result of being weak, their agency and confidence that they can get better — or are even worthy of getting better — can dramatically reduce,” Doane says. As a result, they may not seek treatment.

Not seeking help or treatment is already a problem among people with PTSD because, Doane says, they often mistakenly believe that there’s nothing anyone can do and they simply need to figure it out for themselves.

“I suspect this is probably the biggest reason why people who are suffering don’t seek help,” he says. “[But] many people suffering from PTSD can and do get better. It’s not about changing the memory or forgetting, but managing the symptoms and eventually learning to be OK with yourself.”

According to a study published in American Family Physician, people who get treatment for PTSD experience symptoms for a shorter period of time (three years) than those who don’t (over five years). So, although the path to recovery isn’t always easy, it’s more than worth it to get help. If you think that you or a loved one may be suffering from PTSD, it’s crucial to remember that the trauma is valid; it’s not a sign of weakness, and it’s completely possible to recover and have a happier, healthier life.

If you or someone you know is feeling suicidal, you can call the National Suicide Prevention Lifeline at 1-800-273-8255.

A version of this story was published June 2018. 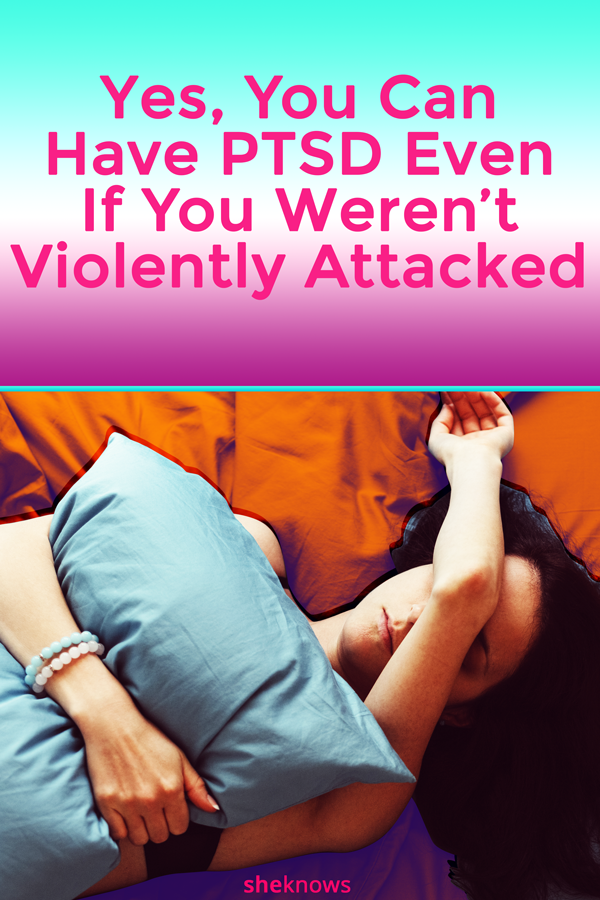