Adding yoga to a regular exercise routine can reduce the risk of heart disease, according to new research.

The study reveals that the discipline, which originated in ancient India, is much more than just muscle stretching.

Studies continue to highlight the benefits of yoga, with another this month suggesting the exercise can lower blood sugar in diabetics. 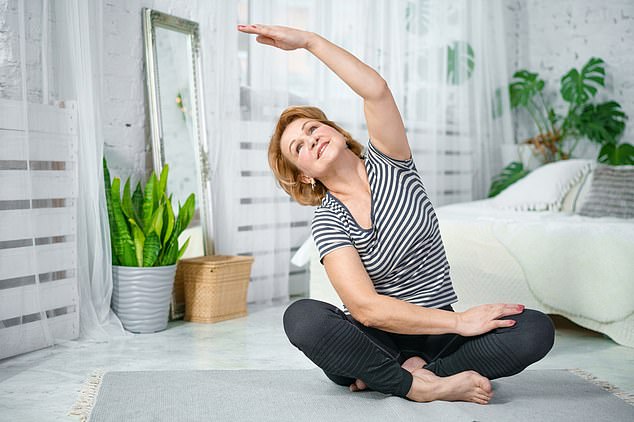 In the paper — published today in the Canadian Journal of Cardiology — researchers recruited 60 people.

The participants were split into two groups, with half asked to do structured yoga while the rest did only stretching five times a week.

All participants were also asked to do half an hour of aerobic exercise five times a week, such as running, cycling or swimming.

Researchers at the University of Southern California reviewed data from dozens of randomized controlled trials held worldwide for the past 30 years.

The studies included people with type 2 diabetes who also used mind-body wellness techniques along with their medication.

They found meditative practices as a whole increased decreased levels by 0.8 per cent — but yoga was even more effective at 1 per cent.

This is comparable to the most popular type of diabetes drug metformin, taken by around 14 million Americans and 850,000 Britons.

Scientists measured their blood pressure, heart rates and the risk of cardiovascular disease when the study began and three months later.

Both groups saw a decline in these factors.

But those who did yoga saw a larger dip in systolic blood pressure — or the pressure exerted on artery walls during each heartbeat.

No difference in diastolic blood pressure was observed.

‘Our study shows that structured yoga practices can be a healthier addition to aerobic exercise than simply muscle stretching,’ said Dr Paul Poirier, a cardiologist at Laval University in Quebec.

‘As observed in several studies, we recommend that patients try to find exercise and stress relief for the management of hypertension and cardiovascular disease in whatever form they find most appealing.’

It was not clear why people who did yoga saw improvements than those who only did stretching.

But this may be linked to the fact yoga also teaches controlling breathing, compared to stretching which is focused on loosening muscles.

The study was carried out on a small sample size of just 60 people, which may have affected the results.