You CAN have a pregnancy straight after a stillbirth: Researchers find there is no higher risk of suffering the heartbreak of another

Women are safe to have a pregnancy soon after a stillbirth without tragic outcomes, research has found.

Some studies have suggested to wait a year or more following a stillbirth to avoid further complications or the heartbreak of enduring another.

However, in one of the largest known international studies to investigate the issue, it does not appear to be a concern.

The findings, published in the Lancet, are reassuring for women who are in fear they will have a premature birth or stillborn again.

Expectant mothers are usually monitored closely if they have previously had a stillbirth, as studies have shown they are at an increased risk of another. 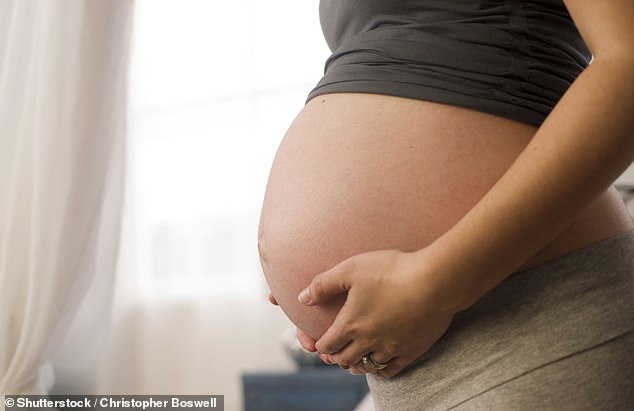 Women are safe to have a pregnancy soon after a stillbirth without tragic outcomes, research published in the Lancet has found

A stillbirth is when a baby is born deceased after 24 weeks of pregnancy, and is more common than many people believe, the NHS states.

There are more than 3,200 stillbirths every year in the UK, and one in every 225 births ends in a stillbirth.

Numbers have been declining – 2017 had the lowest stillbirth rate in the UK since recording began – but many countries, such as Croatia, Poland and Czech Republic, all have better stillbirth rates than UK.

Researchers at Curtin University, Australia said the time between pregnancies has been identified as a potential risk factor for adverse birth outcomes.

Charities say that making the decision to try again for another baby after a stillbirth is a personal one that must take emotions into consideration.

The researchers looked at the birth records of 14,452 women who had previously had a stillbirth – which was defined as a baby’s death after 22 weeks’ pregnancy – in Western Australia, Finland and Norway between 1980 and 2016.

Sixty-three per cent of women conceived within 12 months and this was not associated with increased risk of another stillbirth, preterm birth or small baby compared to women who left two or more years between pregnancies.

The study found those who conceived within 12 months of stillbirth were no more likely to have another stillbirth, or a preterm birth, than women who left two or more years between pregnancies,

Senior author Dr Gavin Pereira said: ‘The World Health Organisation recommends waiting at least two years following live birth, and at least six months following spontaneous or induced abortion to reduce the risk of adverse birth outcomes in the following pregnancy, but there is no recommendation for the waiting time following a stillbirth.

Dr Annette Regan, lead author, said: ‘We were able to demonstrate that conception of the next child within 12 months after a stillbirth was not associated with an increased risk of adverse pregnancy outcomes.

‘The research may have important implications for families who have experienced a stillbirth.

Existing studies have suggested that less than six months between a stillbirth and pregnancy is associated with a nearly two-fold increase in the odds of preterm birth, low birth weight compared with longer intervals.

As well as this, a 2015 study including over three million from The University of Aberdeen found that women who had had a previous stillbirth were more than four times more likely to have another than women who had not.

Manchester University’s Professor Alex Heazell, spokesman for Tommy’s stillbirth charity and the Royal College of Obstetrics and Gynaecology, said to the BBC: ‘As long as they [women] get all the information about why their baby died, then the choice of when to have another baby is down to when they are psychologically ready.

According to him there is no physiological reason to wait more than a year before trying for another baby, but said: ‘Stress may exacerbate things and so waiting until that goes may be a reason for some to hold off.’

WHAT IS A STILLBIRTH?

A stillbirth occurs when a baby is born dead after 24 weeks of pregnancy.

If a baby dies before 24 weeks of pregnancy, it is known as a miscarriage.

Not all stillbirths can be prevented, however, not smoking or drinking, as well as not sleeping on your back and attending all antenatal appointments can reduce the risk.

What are the signs?

Signs may include the baby not moving as much as normal.

Pregnant women should contact their doctor immediately if they notice a difference to their baby’s movement.

What are the causes?

Stillbirths do not always have an obvious cause but may occur due to complications with the placenta or a birth defect.

They are also more likely to occur if women suffer from high blood pressure, diabetes or an infection that affects the baby, such as flu.

Stillbirths are more likely to occur if women are having twins or multiple pregnancies, are overweight, smoke, are over 35 or have a pre-existing condition, such as epilepsy.

What happens after a stillbirth?

If a baby has died, women may wait for their labour to start naturally or they may be induced if their health is at risk.

Bereavement support groups are available to parents who have suffered stillbirths.

Some find it helpful to name their baby or take pictures with them.