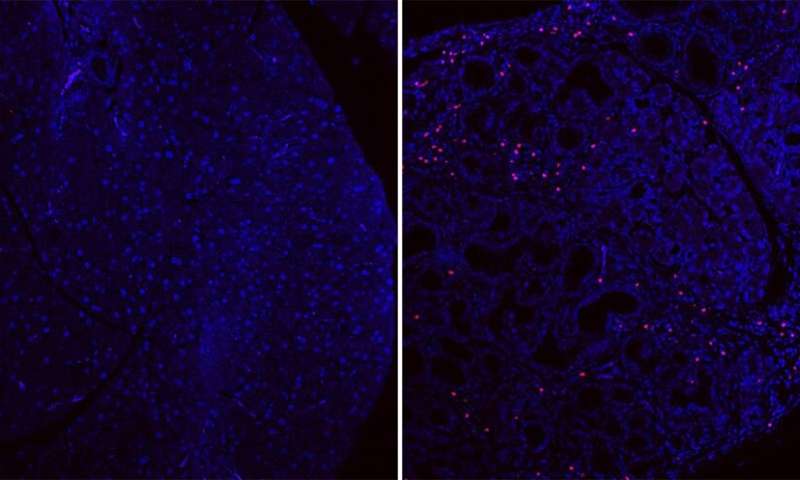 Certain fungi move from the gut to the pancreas, expand their population more than a thousand-fold, and encourage pancreatic cancer growth, a new study finds.

Published online in Nature October 2, the study is the first to offer strong evidence that the mycobiome—the local mix of fungal species in the pancreas—can trigger changes that turn normal cells turn into pancreatic ductal adenocarcinoma or PDA. This form of cancer is usually deadly within two years.

Conducted in mice and in patients with pancreatic cancer, the study found that fungal species travel into the pancreas up the pancreatic duct, a tube through which digestive juices drain in the opposite direction into the intestines. The study authors say this exchange results in abnormal fungal populations in both the gut and pancreas in the presence of PDA.

Led by researchers from the NYU School of Medicine and the NYU College of Dentistry, the study also found that treating mice with a potent antifungal drug reduced their PDA tumor weight over the 30 weeks by 20 to 40 percent.

“While past studies from our group have shown that bacteria travel from the gut to the pancreas, our new study is the first to confirm that fungi too make that trip, and that related fungal population changes promote tumor inception and growth,” says senior study co-author George Miller, MD, co-leader of the Tumor Immunology Research Program at Perlmutter Cancer Center at NYU Langone Health.

While viruses, bacteria and parasites are recognized by the American Cancer Society as causal factors in the disease, say the study authors, no previous study had linked fungi to pancreatic cancer.

To determine whether the mycobiome is reprogrammed as normal cells become cancerous (oncogenesis), the team performed analyses over 30 weeks of fecal samples from mice with and without pancreatic cancer. Researchers used genomic and statistical techniques to identify and count the fungal species present. They also attached glowing proteins to fungi to track their migrations through the gut and pancreas.

By the end of study period, the researchers observed significant differences in the size and composition of the fungal population in the cancerous pancreas when compared to the healthy organ. The largest population increase in both mice and in human tissues was seen in the genus Malassezia, which includes 14 species. The team also detected abnormally higher numbers in the genera Parastagonospora, Saccharomyces, and Septoriella.

“We have long known that Malassezia fungi—generally found on the skin and scalp— are responsible for dandruff and some forms of eczema, but recent studies have also linked them to skin and colorectal cancer,” says senior co-author Deepak Saxena, Ph.D., professor of Basic Science and Craniofacial Biology at NYU College of Dentistry. “Our new findings add evidence that Malassezia is abundant in pancreatic tumors as well.”

To test the effect of changing fungal populations on cancer growth, the team treated the mice with amphotericin B, a strong, wide-spectrum antifungal drug. Along with reducing tumor weight, antifungal treatment also reduced the occurrence of ductal dysplasia, an early cellular step toward pancreatic cancer, by 20 to 30 percent.

After the pancreases of the mice had been mostly cleared of fungi by drug treatment, the team them examined the effect on cancer growth if only certain species were allowed to repopulate the organ. They found that cancer grew 20 percent faster in the pancreases of mice repopulated with Malassezia – but not in the presence of other oft-occurring fungal species.

The study results argue that fungi increase cancer risk by activating an ancient, first-responder part of the immune system, the complement cascade. Such mechanisms fight infections, but also trigger the healing process (cell growth) as infections wane. Along these lines, complement has been shown by past studies to encourage aggressive tissue growth (cancer) when combined with genetic flaws.