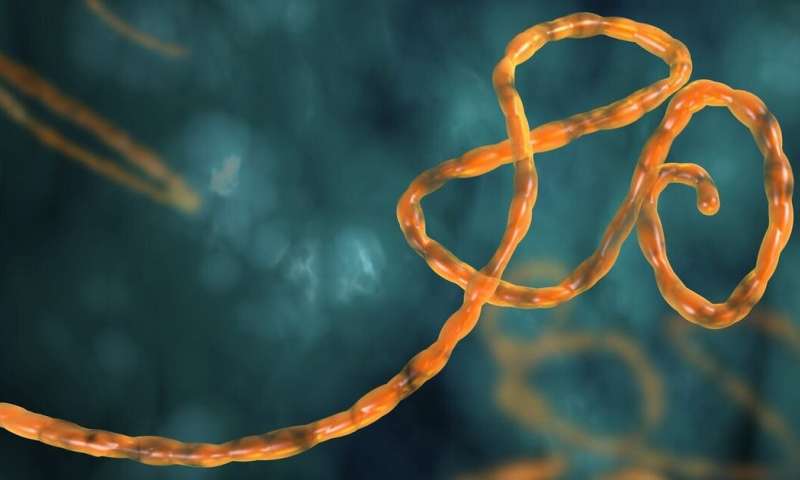 The Ebola virus outbreak of 2014 in West Africa caused more than 11,000 deaths. At the time, scientists were working on several experimental vaccines and treatments but none were licensed for use in humans.

Antibodies, which are special defence proteins made by our body in response to infection or vaccination, are one of the treatments that were investigated. Once the best antibodies for fighting a disease have been identified, they can be made in bulk and used as a treatment.

Our latest research, published in Cell Reports, shows that antibodies isolated from volunteers who had been given an experimental Ebola vaccine were effective at defeating the virus in six guinea pigs.

In all, 82 antibodies were derived from the blood cells of eleven people given the vaccine. These were combined into three separate groups, with each group containing three or four antibodies with different properties. One combination of antibodies successfully cured all six animals infected with the Ebola virus when it was administered three days after the start of the infection.

Vaccines can have side effects, so for people with immune system disorders, older people and pregnant women, antibodies are a safer form of treatment. Antibodies can be isolated from human blood by selecting individual B cells – the specialised immune cells that secrete antibodies. The genetic code for making an antibody is inside the B cells, which is extracted using advanced molecular techniques. Once this code is known, huge quantities of the antibody can be made in a lab.

Antibodies attach to viruses and prevent them from entering cells. Each antibody has different properties, such as how and where it binds to the virus and if it can block the virus from infecting the cells. These properties were examined for the 82 antibodies.

There is an advantage for developing antibody treatments from healthy people who have been vaccinated – it resolves the difficult issue of handling unscreened blood samples from human survivors in remote areas, where donors may potentially harbour Ebola or other infectious viruses such as hepatitis B or HIV.

The antibody mix from this study is also being studied for protection against the two other species of the Ebola virus – Sudan and Bundibugyo. These have caused significant outbreaks in the past.

Even if the particular combination of antibodies fails to treat these viruses, all is not lost. Antibodies from this study, combined with antibodies from other research groups which react to all species may provide a better treatment. Antibodies are also useful tools for studying the Ebola virus and human immune responses towards it. By tracking how antibodies attack cells, it’s possible to identify the vulnerable parts of the virus.