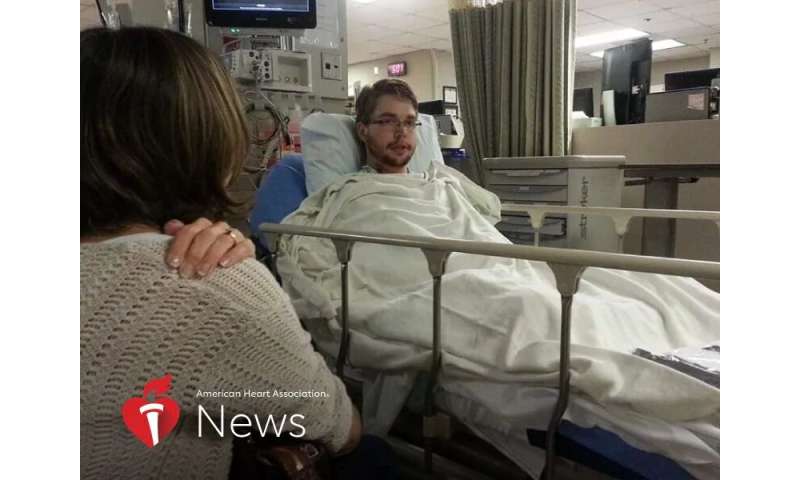 When Trenton Cary was 11 months old, mom Valerie could tell he didn’t feel well, so she scheduled a doctor’s appointment.

But she quickly realized it couldn’t wait. She and her husband, David, rushed their son to an emergency room—in the nick of time.

“He just stopped breathing in the ER,” David said.

Over the next few days, Trenton needed help breathing. At one point, he went into cardiac arrest, and “we lost him for nine minutes,” his father said.

Trenton’s heart was enlarged and not pumping well because of a condition known as dilated cardiomyopathy. His heart was failing. Doctors warned Trenton only had about two weeks to live, unless he could get a heart transplant.

“He’s holding on by a string,” a nurse told David.

Trenton went on the transplant list in March 1995 at Children’s Medical Center of Dallas. Doctors found a match within three days.

As Trenton was wheeled out of surgery, David and Valerie gazed at him and said, “Look at those lips!” They were so red, now that his blood flow was vastly improved.

David found out, in an indirect way, the identity of the baby whose heart was now inside his son. The boy had lived nearby, and David discreetly attended his funeral.

He was sad about the family’s loss yet thankful for his own son’s chance at life. “It was tough. … You feel so guilty.”

Nine days after his transplant, Trenton went home on his first birthday. His childhood with a healthy heart had begun.

Toward the end of high school, Trenton was diagnosed with cancer—Hodgkin lymphoma. Fortunately, it’s highly treatable.

He had chemotherapy and endured side effects like losing his hair and his taste for certain foods. He maintained an easygoing attitude and a sense of humor. As a heart patient, he was accustomed to doctors and “got used to being stuck.”

“It wasn’t that weird for me,” Trenton said. “I’m sure my mom was scared to death.”

When he couldn’t go to school, Trenton stayed home playing video games and eating chocolate pancakes. He also got a surprise from the Make-A-Wish Foundation.

He tried to give it away to a friend who had lost her mother to cancer, but it was designated for Trenton: Meeting the band Metallica. Trenton, his father and a friend were flown to Vancouver and put up in a fancy hotel, and they met the musicians.

He was soon cancer-free.

At the start of Trenton’s second year at the University of North Texas, he was hospitalized with an infection in his heart. Trenton’s body gradually began rejecting his transplanted heart. He would need another one.

One day, while visiting with a friend, the friend’s dog escaped.

“I booked it down the sidewalk” after the dog, Trenton said. He remembers feeling he needed to sit down. Then, he began to collapse. “I could tell something was happening, and it was not a good something.”

At the hospital, Trenton went into cardiac arrest. A chaplain prayed with Valerie and David.

Only nine hours after Trenton was placed on the transplant list, a donor heart was located. It came from a man in Florida, the family later learned.

At age 20, Trenton received his second transplanted heart on May 31, 2014. Just in time for summer break.

That fall, after cardiac rehabilitation, Trenton returned to college. During homecoming, he met Jessica Brewer. They married in June 2018. The couple honeymooned in one of Trenton’s favorite places—Vancouver, where he’d met Metallica.

His dad started the website www.stillthankful.com to help families dealing with serious illnesses by offering resources and telling his family’s survival story. David and Valerie have two other children, Austin and Allison.

David also is working on a book, does public speaking and emphasizes the importance of organ donation.

Trenton’s advice for others facing a difficult medical situation is to laugh a bit and not worry too much, especially if you can’t control the situation.

Mainly, he strives to live a healthy life.