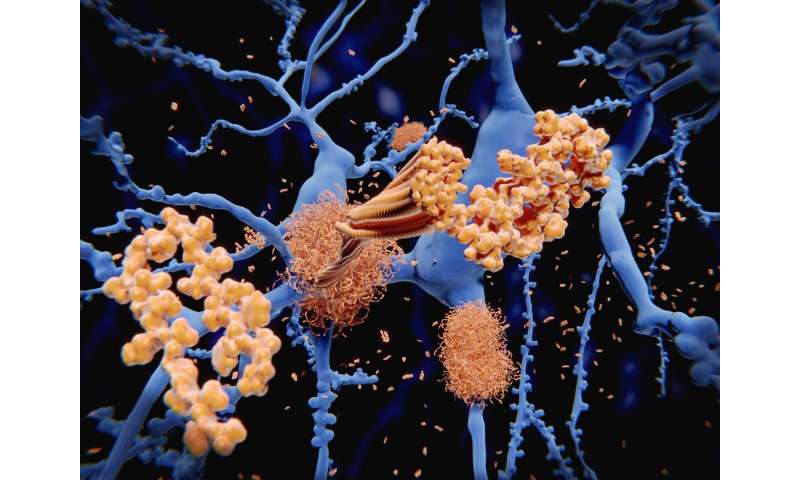 In a new study published in Proceedings of the National Academy of Sciences, researchers from the University of Colorado Denver and Binghamton University are the first to map the molecular structure and dynamics of an aggressive protein modification that spurs on Alzheimer’s disease.

“Roughly ten percent of Alzheimer’s disease cases are the result of identified mutations,” says Liliya Vugmeyster, Ph.D., associate professor in the department of chemistry, College of Liberal Arts & Sciences, at CU Denver. “But 90 percent of Alzheimer’s cases are not explained by these mutations, which is why we need to understand the molecular base of the disease.”

Alzheimer’s disease begins decades before the onset of symptoms. It starts the day microscopic, toxic protein fragments called beta amyloids (Aβ) glom onto each other. Those clumps form chains called fibrils, which band together to become a sticky, pleated sheet that builds on brain cells like plaque. As it accumulates, the plaque disrupts cell membranes and the communication between brain cells, causing them to die. Until now, understanding just the molecular makeup of the proteins—and the more aggressive subtypes that cause a rapid acceleration of the disease—has plagued researchers.

In this collaborative study with Wei Qiang, assistant professor of biophysical chemistry at Binghamton University, researchers targeted the structure and the dynamics of the aggressive, “seeding-prone” Ser-8-phosphorylated 40-residue Aβ (pS8-Aβ40) fibrils. They found that even when it existed in smaller amounts, pS8-Aβ40 acted as the alpha in structure polymorphism. It also had a higher level of cellular toxicity compared to other fibrils. In looking at the molecular structure, researchers found that the N-terminus, the creation point of the protein, played an important role in manipulating both the fibrils structures and the aggregation processes.

Vugmeyster, along with student Dan Fai Au, M.S., and Dmitry Ostrovsky, instructor in mathematical and statistical sciences, studied the flexibility of the fibrils. In previous research, Vugmeyster found that flexibility could be part of the control mechanism for plaque accumulation.

“Fibrils are very resilient to treatment that prevents aggregation,” says Vugmeyster. “Whatever you do to them in the test tubes, they adjust, find a way to go into a toxic state and aggregate.”