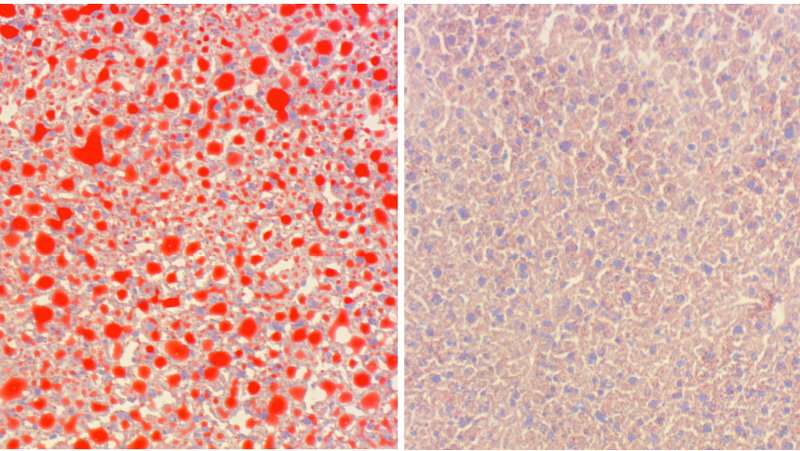 Eating too much fat and sugar causes weight gain and reduced health. But why is that, and is there a remedy? In a study published in the journal Cell, Prof. Jens Brüning’s research group at the Max Planck Institute for Metabolism Research in Cologne has shown that altering fat metabolism in the liver can make obese mice thinner despite eating an unhealthy diet. The process also improves the glucose metabolism of the mice. This is achieved by switching off a protein called ceramide synthase 6.

Adipose tissue stores fat. At some point, a prolonged diet that is too high in fats leads to fat storage in other places, like muscle tissue and the liver.

This can lead to fatty liver disease, insulin resistance, and ultimately, type 2 diabetes mellitus. Researchers have known for some time that this process involves a specific group of fats known as ceramides. These are produced in the body by various ceramide synthases.

“Other research groups have already shown that blocking ceramide production in mice prevents the development of insulin resistance. However, this is associated with a large number of side effects. If, for example, ceramide synthesis is completely inhibited, it can adversely affect the development of the animals,” explains Philipp Hammerschmidt, a doctoral student in Brüning’s research group and first author of the study. The researchers therefore investigated which of the various ceramide synthases are involved in the development of insulin resistance in the hope of providing more specific therapeutic targets.

They discovered that ceramide molecules of a particular length, formed by both ceramide synthases 5 and 6, accumulate in the liver when mice become obese on a high-fat diet. “Interestingly, only the genetic inactivation of ceramide synthase 6 in mice, resulted in protection from obesity, fatty liver, and insulin resistance. However, losing ceramide synthase 5 activity, did not have these effects,” explains Hammerschmidt.

“This was very surprising, as these two synthases produce exactly the same ceramide product but have completely different effects on the metabolism of the mice,” said Hammerschmidt. The scientists discovered that the two proteins are active at different locations within the cell. Ceramide synthase 6 regulates the ceramide content in mitochondria, the cell’s energy generators, influencing their structure and function.