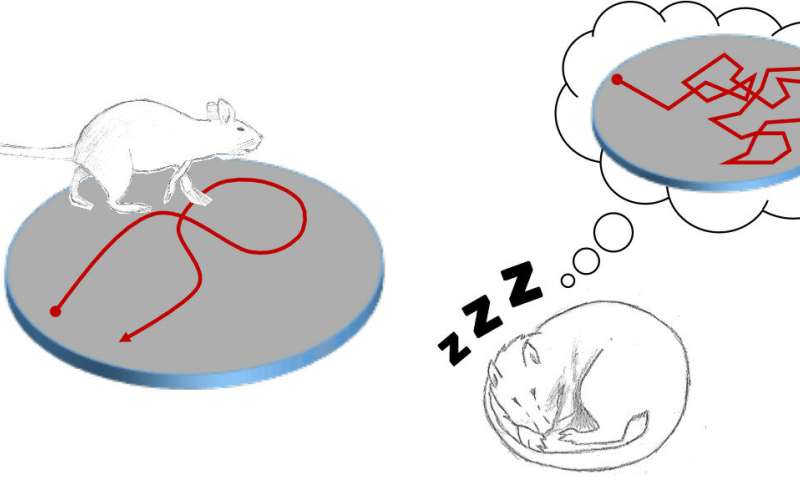 Sleep is far from an inactive time for the brain: while rats (and humans) are asleep, neurons in the hippocampus fire rapidly. After a rat has repeatedly moved from one spot to another, the same neurons that fired while the rat moved “replay” this firing while the rat is asleep, i.e. they fire in the same, but much quicker, pattern. Previously, it was thought that replay patterns only correspond to trips rats had made repeatedly while awake. Writing in Neuron today, Postdoc Federico Stella and Professor Jozsef Csicsvari at the Institute of Science and Technology Austria (IST Austria), show also that when rats roam around freely, the hippocampus replays during sleep, but it does so in a random manner that resembles the famous Brownian motion known from randomly moving particles.

Place cells are cells in the hippocampus that fire when we (or the rats performing the experiments) are in a certain location. In order to form a memory, to be able to recall it and make a decision, they need to replay the firing pattern during sleep. The replay is easy to see in the data and happens at a fast pace, Csicsvari explains: “When a rat is asleep, the hippocampus is silent. But suddenly, lots of place cells fire, then the hippocampus falls silent again. This firing is very time-compressed. One second of firing activity during wakefulness corresponds to about 10 milliseconds of firing when the animal is asleep.”

Previous studies focused on replay after rats visited locations in a maze in a certain order. They found that the order in which place cells fire corresponds to the rat’s movement, and this replay pattern was also observed during sleep. In the new study, Csicsvari and Stella instead investigated what happens when a rat moves through an open field environment, like a box. The researchers let the animals run around the environment while they dropped food rewards randomly, all the while recording how up to 400 place cells fire at the same time. They then recorded how the same place cells fired while the rat was asleep.

What they found was unexpected, Csicsvari says. “Neurons fire in places the rat has explored, but the place sequence expressed by the firing follows random trajectories. Surprisingly, these random trajectories are similar to Brownian motion, the random movement seen when particles move, collide and change direction.” A precise statistic defines whether a random process follows Brownian motion or not. “When we did the stats, we found that the replay patterns follow Brownian motion. But this didn’t coincide with the actual movement of the animal—the rat hadn’t run about randomly. Instead, the complex circuit of the hippocampus generates a pattern that is like a simple physical situation.”

This new finding was possible only because of the rapid advancement of recording techniques, says Stella. “Five years ago, it was thought that when a rat runs around randomly, only single places are replayed. Now that we can record from hundreds of place cells at the same time, we can distinguish firing between cells that are located close to each other—previously mistaken as the same area firing.”

Replay is an abstraction of experience

The random replay gives researchers an insight into the circuit dynamics of the hippocampus, Csicsvari explains. “In an experimental environment like ours, in which the animals don’t learn about the environment through, for example, hidden food rewards, the hippocampus generates firing trajectories on its own. Our work shows that the brain circuit itself has a complex dynamic, which influences how neurons fire. Experience probably acts as a constraint on what can possibly be replayed.”