People of all ages tend to misjudge the strength of other people’s emotions based on an egocentric bias, according to a new study by Associate Professor Hajimu Hayashi, Kobe University Graduate School of Human Development and Environment. The findings were published on June 1 in the Journal of Experimental Child Psychology.

Even if the end result is the same, the recipient of an action usually responds with stronger emotions if the actions are intentional rather than accidental. For example, if we compare a scenario in which B intentionally destroyed A’s treasured possession in front of A with a scenario in which B accidentally destroyed the possession, we assume that A is sadder if the action was intentional. In this case A sees B’s actions, so A knows B’s intentions. If A did not know B’s intentions, A would feel the same amount of sadness in both cases. But if we as a third party judge that A is sadder if B intentionally destroyed A’s possession, we are interpreting another person’s emotions based on knowledge that only we have (the intentions of B), and egocentric bias is taking place.

This study looked at whether egocentric bias occurs in emotional understanding, and potential differences based on age and positive or negative contexts. The participants were 106 children age 8-9, 108 children age 11-12, 122 children age 15-16, and 154 adults.

The research team prepared four pairs of stories. Two pairs featured negative context in which the protagonists were harmed by the actors and felt sad, and the other two pairs featured positive contexts in which the protagonists were helped by the actors and felt happy. The only difference between each pair of scenarios was whether the actions were intentional or accidental (see Figure 1).

Two conditions were prepared in terms of the knowledge or ignorance of the protagonists. In the knowledge condition, the protagonists in both stories watched the actors and therefore knew that the actors intentionally or accidentally harmed or helped. In the ignorance condition, the protagonists in both stories did not watch the actors and therefore did not know their intentions. After some fact-checking questions, the researchers quizzed the participants with questions about emotional understanding, such as “Which girl is sadder at the end of each story?” 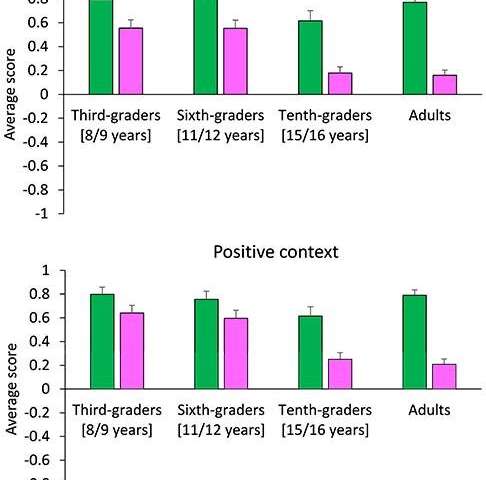 Scores were assigned based on the results of these questions, and they calculated average scores for two pairs of the stories in each of the negative and the positive contexts (Figure 2).

0: The participant judged that both protagonists are equally sad (negative context), or equally happy (positive context)